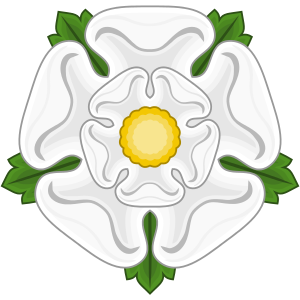 Yorkshire Rose, the heraldic device of the House of York 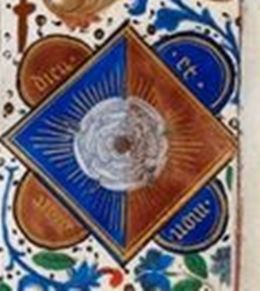 White Rose of York, from a manuscript of Edward IV of England

The White Rose of York (also called the Rose alba or rose argent), a white heraldic rose, is the symbol of the House of York and has since been adopted as a symbol of Yorkshire as a whole.[1]

The origins of the emblem are said to go back to Edmund of Langley in the fourteenth century (although other reports suggest the rose and Yorkshire have links going back way further than that.), the first Duke of York and the founder of the House of York as a cadet branch of the then ruling House of Plantagenet.[2] The actual symbolism behind the rose has religious connotations as it represents the Virgin Mary, who is often called the Mystical Rose of Heaven.[2] The Yorkist rose is white in colour, because in Christian liturgical symbolism, white is the symbol of light, typifying innocence and purity, joy and glory.[3]

During the civil wars of the fifteenth century, the White Rose was the symbol of Yorkist forces opposed to the rival House of Lancaster. The red rose of Lancaster would be a later invention used to represent the House of Lancaster, but was not in use during the actual conflict.[2] The opposition of the two roses gave the wars their name: the Wars of the Roses which was coined in the 19th century. The conflict was ended by King Henry VII of England, who symbolically united the White and Red Roses to create the Tudor Rose, symbol of the Tudor dynasty. In the late Seventeenth Century the Jacobites took up the White Rose of York as their emblem, celebrating "White Rose Day" on 10 June, the anniversary of the birth of James III and VIII in 1688.[4]

At the Battle of Minden on 1 August 1759, Yorkshiremen of the King's Own Yorkshire Light Infantry's predecessor the 51st Regiment picked white roses from bushes near to the battlefields as a tribute to their fallen comrades who had died.[2] They stuck the plucked white roses in their coats as a tribute.[5] Yorkshire Day is held on this date each year.[2]

The Yorkist Rose was engraved on the coffin holding the remains of King Richard III, the last Yorkist king of England and the last to die leading his troops in battle, interred at Leicester Cathedral on 26 March 2015. The coffin was made by Michael Ibsen, a distant relative of the king, whose DNA helped to prove his identity. 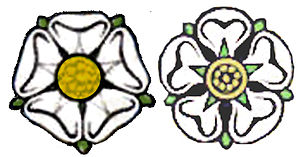 The white rose of York, when depicted at small sizes is rendered more simply as a graphic image.

More than 20 civic entities in Yorkshire have a coat of arms that includes the rose of York.[6] When depicted at small size it is rendered more simply, more as a graphic image.

The Yorkist rose is used in the seal of the City of York, Pennsylvania, which is known as White Rose City. The town's minor league baseball team, which played in different leagues for several decades, was called the York White Roses.

The York Rose features on the shield of Canada's York University.

Queens County, New York uses the white and red rose on the county flag. Queens County was named after Queen consort Catherine of Braganza, spouse of Charles II who sent a fleet to New York in 1664 to recapture New Amsterdam from the Dutch and renamed New York for the Duke of York, James brother of Charles II.