The White Tiger is one of the Four Symbols of the Chinese constellations. It is sometimes called the White Tiger of the West (西方白虎, Xī Fāng Bái Hǔ), and is known as Bai Hu in Chinese, Byakko in Japanese, Baekho in Korean and Bạch Hổ in Vietnamese. It represents the west and the autumn season.

As the other three symbols, there are seven astrological mansions, or positions, of the moon within White Tiger. The names and determinative stars are:[1][2]

In Chinese culture, the tiger is the king of the beasts and has been presented with a 王 on his forehead for centuries. According to legend, the tiger's tail would turn white when it reached the age of 500 years. In this way, the white tiger became a kind of mythological creature. It was said that the white tiger would only appear when the emperor ruled with absolute virtue, or if there was peace throughout the world. Because the color white of the Wu Xing theory also represents the west, the white tiger became a mythological guardian of the west.[citation needed]

In the novel Tales of the Tang dynasty (Chinese: 隋唐演義), the reincarnation of the White Tiger's star is said to be General Luo Cheng (羅成 / 罗成), who served the Wagang Army (瓦岗军) and later Li Shimin, and the reincarnation of the Azure Dragon's star is said to be the rebellious General Dan Xiongxin (單雄信 / 单雄信, his surname 單 can be pronounced as Dān, Chán, or Shàn), who served Wang Shichong. They two are sworn brothers of Qin Shubao and Cheng Yaojin. Their souls after death are said to possess the body of the new heroes of the Tang and Goguryeo dynasties, Xue Rengui (薛仁貴 / 薛仁贵) and Yeon Gaesomun (渊盖苏文)[citation needed] 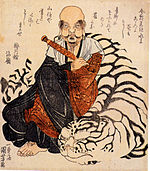 Hattara Sonja with the White Tiger.