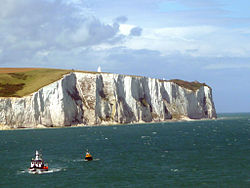 The White Cliffs of Dover

The cliffs seen across the channel from Cap Gris Nez, France 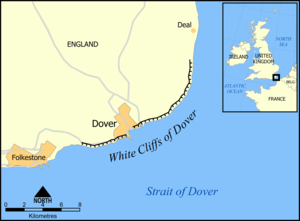 The location and extent of the White Cliffs of Dover.

The White Cliffs of Dover are cliffs that form part of the English coastline facing the Strait of Dover and France. The cliffs are part of the North Downs formation. The cliff face, which reaches up to 350 feet (110 m),[1] owes its striking façade to its composition of chalk accentuated by streaks of black flint. The cliffs spread east and west from the town of Dover in the county of Kent, an ancient and still important English port.

The cliffs have great symbolic value in Britain because they face towards Continental Europe across the narrowest part of the English Channel, where invasions have historically threatened and against which the cliffs form a symbolic guard. Because crossing at Dover was the primary route to the continent before the advent of air travel, the white line of cliffs also formed the first or last sight of England for travellers.

During the summer of 1940, reporters gathered at Shakespeare Cliff to watch aerial dogfights between German and British aircraft during the Battle of Britain.[3] It marks the point where Great Britain most closely approaches continental Europe. On a clear day, the cliffs are easily visible from the French coast.

In 1999 a sustainable National Trust visitor centre was built in the area. The Gateway building was designed by van Heyningen and Haward Architects and houses a restaurant, an information centre on the work of the National Trust, and details of local archaeology, history and landscape.[4] 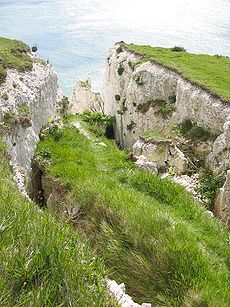 Evidence of erosion along the cliff top 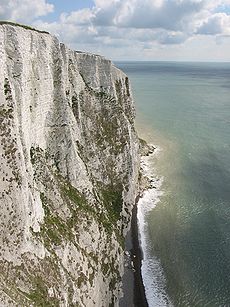 Close up of the cliffs from the walk along the ridge 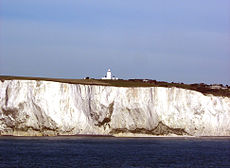 South Foreland lighthouse above the cliffs at Dover

The cliffs are composed mainly of soft, white chalk with a very fine-grained texture, composed primarily of coccoliths, plates of calcium carbonate formed by coccolithophores, single-celled planktonic algae whose skeletal remains sank to the bottom of the ocean during the Cretaceous and, together with the remains of bottom-living creatures, formed sediments. Flint and quartz are also found in the chalk.[5] White cliffs like those of Dover are also found on the Danish islands of Møn and Langeland and the island of Rügen in Germany. The chalk cliffs of the Alabaster Coast of Normandy, France, are part of the same geological system as Dover's cliffs. In a 2005 poll of Radio Times readers, the cliffs were named as the third greatest natural wonder in Britain.

The cliff face continues to weather at an average rate of 1 centimetre (0.39 in) per year, although occasionally large pieces will fall. This occurred in 2001, when a large chunk of the edge, as large as a football pitch, fell into the channel.[6] A further large section collapsed into the English Channel on 15 March 2012.[7] Visitors are, therefore, urged to remain well away from the cliff edge.

The cliffs themselves were formed at the same time as the Strait of Dover, by ice-age floods.

Several species of cliff nesting birds nest on the cliff face, including fulmar and colonies of black-legged kittiwake. However, contrary to the words of the World War II song "White Cliffs of Dover", bluebirds are an American species not found in the UK.