The four common allotropes of phosphorus

Elemental phosphorus can exist in several allotropes, the most common of which are white and red solids. Solid violet and black allotropes are also known. Gaseous phosphorus exists as diphosphorus and atomic phosphorus. 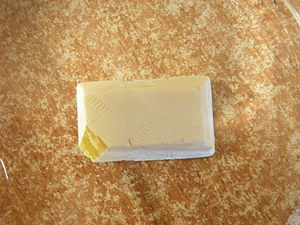 White phosphorus, yellow phosphorus or simply tetraphosphorus (P4) exists as molecules made up of four atoms in a tetrahedral structure. The tetrahedral arrangement results in ring strain and instability. The molecule is described as consisting of six single P–P bonds. Two different crystalline forms are known. The α form, which is stable under standard conditions, has a body-centered cubic crystal structure. It transforms reversibly into the β form at 195.2 K. The β form is believed to have a hexagonal crystal structure.[1]

White phosphorus is a translucent waxy solid that quickly becomes yellow when exposed to light. For this reason it is also called yellow phosphorus. It glows greenish in the dark (when exposed to oxygen), is highly flammable and pyrophoric (self-igniting) upon contact with air as well as toxic (causing severe liver damage on ingestion and phossy jaw from chronic ingestion or inhalation). The odour of combustion of this form has a characteristic garlic smell, and samples are commonly coated with white "diphosphorus pentoxide", which consists of P4O10 tetrahedral with oxygen inserted between the phosphorus atoms and at their vertices. White phosphorus is only slightly soluble in water and it can be stored under water. Indeed, white phosphorus is only safe from self-igniting when it is submerged in water. It is soluble in benzene, oils, carbon disulfide, and disulfur dichloride.

The white allotrope can be produced using several different methods. In the industrial process, phosphate rock is heated in an electric or fuel-fired furnace in the presence of carbon and silica.[2] Elemental phosphorus is then liberated as a vapour and can be collected under phosphoric acid. An idealized equation for this carbothermal reaction is shown for calcium phosphate (although phosphate rock contains substantial amounts of fluoroapatite): 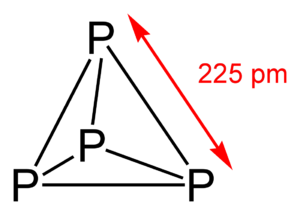 White phosphorus has an appreciable vapour pressure at ordinary temperatures. The vapour density indicates that the vapour is composed of P4 molecules up to about 800 °C. Above that temperature, dissociation into P2 molecules occurs.

It ignites spontaneously in air at about 50 °C (122 °F), and at much lower temperatures if finely divided. This combustion gives phosphorus (V) oxide:

Because of this property, white phosphorus is used as a weapon.

Although white phosphorus converts to the thermodynamically more stable red allotrope, the formation of the cubic P8 molecule is not observed in the condensed phase. Derivatives of this hypothetical molecule have been prepared from phosphaalkynes.[3] 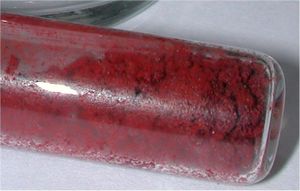 Red phosphorus can be used as a very effective flame retardant, especially in thermoplastics (e.g. polyamide) and thermosets (e.g. epoxy resins or polyurethanes). The flame retarding effect is based on the formation of polyphosphoric acid. Together with the organic polymer material, this acid creates a char which prevents the propagation of the flames. The safety risks associated with phosphine generation and friction sensitivity of red phosphorus can be effectively reduced by stabilization and micro-encapsulation. For easier handling, red phosphorus is often used in form of dispersions or masterbatches in various carrier systems.

Monoclinic phosphorus, or violet phosphorus, is also known as Hittorf's metallic phosphorus.[4][5] In 1865, Johann Wilhelm Hittorf heated red phosphorus in a sealed tube at 530 °C. The upper part of the tube was kept at 444 °C. Brilliant opaque monoclinic, or rhombohedral, crystals sublime. Violet phosphorus can also be prepared by dissolving white phosphorus in molten lead in a sealed tube at 500 °C for 18 hours. Upon slow cooling, Hittorf's allotrope crystallises out. The crystals can be revealed by dissolving the lead in dilute nitric acid followed by boiling in concentrated hydrochloric acid.[6] In addition, a fibrous form exists with similar phosphorus cages.

It does not ignite in air until heated to 300 °C and is insoluble in all solvents. It is not attacked by alkali and only slowly reacts with halogens. It can be oxidised by nitric acid to phosphoric acid.

If it is heated in an atmosphere of inert gas, for example nitrogen or carbon dioxide, it sublimes and the vapour condenses as white phosphorus. If it is heated in a vacuum and the vapour condensed rapidly, violet phosphorus is obtained. It would appear that violet phosphorus is a polymer of high relative molecular mass, which on heating breaks down into P2 molecules. On cooling, these would normally dimerize to give P4 molecules (i.e. white phosphorus) but, in vacuo, they link up again to form the polymeric violet allotrope. 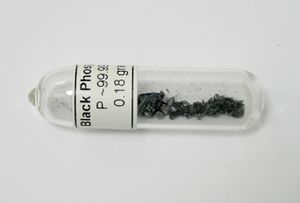 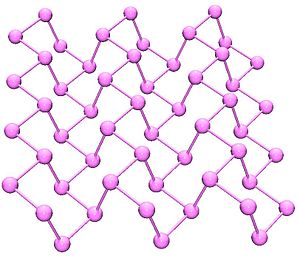 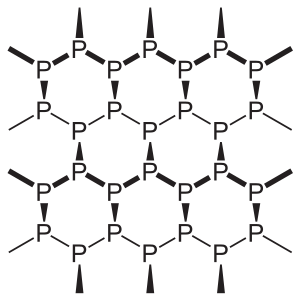 Black phosphorus is the thermodynamically stable form of phosphorus at room temperature and pressure. It is obtained by heating white phosphorus under high pressures (12,000 atmospheres). In appearance, properties, and structure, black phosphorus is very much like graphite with both being black and flaky, a conductor of electricity, and having puckered sheets of linked atoms. Phonons, photons, and electrons in layered black phosphorus structures behave in a highly anisotropic manner within the plane of layers, exhibiting strong potential for applications to thin film electronics and infrared optoelectronics.[7] Light absorption in black phosphorus is sensitive to the polarization of incident light, film thickness, and doping.[8][9] Black phosphorus photo-transistors exhibit hyper-spectral detection attributes in the infrared and visible spectrum.[10][11]

Black phosphorus has an orthorhombic structure and is the least reactive allotrope, a result of its lattice of interlinked six-membered rings where each atom is bonded to three other atoms.[12][13] Black and red phosphorus can also take a cubic crystal lattice structure.[14] A recent synthesis of black phosphorus using metal salts as catalysts has been reported.[15]

The similarities to graphite also include the possibility of scotch-tape delamination (exfoliation), resulting in phosphorene, an anisotropic, graphene-like material with excellent charge transport properties [16][17][18] and high (~100 Wm−1K−1) thermal conductivity.[19] Exfoliated black phosphorus oxidizes when exposed to water and oxygen,[20][21] and sublimes at 400 °C in vacuum.[22] It has recently been shown that high-quality, few-layer black phosphorus nanosheets can be produced in large quantities by liquid phase exfoliation.[23][24] 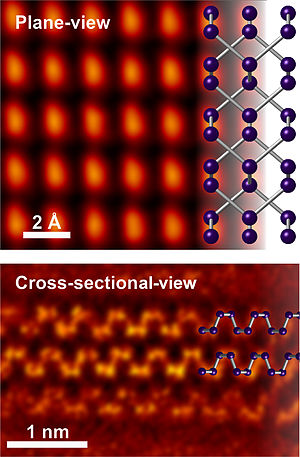 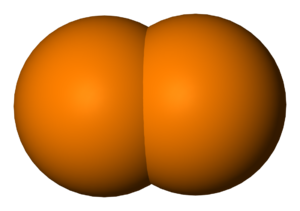 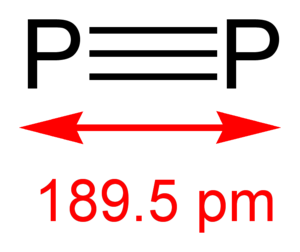 The diphosphorus allotrope (P2) can normally be obtained only under extreme conditions (for example, from P4 at 1100 kelvin). In 2006, the diatomic molecule was generated in homogenous solution under normal conditions with the use of transition metal complexes (for example, tungsten and niobium).[25]

Diphosphorus is the gaseous form of phosphorus, and the thermodynamically stable form between 1200 °C and 2000 °C. The dissociation of tetraphosphorus (P
4) begins at lower temperature: the percentage of P
2 at 800 °C is ≈ 1%. At temperatures above about 2000 °C, the diphosphorus molecule begins to dissociate into atomic phosphorus.

Red/brown phosphorus was shown to be stable in air for several weeks and have significantly different properties from red phosphorus. Electron microscopy showed that red/brown phosphorus forms long, parallel nanorods with a diameter between 3.4 Å and 4.7 Å.[26]