From Infogalactic: the planetary knowledge core
Jump to: navigation, search
For his grandson of the same name (and also a journalist), see Whitelaw Reid (journalist).

Whitelaw Reid (October 27, 1837 – December 15, 1912) was an American politician and newspaper editor, as well as the author of a popular history of Ohio in the Civil War. After assisting Horace Greeley as editor of the powerful Republican newspaper, the New York Tribune, Reid purchased the paper after Greeley's death in 1872 and controlled it until his own death. The circulation grew to about 60,000 a day, but the weekly edition became less important. He invested heavily in new technology, such as the Hoe printing press and the Linotype machine, but bitterly fought against the unionized workers for control of his shop. As a famous voice of the Republican Party, he was honored with appointments as ambassador to France (1889) and Great Britain (1905), as well as numerous other honorific positions. In 1898 President William McKinley appointed him to the American commission that negotiated peace with Spain after the Spanish-American War.[1]

Born on a farm near Xenia, Ohio, Reid attended Xenia Academy and went on to graduate from Miami University with honors in 1856.[2] At Miami, he was a member of Delta Kappa Epsilon (Kappa chapter), and lobbied for the expulsion of the six members who ultimately founded Sigma Chi.

He was the grandfather of prominent journalist and New York Herald Tribune editor Whitelaw Reid. 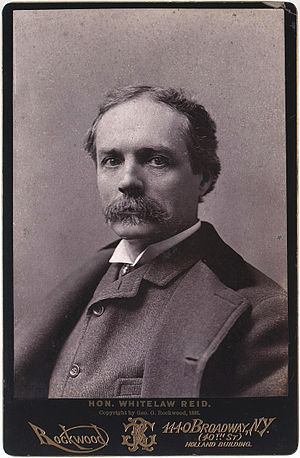 He was the longtime editor of the New York Tribune and a close friend of Horace Greeley. He was a leader of the Liberal Republican movement in 1872.

During the war he wrote under the by-line "Agate".

In 1892, Reid became the Republican vice presidential nominee when President Benjamin Harrison chose to drop Vice President Levi P. Morton from the ticket. Harrison and Reid lost to the Democratic ticket of Grover Cleveland and Adlai Stevenson, as Cleveland became the first former president to recapture the office.

Reid was given a spot on the peace commission following the Spanish–American War. Manhattanville College in Purchase, New York, is located on his former Westchester County estate.

Reid Continue to the role of the Tribune As one of the foremost Republican newspapers in the country. He emphasized the importance of partisan newspapers in a speech in 1879:

The true statesman and the really influential editor are those who are able to control and guide parties....There is an old question as to whether a newspaper controls public opinion or public opinion controls the newspaper. This at least is true: that editor best succeeds who best interprets the prevailing and the better tendencies of public opinion, and, who, whatever his personal views concerning it, does not get himself too far out of relations to it. He will understand that a party is not an end, but a means; will use it if it lead to his end, -- will use some other if that serve better, but will never commit the folly of attempting to reach the end without the means....Of all the puerile follies that have masqueraded before High Heaven in the guise of Reform, the most childish has been the idea that the editor could vindicate his independence only by sitting on the fence and throwing stones with impartial vigor alike at friend and foe.[3]

He received the degree LL.D. honoris causa from the University of Cambridge in June 1902, when he was in the United Kingdom as Special Ambassador to attend the Coronation of King Edward VII.[4]