Over its course, Whitemud Drive passes at-grade signalized intersections at Winterburn Road (215 Street) and Lewis Estates Boulevard/Guardian Road in the west before passing under the western leg of Anthony Henday Drive (Highway 216), to which access is provided via an interchange. 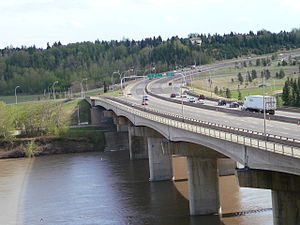 Quesnell Bridge carrying Whitemud Drive over the North Saskatchewan River, prior to its widening completed in 2011

The last recent at-grade intersection to be upgraded to an interchange was 17 Street. The overpass has two lanes open in each direction. The construction was completed in 2013.[3] As a result, Whitemud Drive is now free-flowing within the bounds of Anthony Henday Drive.

From west to east. All exits are unnumbered.