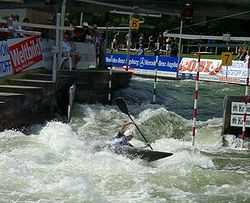 Whitewater slalom (canoe/kayak slalom since November 2008) is a competitive sport where the aim is to navigate a decked canoe or kayak through a course of hanging gates on river rapids in the fastest time possible. It is one of the two kayak and canoeing disciplines at the Summer Olympics, and is referred to by the International Olympic Committee (IOC) as Canoe/Kayak slalom. The other Olympic canoeing discipline is canoe sprint. There is also wildwater, a non-Olympic paddlesport.

Whitewater slalom racing started in Europe and in the 1940s, the International Canoe Federation (ICF) was formed to govern the sport. The first World Championships were held in 1949 in Switzerland. From 1949 to 1999, the championships were held every odd-numbered year and have been held annually in non-Summer Olympic years since 2002. Folding kayaks were used from 1949 to 1963; and in the early 1960s, boats were made of fiberglass, and nylon. Boats were heavy, usually over 65 pounds (30 kilos). With the advent of kevlar and carbon fiber being used in the 1970s, the widths of the boats were reduced by the ICF, and the boats were reduced in volume to pass the gates, and boats have become much lighter and faster.

From 1949 to 1977, all World Championships were held in Europe. The first World Championship held in North America was held at Jonquiere, in Quebec, Canada in 1979. It has been a regular Olympic sport since 1992.[1]

Each gate consists of one or two poles hanging from a wire strung across the river. There are 18-25 (although nowadays there are more often near 18 than 25), of which 6-7 must be upstream gates, numbered gates in a course and they are colored as either green (downstream) or red (upstream), indicating the direction they must be negotiated. Upstream gates are always placed in eddies, where the water is flat or moving slightly upstream; the paddler eddies out from the main current and paddles upstream through the gate. Downstream gates may also be placed in eddies, to increase the difficulty, and downstream gates in the current can be offset to alternating sides of the current, requiring rapid turns in fast-moving water.

Most slalom courses take 80 to 120 seconds to complete for the fastest paddlers. Depending on the level of competition, difficulty of course, degree of water turbulence and ability of the other paddlers, times can go up to 200 seconds.

In international competitions (World Cups, World Championships, Olympic Games) each competitor does two runs in the qualification round, called the "heats"; the time of the faster run gives the qualification result. Depending on the number of participants in the event, 10 to 40 boats make it through to the semi-final; this consists of one run on a different course. The fastest semi-final boats, the number determined by the number of participants, make it through to the final, where they navigate the semi-final course once more. Their ranking within the final group is based on the time of that last run alone.[2]

If the competitor's boat, paddle or body touches either pole of the gate, a time penalty of two seconds is added. If the competitor misses a gate completely, displaces it by more than 45 degrees, goes through the gate upside-down, or goes through it in the wrong order, a 50 second penalty is given. Only one penalty can be incurred on each gate, and this will be taken as the highest one. 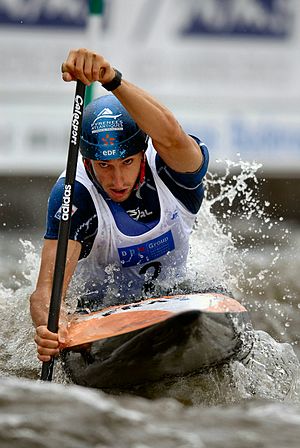 There are currently 4 Olympic Medal events:

In the 1960s and early 1970s, boats were made of heavy fiberglass and nylon. The boats were high volume and weighed over 65 pounds (30 kilos). In the early 1970s Kevlar was used and the boats became lighter as well as the volume of the boats was being reduced almost every year as new designs were made. A minimum boat weight was introduced to equalize competition when super light materials began to affect race results. The I.C.F also reduced the width of the boats in the early 1970s. The gates were hung about 10 cm above the water. When racers began making lower volume boats, the gates were raised in response to fears that new boats would be of such low volume as to create a hazard to the paddler. Their low volume sterns allow the boat to slice through the water in a quick turn, or 'pivot'.

Typically, new racing boats cost between $1,200 and $2,500 (or £650 onwards for the cheapest constructions in fiberglass). Usually boats are made with carbon fiber, Kevlar, and fiberglass cloth, using epoxy or polyester resin to hold the layers together. Foam sandwich construction in between layers of carbon, Kevlar, or Aramid is another technique in use to increase the stiffness of slalom boats.

Recently, the minimum length of these boats were reduced from 4 meters down to 3.5 meters, causing a flurry of new, faster boat designs which are able to navigate courses with more speed and precision. The shorter length also allows for easier navigation and less boat damage in the smaller man made river beds that are prevalent in current elite competitions.

Boat design progression is rather limited year to year. Directly from the 2013 ICF Canoe Slalom Rules: [2]

7.1.3 All boats must have a minimum radius at each end of 2 cm horizontally and 1 cm vertically.
7.1.4 Rudders are prohibited on all boats
7.1.5 Boats must be designed to, and remain within, the required dimensions.
7.1.6 Kayaks are decked boats, which must be propelled by double bladed paddles and inside which the competitors sit. Canadian canoes are decked boats that must be propelled by single-bladed paddles and inside which the competitors kneel.

There are rules governing almost every aspect of slalom equipment used in major competition, including sponsor advertisement. Some of these rules vary from country to country; each national canoe and kayak governing body publishes its own variation of the rules.

Slalom courses are usually on Class II - IV whitewater. Some courses are technical, containing many rocks. Others are on stretches containing fewer rocks and larger waves and holes.

Slalom canoeing made its Olympic debut in 1972 in Augsburg, W. Germany. It was not seen again until 1992 in Seu d'Urgell as part of the Barcelona games. Since then, slalom paddling has been a regular at the Olympics.[1]