Whittlesey, historically known as Whittlesea (as the name of the railway station is currently spelt) or Witesie, is an ancient Fenland market town around six miles (10 km) east of Peterborough in the county of Cambridgeshire in England. With the neighbouring parishes of Coates, Eastrea and Pondersbridge, it has an approximate population of 15,000.

Whittlesey is located between the city of Peterborough, 6 miles (10 km) to the west and the town of March, 11 miles (18 km) to the east, and is bordered to the north by the River Nene and to the south by Whittlesey Dyke. Historically it was connected to Peterborough and March by the Roman road Fen Causeway constructed in the first century AD, a route approximately followed by the modern A605. The rail station is on the Ely to Peterborough Line (historically the Great Eastern Line), with direct trains to Cambridge, Birmingham, Liverpool, Leicester, Stansted Airport, Ely, Ipswich and Peterborough. 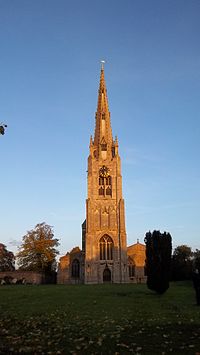 The spire of St. Mary's church viewed from the west

Whittlesey appears in the Cartularium Saxonicum (973 A.D.) as Witlesig, in the Domesday Book as Witesie, and in the Inquisitio Eliensis[2] (1086 A.D.) as Wittleseia. The meaning is "Wit(t)el’s island", deriving from either Witil, "the name of a moneyer", or a diminutive of Witta, a personal name; + "eg", meaning "'island', also used of a piece of firm land in a fen."[3]

Before the draining of the fens, Whittlesey was an island of dry ground surrounded by the marshy fens. Excavations of nearby Flag Fen indicate thriving local settlements as far back as 1000 BC. At Must Farm quarry, a Bronze Age settlement is described as 'Britain's Pompeii' due to its relatively good condition.[4] As of 2016[update], it is being excavated by the University of Cambridge's Cambridge Archaeological Unit.[5] At Must Farm many homes of 3000 years in age have been found along with Britain's most complete prehistoric wooden wheel, dating back to the late Bronze Age.

In more recent times Whittlesey was linked to Peterborough in the west and March in the east by the Roman Fen Causeway, probably built in the 1st century AD, and Roman artefacts have been recovered at nearby Eldernell.[citation needed] A Roman skeleton was discovered in the nearby village of Eastrea during construction of its village hall in 2010.[6]

Until it was drained in 1851, nearby Whittlesey Mere was a substantial lake surrounded by marsh. According to the traveller Celia Fiennes, who saw it in 1697, the mere was "3 mile broad and six mile long. In the midst is a little island where a great store of Wildfowle breed.... The ground is all wett and marshy but there are severall little Channells runs into it which by boats people go up to this place; when you enter the mouth of the Mer it looks formidable and its often very dangerous by reason of sudden winds that will rise like Hurricanes...."[7] The town is still accessible by water, connected to the river Nene by King's Dyke which forms part of the Nene-Ouse Navigation link. Moorings can be found at Ashline Lock alongside the Manor Leisure Centre's cricket and football pitches.[citation needed]>

Whittlesey was noted for its brickyards, around which the former hamlet of King's Dyke was based for much of the 20th Century, although only one now remains following the closure of the Saxon brickworks in 2011.[8]

The local clay soil was also used to make mud boundary walls during a period in which there was a tax on bricks, some examples of these roofed walls still stand today and are unique in Fenland.

Whittlesey was also infamous for its number of public houses; folk lore dictates that, at one time, there were 52 - one for each week of the year.[9] In 1797, a local farmer, when writing his diary, noted that 'they like drinking better than fighting in Whittlesea'.[10]

In other history, Whittlesey was an important trade route in the late Bronze Age ( about 1100-800 BC), where civilisations traded with many places, including the Balkans. Such evidence is clear at the important archeological site of Must Farm, where log boats, roundhouses, bowls with food in them, and the most complete wooden wheel were housed.

St Mary's church dates back to the fifteenth century, but the majority of the building is later, and the church now boasts one of the largest buttressed spires in Cambridgeshire.[11] The church contains a chapel (formerly a school-room) which was restored in 1862 as a memorial to Sir Harry Smith.[12]

St Andrew's is a mixture of perpendicular and decorated styles and has records back to 1635.[13]

The Market Place, located in the centre of Whittlesey, is still the site of the town's market, held every Friday. A right to hold a weekly market was first granted in 1715, although there have been several periods since then during which the market did not function, for example from the late 1700s until c. 1850.[14] Because of the nearby city of Peterborough, the market is no longer of great importance to the town.[14]

Situated in the centre of the Market Place is the Buttercross dating back to 1680. Originally a place for people to sell goods at market, the structure was considered useless in the 1800s and was only saved from demolition when a local businessman donated some slate tiles for the roof. In more recent years it served as a bus shelter, until the controversial relocation of bus services from the Market Place to a purpose-built terminal in Grosvenor Road.[15]

Looking north over the Market Place from the spire of St. Mary's during the 2012 Whittlesey Festival

The 'Whittlesey Summer Festival', held annually in September, takes over much of the town centre. Attractions in recent years included a large classic car display, a large Italian Food stall, fairground rides, a steam engine, and in 2009, a flying display by a Hawker Hurricane of the Battle of Britain Memorial Flight.[16] An art competition, for students of Sir Harry Smith Community College also runs with the festival, with entries displayed throughout the day in the Whittlesey Christian Church. 2009 also saw the people of Whittlesey raise £10,000 for bushfire victims in Whittlesea, Melbourne.[17]

From 2011 to 2015 the town was the location of a long-running planning battle between rival supermarket chains Tesco and Sainsbury's, who competed to build on neighbouring sites on Eastrea Road. Dubbed 'Supermarket-gate' by local press, the dispute was eventually resolved when Sainsbury's won approval for their supermarket, business park and country park development in June 2015.[18] Plans for over 400 houses on an adjacent site, construction of which began in late 2014,[19] also generated some controversy when approved[20] due to concerns about the additional traffic generated on the A605.

The town has one secondary school, Sir Harry Smith Community College (opened in 1953 on the site of Whittlesey Workhouse),[22] and three primary schools. There is also another primary school in the neighbouring village of Coates.

Whittlesey Museum is located in the Old Town Hall and contains collections relating to the natural and cultural heritage of Whittlesey and the surrounding area.[23] 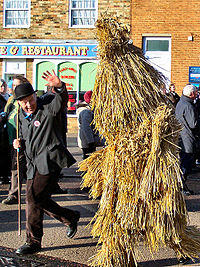 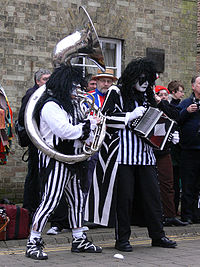 The festival of the Straw Bear or "Strawbower" is an old custom known only from a small area of Fenland on the borders of Huntingdonshire and Cambridgeshire, including Ramsey Mereside.[24] (Similar ritual animals have been known in other parts of Europe, and still appear in parts of Germany at Shrovetide.[25][26][27][28])

On Plough Tuesday, the day after Plough Monday (the first Monday after Twelfth Night), a man or boy was covered from head to foot in straw and led from house to house where he would dance in exchange for gifts of money, food or beer. The festival was of a stature that farmers would often reserve their best straw for the making of the bear.[29]

The custom died out early in the 20th century, c.1909 (probably because the local police regarded it as begging), but it was resurrected by the Whittlesea Society in 1980.[29]

The festival has now expanded to cover the whole weekend when the Bear appears (not Plough Tuesday nowadays, but the second weekend in January instead). On the Saturday of the festival, the Bear processes around the streets with its attendant "keeper" and musicians, followed by numerous traditional dance sides (mostly visitors), including morris men and women, molly dancers, rapper and longsword dancers, clog dancers and others, who perform at various points along the route.[29]

The Bear dances to a tune (reminiscent of the hymn "Jesus Bids us Shine") which featured on Rattlebone and Ploughjack, a 1976 LP by Ashley Hutchings,[30] along with a spoken description of the original custom (which partly inspired the Whittlesey revival).

'Sessions' of traditional music take place in many of the public houses during the day and evening, and a barn dance or ceilidh and a Cajun dance round off the Saturday night.[31] The bear "costume" is burned at a ceremony on Sunday lunchtime[32] (just as, in Germany, the Shrovetide bear costumes are also ceremonially burned after use).[33]

The Whittlesea Straw Bear and Keeper are featured on the album art of The Young Knives' album, Voices of Animals and Men.

Sir Harry George Waklyn Smith (1788–1860), whose life has been the subject of several books, and is best known for his role in the Battle of Aliwal (India), was born in Whittlesey. His military career saw him rise from a rifleman to the rank of Major General, and Baronet of Aliwal. He was governor of the Cape of Good Hope from 1847-1852 during a period of intense unrest.

He featured in Rifles by Mark Urban, about the 95th Rifles Napoleonic campaigns through Spain to Waterloo during which time he was a junior officer and served with his two brothers.[citation needed]

Sir Harry is commemorated throughout the Whittlesey area, giving his name to the Sir Harry Smith Community College and community centre, among others, and with a bust in St Mary's church. There is also a pub named "The Hero of Aliwal" and a street named 'Aliwal Road' in his honour. The house in which he was born bears a plaque with his name written on it. At the time of his death, this building was being used as a school, but, at present, is a private house.[34] He is buried in the local cemetery.

Another famous son of Whittlesey is the renowned author L. P. Hartley.

EastEnders actor David Proud, the first disabled actor to have a regular disabled role in the show, lived in Whittlesey and attended Sir Harry Smith Community College. The Supportive Skills department at the school is named 'The David Proud Suite' in his honour.[35]