The whooping crane (Grus americana), the tallest North American bird, is an endangered crane species named for its whooping sound. In 2003, there were about 153 pairs of whooping cranes. Along with the sandhill crane, it is one of only two crane species found in North America. The whooping crane's lifespan is estimated to be 22 to 24 years in the wild. After being pushed to the brink of extinction by unregulated hunting and loss of habitat to just 21 wild and two captive whooping cranes by 1941, conservation efforts have led to a limited recovery. As of 2011, there are an estimated 437 birds in the wild and more than 165 in captivity.[2][3] 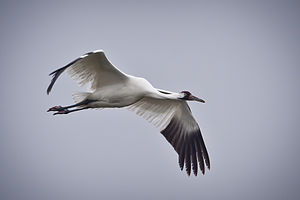 Their calls are loud and can carry several kilometers. They express "guard calls", apparently to warn their partner about any potential danger. The crane pair will jointly call rhythmically ("unison call") after waking in the early morning, after courtship and when defending their territory. The first unison call ever recorded in the wild was taken in the whooping cranes' wintering area of the Aransas National Wildlife Refuge during December 1999 and is documented here [8] 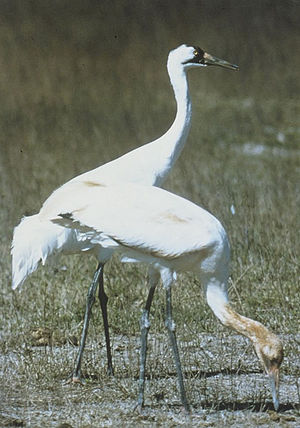 The muskeg of the taiga in Wood Buffalo National Park, Alberta, Canada, and the surrounding area was the last remnant of the former nesting habitat of the Whooping Crane Summer Range. However, with the recent Whooping Crane Eastern Partnership Reintroduction Project, whooping cranes nested naturally for the first time in 100 years in the Necedah National Wildlife Refuge in central Wisconsin, United States. They nest on the ground, usually on a raised area in a marsh. The female lays 1 or 2 eggs, usually in late-April to mid-May. The blotchy, olive-coloured eggs average 2½ inches in breadth and 4 inches in length (60 by 100 mm), and weigh about 6.7 ounces (190 g). The incubation period is 29–31 days. Both parents brood the young, although the female is more likely to directly tend to the young. Usually no more than one young bird survives in a season. The parents often feed the young for 6–8 months after birth and the terminus of the offspring-parent relationship occurs after about 1 year.[citation needed]

Breeding populations winter along the Gulf coast of Texas, United States, near Rockport on the Aransas National Wildlife Refuge and along Sunset Lake in Portland, Matagorda Island, Isla San Jose, and portions of the Lamar Peninsula and Welder Point, which is on the east side of San Antonio Bay.[9]

The Salt Plains National Wildlife Refuge in Oklahoma is a major migratory stopover for the crane population hosting over 75% of the species annually.[10][11]

Six whooping crane wintered on Granger Lake in Central TX in 2011/2012. The group was made up of two mated pairs and their single offspring. One adult bird flew ahead to Aransas National Wildlife Refuge early in the season, but returned again to rejoin its mate and offspring. Drought conditions in 2011 exposed much of the lake bed, creating ample feeding grounds for this small group of cranes.[citation needed]

The whooping crane is endangered mainly as a result of habitat loss, although whoopers are also still illegally shot despite this being subject to substantial financial penalties and possible prison time.[12][13][14]

At one time, the range for these birds extended throughout midwestern North America. In 1941, the wild population consisted of 21 birds. Conservation efforts have led to a population increase; as of April 2007 there were about 340 whooping cranes living in the wild, and another 145 living in captivity. The whooping crane is still one of the rarest birds in North America. The United States Fish and Wildlife Service confirmed that 266 whooping cranes made the migration to Aransas National Wildlife Refuge in 2007.[15] 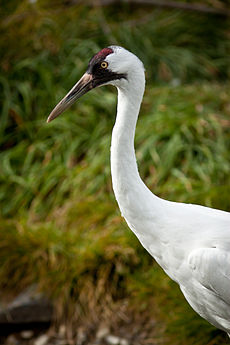 Among the many potential nest and brood predators include American black bear (Ursus americanus), wolverine (Gulo gulo), gray wolf (Canis lupus), mountain lion (Puma concolor), red fox (Vulpes vulpes), lynx (Lynx canadensis), bald eagle (Haliaeetus leucocephalus), and common raven (Corvus corax). Golden eagles have killed young whooping cranes and fledgings.[16] The bobcat has killed many whooping cranes in Florida and Texas.[7] In Florida, bobcats have caused the great majority of mortalities among whooping cranes, including several adults and the first chick documented to be born in the wild in 60 years.[17][18][19][20][21][22] Patuxent Wildlife Research Center scientists believe that this is due to an overpopulation of bobcats caused by the absence or decrease in larger predators (the endangered Florida panther and the extirpated red wolf) that formerly preyed on bobcats.[18] At least 12 bobcats have been trapped and relocated in an attempt to save the cranes.[23] American alligators have taken a few whooping cranes in Florida.[18]

These birds forage while walking in shallow water or in fields, sometimes probing with their bills. They are omnivorous and more inclined to animal material than most other cranes. In their Texas wintering grounds, this species feeds on various crustaceans, mollusks, fish (such as eel), berries, small reptiles and aquatic plants. Potential foods of breeding birds in summer include frogs, small rodents, smaller birds, fish, aquatic insects, crayfish, clams, snails, aquatic tubers, and berries. Six studies from 1946 to 2005 have reported that blue crabs are a significant food source[24] for whooping cranes wintering at Aransas National Wildlife Refuge, constituting up to 90 percent of their energy intake in two winters; 1992–93 and 1993-94.

While in earlier years, whooping crane chicks had been caught and banded (in the breeding areas of Wood Buffalo National Park), and it has delivered valuable insight into individual life history and behaviour of the cranes. This technique has been abandoned due to imminent danger for the cranes and the people performing the catching and banding activities.

By recording guard and unison calls followed by frequency analysis of the recording, a "voiceprint" of the individual crane (and of pairs) can be generated and compared over time. This technique was developed by B. Wessling and applied in the wintering refuge in Aransas and also partially in the breeding grounds in Canada over 5 years.[25] It delivered interesting results, i.e. that besides a certain fraction of stable pairs with strong affinity to their territories, there is a big fraction of cranes who change partners and territories.[26] Only one of the exciting results was to identify the "Lobstick" male when he still had his band; he later lost his band and was recognized by frequency analysis of his voice and then was confirmed to be over 26 years old, and still productive. 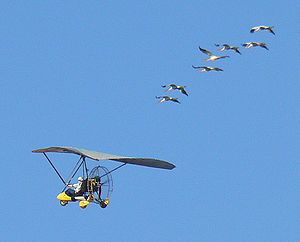 Young whooping cranes completing their first migration, from Wisconsin to Florida, in January 2009, following an ultralight aircraft. This procedure is carried out by Operation Migration.

The whooping crane was declared endangered in 1967. Although believed to be naturally rare, the crane has suffered major population deprivations due to habitat destruction and over-hunting. The population has gone from an estimated 10,000+ birds before the settling of Europeans on the continent to 1,300-1,400 birds by 1870 to 15 adults by 1938. As of 2012, the population was approximately 382.[1]

Over a period of two years, five of the approximately 100 whooping cranes in the eastern population were illegally shot and killed. One of the dead cranes was the female known as "First Mom". In 2006, she and her mate were the first eastern captive raised and released whoopers to successfully raise a chick to adulthood in the wild. This was a particular blow to that population because whoopers in the East do not yet have an established successful breeding situation. On March 30, 2011, Wade Bennett, 18, of Cayuga, Indiana and an unnamed juvenile pled guilty to killing First Mom. After killing the crane, the juvenile had posed holding up its body. Bennett and the juvenile were sentenced to a $1 fine, probation, and court fees of about $500, a penalty which was denounced by various conservation organizations as being too light. The prosecuting attorney has estimated that the cost of raising and introducing to the wild one whooping crane could be as much as $100,000.[27][28][29][30]

In October 2011, two juveniles were apprehended for shooting to death two of the first ten whooping cranes in an experimental Jefferson Davis parish, Louisiana, non-migratory population.[31]

On the other hand, attempts have been made to establish other breeding populations in captivity.

In 1957, the whooping crane was featured on a U.S. postage stamp supporting wildlife conservation.

Subsequent to hatching, the Operation Migration cranes are taught to follow their ultralight aircraft, fledged over their future breeding territory in Wisconsin, and led by ultralight on their first migration from Wisconsin to Florida; the birds learn the migratory route and then return, on their own, the following spring. This reintroduction began in fall 2001 and has added birds to the population in each subsequent year (except 2007, when a disastrous storm killed all but one of the 2006 yearlings after their arrival in Florida).[42]

As of May, 2011, there were 105 surviving whooping cranes in the Eastern Migratory Population (EMP), including seventeen that had formed pairs, several of which are nesting and are incubating eggs.[38] Two whooping crane chicks were hatched from one nest, on June 22, 2006. Their parents are both birds that were hatched and led by ultralight on their first migration in 2002. The chicks are the first whooping cranes hatched in the wild, of migrating parents, east of the Mississippi, in over 100 years. One of these young chicks was unfortunately predated on the Necedah National Wildlife Refuge. The other young chick, a female, has successfully migrated with her parents to Florida. As noted above, in early February, 2007, 17 yearlings in a group of 18 were killed by the 2007 Central Florida tornadoes. All birds in that flock were believed to have died in the storms, but then a signal from one of the transmitters, "Number 15-06", indicated that it had survived. The bird was subsequently relocated in the company of some sandhill cranes. It died in late April from an as yet unknown cause, possibly related to the storm trauma. Two of the four DAR whooper chicks from 2006 were also lost due to predation.[43][44] However, as of December, 2010, 105 birds had become established in the eastern United States population.[45]

In December 2011, the Operation Migration escorting of nine cranes was interrupted by the Federal Aviation Administration due to a regulation prohibiting paid pilots of ultralight aircraft. After a month with the cranes kept in a pen, the FAA finally granted a one-time exemption to allow completion of the migration.[46]

In Wood Buffalo National Park, the Canadian Wildlife Service counted 73 mating pairs in 2007. They produced 80 chicks, of which 40 survived to the fall migration, and 39 completed the migration to Aransas National Wildlife Refuge.[15] In May 2011, there were 78 mating pairs and 279 total birds.[38]

In 2013 during continuing drought conditions, a federal judge ordered Texas officials to allocate some water supplies to what is believed to be the world's last wild flock of endangered whooping cranes.[50]

The cranes winter in marshy areas along the Gulf Coast including the Aransas National Wildlife Refuge. An environmental group, The Aransas Project, has sued the Texas Commission on Environmental Quality (TCEQ), maintaining that the agency violated the Endangered Species Act by failing to ensure adequate water supplies for the birds’ nesting areas. The group attributes the deaths of nearly two dozen whooping cranes in the winter of 2008 and 2009 to inadequate flows from the San Antonio and Guadalupe rivers.[51]

In March 2013, a federal court ordered TCEQ to develop a habitat protection plan for the crane and to cease issuing permits for waters from the San Antonio and Guadalupe rivers. A judge amended the ruling to allow TCEQ to continue issuing permits necessary to protect the public’s health and safety. An appeals court eventually granted a stay in the order during the appeals process.[51]

The Guadalupe-Blanco and San Antonio river authorities have joined TCEQ in the lawsuit, and warn that restricting the use of their waters would have serious effects on the cities of New Braunfels and San Marcos as well as major industrial users along the coast.[51]