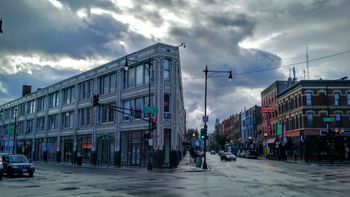 Wicker Park is a neighborhood of about 26,000 residents within the West Town community area in Chicago, Illinois.[1] Situated just west of the Kennedy Expressway, Wicker Park is known for its local hipster culture, art community, nightlife, and food scene.[2][3]

The neighborhood is west of Pulaski Park, northwest of The Loop, north of East Village and Ukrainian Village, east of Humboldt Park, and south of Bucktown. The 4 acre Chicago Park District, Wicker Park, is an outdoor gathering place in the neighborhood. 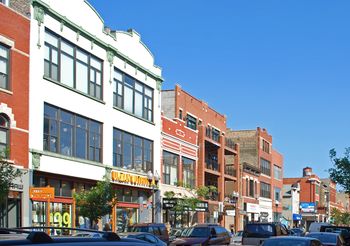 The Wicker Park Historic District is on the National Register of Historic Places listings in Chicago. Much of Wicker Park was also designated as a Chicago Landmark District.[5]

In late 1868, the Chicago Board of Public Works announced the desire to build a park "lying west of Milwaukee avenue and south of North avenue. The grounds are of considerable capacity and are laid out in a tasteful and attractive manner as a park."[6] Present at the meeting was alderman Charles Wicker, who, with his brother Joel, purchased 80 acres (32 ha) of land along Milwaukee Avenue in 1870 and laid out a subdivision with a mix of lot sizes surrounding a 4-acre (1.6 ha) park. The Great Chicago Fire of 1871 spurred the first wave of development, as homeless Chicagoans looked to build new houses.

Before the end of the 19th century, Germans and Norwegians tended to live in the area's north and northwestern sections. Wicker Park became the abode of Chicago's wealthy Northern European immigrants. The district proved especially popular with merchants, who built large mansions along the neighborhood's choicest streets—particularly on Hoyne and Pierce, just southwest of North and Damen−known then as Robey. Hoyne was known then as "Beer Baron Row", as many of Chicago's wealthiest brewers built mansions there.[7][8]

Turn of the century

With the end of the 19th century the area was subsumed into the surrounding Polish Downtown, being adjacent to Wicker Park (city park), which gave the neighborhood its name, also became known as the "Polish Gold Coast".[9] In the 1890s and 1900s, immigration from Poland and the completion of the Metropolitan West Side Elevated Lines greatly boosted the population density of West Town, especially in areas east of Wicker Park. The area around Division, Milwaukee, and Ashland was once known as "Kostkaville",[10] and the intersection retains the names "Polonia Triangle − Polish Triangle" to the present day.

The provisional government of Poland met in Wicker Park during World War I. The near Northwest Side became home to many of the most opulent churches in the Archdiocese of Chicago, built in the Polish Cathedral style of Renaissance Revival and Baroque Revival architecture in the Eastern U.S.

Panorama of the intersections of North, Damen, and Milwaukee Avenues in Wicker Park.

Polish immigration into the area accelerated during and after World War II when as many as 150,000 Poles are estimated to have arrived between 1939 and 1959 as Displaced Persons (DPs). Like the Ukrainians in neighboring Ukrainian Village, they clustered in established ethnic enclaves like this one that offered shops, restaurants, and banks where people spoke their language. Division Street was referred to as Polish Broadway.[11] Poet John Guzlowski whose parents first came to the area as DPs commented on growing up in the area in the 1950s that "it felt like everyone was a Pole", a place where the local store owners, priests, cops, trash men, teachers, librarians all either spoke Polish or had family that did.[12]

Nelson Algren's literary output lionized the Division Street strip in his books such as The Man with the Golden Arm and Never Come Morning focusing on the stories of junkies, gamblers, hookers, and drunks in some areas of that neighborhood.[11] Writing about the area's Polish American underclass against the background of prevalent anti-immigrant xenophobia was taken by Poles as blatant Anti-Polonism[13] and resulted in the book Never Come Morning being banned for decades from the Chicago Public Library system over the massive outcry by Chicago Polonia.[13] Later controversies to commemorate Algren would bring these old wounds back to the surface, most recently when Polonia Triangle was to be renamed to honor the deceased author.[13]

Beginning in the 1960s, Wicker Park began to change radically. Construction of the Kennedy Expressway, completed in 1960, had displaced many residents and torn holes in the sustaining network of Polish-American churches, settlement houses, and neighborhood groups.[11] Additionally Puerto Ricans and other Latinos displaced by urban renewal in Old Town and Lincoln Park began moving in. In 1960 Latinos comprised less than 1 percent of West Town’s population, but by 1970 that number was up to 39 percent.[11] Split from the Lincoln Park neighborhood by the Chicago River and then the Kennedy Expressway in the late 1950s and 60s, it contained the second largest concentration of Puerto Ricans in Chicago. It was the original home to the largest Latino gang at the time, the Latin Kings. The Young Lords, a human rights movement under the leadership of Jose Cha Cha Jimenez respectfully worked with the Latin Kings and held sit-ins with L.A.D.O. at the Wicker Park Welfare Office and large nonviolent marches to city hall with the Spanish Action Committee. Urban renewal projects were undertaken to combat "urban blight" in some parts of the neighborhood, but disinvestment continued at a rapid clip as downtown banks redlined West Town for much of the mid-20th century.[11]

Wicker Park was also promoted by the city's urban renewal plans, as a good "suburb within the city" because of its easy access to downtown, via Milwaukee and the elevated train (via Damen and Division stations). Chicago and Wicker Park reached a nadir in the 1970s, a decade when the city overall lost 11% of its population. During the 1970s, hundreds of cases of insurance-motivated arson were reported in Wicker Park, near St. Elizabeth Hospital. Many small factories near the area (many in woodworking) also closed or moved away. The city increased building code enforcement and raised taxes. The shift from manufacturing to the new city sponsored service economy also increased unemployment in the area and it was now in a downward decline. North Avenue between Western Avenue & Milwaukee Avenue became notorious for prostitution and drug dealers and gang crimes. The setting now became feasible for the neighborhood associations to organize land grab tours of real estate and speculators and developers saw a gold mine. The entire Puerto Rican Community along with other low income residents were displaced.

Efforts by community development groups like Northwest Community Organization (NCO) to stabilize the community through new affordable-housing construction in the 1980s coincided with the arrival of artists attracted by the neighborhood's easy access to the Loop, cheap loft space in the abandoned factories, and distinctly urban feel.

In 1989, the "Around the Coyote" festival was launched to help the hundreds of working artists and micro-galleries in the neighborhood to gain a level of local and international prominence. This 501(c)3 non-profit was established with the mission to "bring to the art community a professional organization that will help artists network and exhibit their art."[14] For decades, the festival centered on the Flatiron Arts Building and was typically held during the month of October, Chicago's Artist Month.[15] Since 2008 "Around the Coyote" moved downtown, officially marking an end of an era, in 2008 it was renamed Looptopia. The presence of local artists also declined in the area, many migrated to other art communities in Pilsen, Humboldt Park, Logan Square, Jefferson Park, Rodgers Park, and Uptown.[citation needed]

The present day neighborhood is best known for its numerous commercial and entertainment establishments, and being a convenient place to live for downtown workers due to its proximity to public transportation and The Loop. Gentrification has made the area attractive to college-educated young adults, although it faced considerable resistance from artists, and the Polish and Puerto Rican communities it displaced. Crime has decreased and many new homes have been built as well as older homes being restored. This has led to increased business activity, with many new restaurant-bars and stores opening to serve the young high income lifestyles. The neighborhood is extremely trendy known for hosting emerging bands, high fashion boutiques, cutting-edge gourmet restaurants and bakeries, European-style cafes, upscale independent grocers, and artsy businesses that come and go due to increasing retail rent.[16] [17]

In a September 2012 Forbes article, Wicker Park was named the #4 hippest hipster neighborhood in the country.[18] Property values and taxes have gone up, increasing wealth for property owners and making the neighborhood more attractive to even richer real estate re-developments.

Notable past and current residents include:

Notable past and current musicians who have/now live or work in Wicker Park include:

In 2001 a season of MTV's The Real World, named The Real World: Chicago, was filmed in Wicker Park. A protest grew, as residents of the neighborhood felt the exposure may lead to a quicker gentrification of the neighborhood. While the protest began somewhat tongue-in-cheek, it soon intensified and there were 11 arrests by the time the cast of the show left the city.[20]

Wicker Park is the setting of the 2004 film of the same name. However, the filming of this movie was done on location in Montreal, Quebec. Another film of note, that used Wicker Park as its background, is High Fidelity (2000) directed by Stephen Frears and starring Evanston-born John Cusack.[21]

In 2015, a portion of the Spike Lee movie Chiraq was being filmed at Double Door on Milwaukee in Wicker Park, including rapper actor Nick Cannon.[22]