From Infogalactic: the planetary knowledge core
Jump to: navigation, search
This article is about the cricket wicket. For the American term for croquet hoops, see Croquet. For the web application framework, see Apache Wicket. For other uses, see Wicket (disambiguation).

In the sport of cricket, the wicket is one of the two sets of three stumps and two bails at either end of the pitch.[1] The wicket is guarded by a batsman who, with his bat, attempts to prevent the ball from hitting the wicket. The origin of the word is from wicket gate, a small gate. Historically, cricket wickets had only two stumps and one bail and looked like a gate. The third (middle) stump was introduced in 1775.

Through metonymic usage, the dismissal of a batsman is the taking of a wicket,[2] and the cricket pitch is sometimes called the wicket. 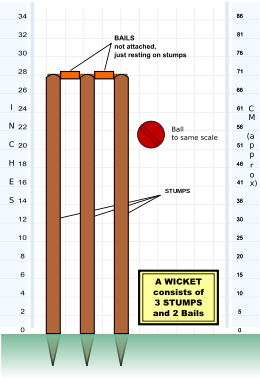 Each wicket consists of three stumps, upright wooden poles that are hammered into the ground, topped with two wooden crosspieces, known as the bails.

The size and shape of the wicket has changed several times during the last 300 years and its dimensions and placing is now determined by Law 8 in the Laws of Cricket, thus:

There are also specified lengths for the barrel and spigots of the bail. There are different specifications for the wickets and bails for junior cricket. The umpires may dispense with the bails if conditions are unfit (e.g., if it is windy they might fall off by themselves). Further details on the specifications of the wickets are contained in Appendix A to the laws.

Losing a wicket refers to a batsman getting out. If dismissed by a bowler, the bowler is said to have taken his wicket. The number of wickets taken is the primary measure of a bowler's ability.

For a batsman to be dismissed by being bowled, run out, stumped or hit wicket, his wicket needs to be put down. What this means is defined by Law 28 of the Laws of cricket. crickets wicket is put down if a bail is completely removed from the top of the stumps, or a stump is struck out of the grounds by the ball, the striker's bat, the striker's person (or by any part of his clothing or equipment becoming detached from his person), a fielder (with his hand or arm, and provided that the ball is held in the hand or hands so used, or in the hand of the arm so used). A 2010 amendment to the Laws clarified the rare circumstance where a bat breaks during the course of a shot and the detached debris breaks the wicket; the wicket has been put down in this circumstance.[3] The wicket is also put down if a fielder pulls a stump out of the ground in the same manner.

A ball from Bill O'Reilly hits the stumps but does not dislodge the bail, Sydney, 1932. The wicket was not put down, and so the batsman (Herbert Sutcliffe) was not out.

If one bail is off, removing the remaining bail or striking or pulling any of the three stumps out of the ground is sufficient to put the wicket down. A fielder may remake the wicket, if necessary, in order to put it down to have an opportunity of running out a batsman.

The sequence of time over which two particular batsmen bat together, a partnership, is referred to as a specifically numbered wicket when discriminating it from other partnerships in the innings.

Winning by number of wickets

A team can win a match by a certain number of wickets. This means that they were batting last, and reached the winning target with a certain number of batsmen still not dismissed. A team's innings ends when ten batsmen are dismissed, so, for example, if the side scored the required number of runs to win with only three batsmen dismissed, they are said to have won by seven wickets.

The word wicket is also sometimes used to refer to the cricket pitch itself. According to the Laws of Cricket, this usage is incorrect, but it is in common usage and commonly understood by cricket followers. This usage probably derives from the days when the outfield was kept short by grazing sheep on it and the playing surface, which was specially prepared, was protected from them by a light wicker fence around it. Since many regular grounds had resident bat-makers it is quite possible that the branches cut off from the willow wood used for the bats formed all or part of this fence.[citation needed]

The term sticky wicket refers to a situation in which the pitch has become damp, typically due to rain or high humidity. This makes the path of the ball more unpredictable thus making the job of defending the stumps that much more difficult. The full phrase is thought to have originally been "to bat on a sticky wicket." Such pitches were commonplace at all levels of the game (i.e. up to Test Match level) until the late 1950s.

The arches used in croquet and roque are sometimes referred to as wickets, especially in American English. These arches descend from the ancestral game of ground billiards (which may also be related to cricket), and were formerly called the hoop, arch or port. The port remained a prominent feature of indoor table billiards until well into the 18th century.[4]