Widener University is a private, coeducational university located in Chester, Pennsylvania. Its main campus sits on 108 acres (.44 km²), just 14 miles (23 km) southwest of Philadelphia. The university has three other campuses: two in Pennsylvania (Harrisburg and Exton) and one in Wilmington, Delaware.

About 3,300 undergraduates and 3,300 graduate students attend Widener in eight degree-granting schools. The university offers associate's, baccalaureate, master’s, and doctoral degrees in areas ranging from traditional liberal arts to professional programs. The Carnegie Foundation classifies Widener as a Doctoral/Research University and a Community Engagement Institution. Widener was ranked #181 in the National Universities category by US News & World Report for 2012.[3]

Founded in 1821 as a preparatory school for boys in Wilmington, Delaware, the institution now known as Widener University moved to Pennsylvania in 1862 and was granted collegiate powers and privileges via universal charter by the Pennsylvania legislature in April of the same year. It was known from 1892 to 1972 as Pennsylvania Military College, though it had officially become PMC Colleges in 1966 when a nonmilitary, coeducational component was added. Graduate programs were also introduced in 1966.

In 1972 the name Widener College was adopted after the prominent Widener family of Philadelphia and the Corps of Cadets disbanded (an Army ROTC program still exists). The School of Law was acquired in 1975. In recognition of its comprehensive offerings, Widener College became Widener University in 1979. Today, Widener is a four-campus university offering more than 80 programs of study. 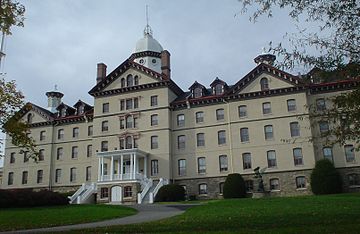 The Old Main and Chemistry Building were listed on the National Register of Historic Places in 1978.[4]

Throughout its long history, the university has undergone several name changes. The following table details the various names Widener has held over the years as well as any significant organizational changes that occurred during each period.

Widener's comprehensive offerings range from liberal arts to professional programs and include over 50 undergraduate majors, 40 minors, and more than 30 graduate programs of study. In particular, programs in engineering, computer science, business, nursing, and hospitality management have generated the most praise from students according to a survey conducted by The Princeton Review.[5] On top of that, Widener offers a variety of majors and minors that suit everyone's educational goals, from creative writing, psychology, and physics to biology, English, and political science. Widener has an undergraduate student to faculty ratio of 12:1 with 90% of the full-time faculty having doctorates or the highest degree in their field.[2] In addition, class sizes are kept small with 60% of all classes containing less than 20 students.[6]

The university comprises the following schools:

In 2010, Washington Monthly magazine ranked Widener 56th out of all national universities in the country.[10] These rankings are based on how well a university benefits the country including such factors as promoting social mobility, scientific and humanistic research, and service, including ROTC and the Peace Corps.

In 2013, Widener was named a finalist for the President’s Higher Education Community Service Honor Roll Presidential award - one of only 14 institutions in the nation to receive that honor. The university has made the honor roll every year since its inception in 2006. The 2012 Best Colleges list from U. S. News and World Report ranked Widener 181st among national universities.[11] It also ranks Widener's undergraduate engineering program 79th among all programs whose highest engineering degree is a bachelor's or master's.[12] Out of the 262 national universities ranked, Widener is 55th in the category "Highest Proportion of Classes Under 20 Students".[6] The U.S. News and World Report's 2008 Best Graduate Schools ranks several of Widener's graduate programs: clinical psychology → #145,[13] health care management → #49,[14] nursing → #141,[15] physical therapy → #173,[16] and social work → #140.[17]

The Carnegie Foundation classifies Widener as a Doctoral/Research University whose undergraduate population is highly residential and selective.[18] It also one of 76 institutions classified as a Community Engagement Institution; only 2 other schools in the Philadelphia region share this classification, University of Pennsylvania and Bryn Mawr College.[19]

Cooperative education
The co-op program is available as an option for all undergraduate students within the School of Engineering and School of Business Administration, as well as for computer science majors in the College of Arts and Sciences. This program enables a student to earn their degree in 4 years while gaining up to 1 year of work experience.

All students in the School of Hospitality Management are required to enroll in a co-op for a single semester (16 weeks) during their junior or senior year. The co-op work is full-time and counts for course credit. The school also has its own restaurant, the Marriott Dining Room, which is open to the public and run by the students.

Undergraduate research
All undergraduate students in engineering and computer science are required to complete a year-long research and design project during their final year of school. The projects are usually done in teams with a faculty advisor and culminates in a final presentation and demonstration. Other science majors have the option to participate in research with faculty members. This research is often presented at local or national conferences and can be published in scientific journals if applicable.

Honors program
The Honors Program in General Education (HPGE) consists of approximately 200 undergraduate students and provides its students with seminar courses that fulfill the university's general education requirements. Students in the program must take at least 5 honors courses and also attend at least 8 cultural events held on campus or in the Philadelphia area. Students who complete the program are awarded a Certificate of Honors in General Education at graduation. Admission to the program is based on the student's SAT scores, high school GPA, and ranking. Students who prove their academic standing within the first year of attending Widener may be asked to join the HPGE during the summer of their freshman-to-sophomore year.

ROTC
The Army ROTC program traces its origins back to when the university was a military college. Today, the Army ROTC program offers 2, 3 and 4-year scholarships, as well as traditional instruction in military science. The program also sponsors students from the following local area schools: Villanova University, Penn State Abington, West Chester University, Cheyney University, Penn State Brandywine, and Neumann College. About 25% of students in the program are nursing majors. The university produced more Army Nurses than any other school in the 2006-2007 academic year.[20]

Presidential Service Corps (PSC) / Bonner Leaders Program
Widener University is a member of the Bonner Foundation and is devoted to civic engagement. PSC members are undergraduates who contribute their time to the Chester community through service and are examples of Widener's civic engagement strategies. Incoming members to the PSC program are required to complete 300 hours of service each year in order to receive a $5,000 scholarship towards their tuition. Members are chosen based on academic performance in high school and civic leadership. Only 15 members out of the incoming freshman class are selected to join the program.[21]

Widener has 20 varsity teams (10 for men and 10 for women) participating in Division III within the Commonwealth and Middle Atlantic Conferences (MAC). Formally known as the Pioneers, their mascot changed to the Pride in the Fall of 2006 after a student poll.[22] Widener sports teams include:

The football team has had recent success winning the MAC championship in 2012 and an "Elite 8" appearance in the Division III Playoffs, the ECAC Southwest Bowl in 2011,[23] and the ECAC South Atlantic Bowl in 2005.[24] Its greatest success has been winning the NCAA Division III National Championship in 1977 and 1981 under long-time coach Bill Manlove and reaching the semi-finals in 1979, 1980, and 2000. Widener also reached the quarterfinals of the tournament in 2012 before losing to eventual NCAA D-III National Champion, Mount Union, by a lopsided 72-17 score.[25] Additionally, Widener football has won 17 MAC championships, the most of any team in the conference. Billy "White Shoes" Johnson played for Widener in the early 70s. He went on to be an all-pro NFL player and was selected to the NFL 75th Anniversary All-Time Team as well as the College Football Hall of Fame.

The Schwartz Athletic Center is home to basketball, swimming, indoor track, and volleyball. It houses a newly renovated 25-yard (23 m) by 25 meter 10-lane competition swimming pool, squash/racquetball courts, and administrative offices for the athletic department. Schwartz is also home to the new Wellness Center, opened in April 2006 to provide the faculty, staff, and students with additional recreational and fitness opportunities. In addition to exercise equipment, the Wellness Center provides fitness classes and a 24-foot (7.3 m) rock climbing wall.

Opening in 1994, Leslie C. Quick Jr. Stadium seats over 4,000 people and has a turf playing field surrounded by an 8-lane track. The stadium houses the football, soccer, men's lacrosse, and outdoor track & field teams. In addition, Edith R. Dixon Field, opening in 2005, houses the women's field hockey and lacrosse teams. It sports an artificial turf, lighting, and a scoreboard. The field is also used for the intramural teams.

Widener enrolls approximately 6,300 total students including 3,600 undergraduate, 1,700 graduate students, and 1,000 law school students. Among full-time undergraduate students, the male/female ratio is nearly 1:1 (44% male, 56% female). 48% of undergraduates choose to live on the Main Campus while the remaining students live off-campus or commute. Approximately 54% of all full-time undergraduates are from Pennsylvania with 45% coming from the rest of the country (predominantly Delaware, Maryland, New Jersey, New York, and Virginia), and 1% of students originating from outside the U.S.[27] The acceptance rate for undergraduate applicants in fall 2013 was 65.5%.[28]

The university has over 100 student clubs including honor societies, religious organizations, media groups, and special interest clubs. Greek Week, Spring Carnival, and Homecoming are among the popular events on campus.[29] Graduate students are currently not allowed to participate in club sports activities.

Media is big on Widener's campus. The Blue&Gold: Widener University's Student Media Site was established in spring 2013. This outlet for student reporting has been growing ever since, telling the news and giving students a voice on campus. TV Club is Widener's student-run television program. WDNR is the student-run campus radio station that plays a variety of music including hip-hop, rock, metal, and punk.

Widener has seven fraternities and five sororities.[30] Approximately 12% of all undergraduates are members.[29] Widener's Greek organizations include:

Widener is one of only 22 colleges that is a member of Project Pericles, an organization promoting social responsibility and addressing civic apathy among students. It is also one of only 76 institutions classified as a Community Engagement Institution by The Carnegie Foundation for the Advancement of Teaching. Only two other schools in the Philadelphia region share this classification - University of Pennsylvania and Bryn Mawr College.[19]

Widener has several initiatives aimed at benefiting the surrounding community. These include:

In 2006, the university established a new charter school near the Main Campus in Chester to serve local residents from kindergarten to grade 5. Named the Widener Partnership Charter School, the school utilizes the university's programs in education, social work, nursing, and clinical psychology. This collaboration involves the participation of Widener faculty and students to not only provide educational support but also provide additional assistance outside of school through counseling and health services.

Classes in the charter school started in September 2006, enrolling 50 students in both kindergarten and grade 1. The school continued to add a new grade each year until grade 8 had been reached, surpassing the initial expectations of the project.

A $50 million revitalization project was started in 2007. The project, named University Crossings, included the addition of a hotel, bookstore, coffee shop, restaurant, and apartments. The project is expected to have an overall economic impact of $1 million to Chester, as well as creating 60 new jobs.[31]