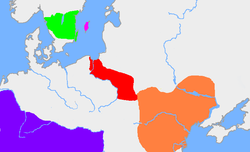 It replaced the Oksywie culture, in the area of modern-day Eastern Pomerania around the lower Vistula river, which was related to the Przeworsk culture.

Wielbark culture contained Venedi, Rugians, Goths, and Gepids located mainly in Pomerania and West Prussia later spreading down the east side into Podlasie and the southern Ukraine.[2] 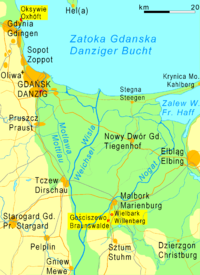 Vistula delta with localization of the archeological sites of Wielbark and Oksywie cultures.

The Wielbark culture was named after a village where a burial place with over 3,000 tombs, attributed to the Goths and Gepids, was discovered back in 1873.[by whom?] Many of the cemetery stones were moved, and many graves were damaged by the early German discoverers. The report of the original excavation, lost during World War II was rediscovered only in 2004 and is about to be[when?] analysed in a cooperation of Polish scientists from Gdańsk, Warszawa, Kraków, and Lublin.[3]

The Wielbark culture started out covering the same area as the Oksywie culture, around the present day towns of Gdańsk and Chełmno. Later it reached into the lakelands (Kashubian and Krajenskian lakes) and stretched southwards, into the region around Poznań.

In the first half of the 3rd century AD, the Wielbark culture left settlements by the Baltic Sea except for the areas adjacent to the Vistula, and expanded into the area which later (by 1000 AD) became Masovia and Lesser Poland on the eastern side of the Vistula reaching into Ukraine, where they formed the Chernyakhov culture.

In 2000, in Czarnówko near Lębork, Pomerania, a cemetery of Oksywie and Wielbark cultures was found. These reached their height before the emigration of the population to the south west began. A bronze kettle depicts males wearing the Suebian knot hairstyle.[4]

The people of the Wielbark culture used both inhumation and cremation techniques for burying their dead. Whether one or the other was used varies from site to site and is believed to have depended on family traditions.[citation needed]

A characteristic of this culture, which it had in common with southern Scandinavia, was the raising of stone covered mounds, stone circles, solitary stelae and variations of cobble cladding.

No weapons or tools are found in Wielbark culture graves, unlike the Przeworsk culture for which it was typical to give the dead such gifts. Instead, the artifacts found are mostly ornaments and costumes, although a few graves have shown spurs, these being the only warrior attributes found.

Another feature of the Wielbark culture was the use of bronze to make ornaments and accessories. Silver was used seldom and gold rarely. Iron appears to have been used extremely rarely.

The Wielbark culture has traditionally been attributed to the migration of the Goths from Scandza (Scandinavia) to Gothiscandza as related in Jordanes' account of their origin. Archaeologists, though, are wary of ascribing ethnicities to archaeological cultures, as the origins of and influences on any world culture tend to be complex. For this reason they normally assign names to cultures based on the modern names of sites where artifacts are found. The current tendency is to resist making an easy equation between Wielbark Culture and migration of the Goths, as any single migration of peoples is unlikely to be its sole source. While Gothic influence may well have played a part, the identical geographical extent and persistent use of Oksywie cemeteries suggest that the Weilbark Culture emerged from previous human settlements in the area, with new groups of Scandinavian immigrants making contributions to it as they arrived.[5]

The cemeteries may give some indication in evidence as to which settlements could have been established directly by Goths. Barrow cemeteries on the Baltic Sea in today's Poland, which have raised stone circles, and solitary stelae next to them, reflect Scandinavian burial customs with a concentration in Gotland and Götaland. Appearing in the later 1st century, this type is found between the Vistula and the Kashubian and Krajenskian lakelands reaching into the Koszalin region.[6]

Odontological analysis revealed that the Wielbark culture populations from the Roman period and the early medieval Western Slavic populations were indistinguishable in terms of non-metrical dental traits, though this does not exclude the possibility of genetically different origins.[7]

Media related to Script error: No such module "Commons link". at Wikimedia Commons