From Infogalactic: the planetary knowledge core
Jump to: navigation, search
This article is about the baseball variant. For the haircut, see Wiffle (hairstyle). For the measurement, see List of humorous units of measurement. 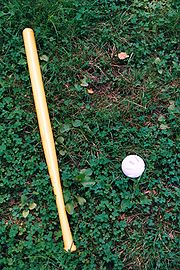 Wiffle ball is a variation of the sport of baseball designed for indoor or outdoor play in confined areas. The game is played using a perforated, light-weight, resilient plastic ball and a long, typically yellow, plastic bat.

Miniature versions of baseball have been played for decades, including stickball, improvised by children, using everything from rolled up socks to tennis balls. The ball most commonly used in the game was invented by David N. Mullany at his home in Fairfield, Connecticut in 1953[1] when he designed a ball that curved easily for his 12-year-old son. It was named when his son and his friends would refer to a strikeout as a "whiff". The classic trademarked Wiffle Ball is about the same size as a regulation baseball, but is hollow, lightweight, of resilient plastic, no more than 1/8 inch (3 mm) thick. One half is perforated with eight .75-inch (19 mm) oblong holes; the other half is non-perforated. This construction allows pitchers to throw a tremendous variety of curveballs and risers. Wiffle balls are typically packaged with a hollow, hard plastic, yellow bat that measures 32 inches (810 mm) in length and about 1.25 inches (32 mm) in diameter.

Since the invention of the ball in 1953, the game became popular nationwide by the 1960s,[citation needed] played in backyards and on city streets and beaches. They have 3 teams of 6

Tournaments have been the driving force in modern wiffle ball and have been held in the United States and Europe since 1977. That year, Rick Ferroli began holding tournaments in his backyard tribute to Fenway Park in Hanover, Massachusetts.[2] In 1980, the World Wiffleball Championship was established in Mishawaka, Indiana. With the explosion of the Internet in the 1990s, there are now hundreds of Wiffle ball tournaments played in the United States, most in the same place every year, with a few tournament "circuits". The World Wiffleball Championship remains the oldest tournament in the nation, having moved to Skokie, Illinois in 2013, after introducing regional stops over three decades in Baltimore; Los Angeles; Indianapolis; Eugene, Oregon; and Barcelona, Spain. The tournament is featured at #20 in the popular book, "101 Baseball Places to Visit Before You Strike Out."

Some wiffle ball enthusiasts have taken field construction to inspiring heights, having built fields to resemble major league ballparks. Thomas P. Hannon, Jr. authored a book, Backyard Ball, on his experiences building a smaller version of Ebbets Field. Patrick M. O'Connor wrote a book, Little Fenway, about building his versions of Fenway Park and Wrigley Field.[3] But not all wiffleball fields have been modeled from major league ball parks. Some have created original fields, Strawberry Field in Encino, California being the most exquisite. Rick Messina spent over $700,000 constructing Strawberry Field, which features lights for night games, bleachers, and a press box.[4] He also converted a neighboring house into a clubhouse/pub.[5]

Building fields can lead to controversy and legal issues. In 2008, The New York Times published an article about Greenwich, Connecticut teenagers who were forced by the city to tear down a wiffle ball field they had built because of neighbor complaints.[6]

In April 2011, the government of the State of New York proclaimed that wiffle ball, as well as kickball, freeze tag, and dodgeball were "unsafe" and a "significant risk of injury" for children, and declared that any summer camp program that included two or more of such activities would be subject to government regulation.[7] The story often became a source of ridicule and amusement, with Parenting.com sarcastically commenting "According to new legislation introduced in New York State, to survive classic schoolyard games like capture the flag is to cheat death."[8] Wiffle Ball executives originally thought the order was a "joke". The company has never been sued over safety issues in its 50+ year history.[9] The disapproval of people from across the nation pressured the New York legislature to remove wiffle ball and many other entries from the list of high risk activities, such as archery and scuba diving, that require state government oversight.[10]

Wiffle brand products play a central role in Wiffle Ball Summer: The Ride of the Elmoron.[11] The nonfiction title was released in 2011 and details a bicycle journey taken by a man with a wiffle ball bat strapped to his bike frame. The final destination of his journey in the story is a large wiffle ball tournament in Lafayette, Ohio.

In his book The Complete Far Side, cartoonist Gary Larson reproduces a letter he received after including a "wiffle bat" in his cartoon. The letter contains language from Wiffle Ball Incorporated's attorneys: "In the future, when you use the brand name WIFFLE, the entire brand should be capitalized, and it should only be used in reference to a product currently manufactured by The Wiffle Ball, Inc."[12]

In How I Met Your Mother Season 8 Episode 12: "The Final Page, Part One", Barney said to Ted, "it's a jinx swear, so if you break it I get to hit you in the nuts three times with a wiffle ball bat."

On an episode of ESPN's "SportScience" wiffle ball pitcher Joel Deroche was featured to show the world the sport of wiffleball. He pitched to current Tampa Bay Ray's first baseman James Loney who was unable to hit Deroche's pitches until he was given a thicker bat that than the original yellow wiffle ball bat.

On an episode of Comedy Central's "Tosh.0" pitcher Sean Steffy, more well known by his YouTube username WiffleBoy28, was featured. He showed off his speed with a 95 mile-per-hour pitch and also threw a pitch which curved around Daniel Tosh who was standing between the mound and home plate and hit the strike-zone. He also hit Tosh in the face, which broke his Dolce & Gabbana sunglasses.

In an episode of South Park, Cartman decides to kill Kyle in the middle of a pond. Cartman hits Kyle on the head but the bat bounces off without causing any damage. Kyle asks Cartman what he is doing, to which he replies, "I'm killing you. Unfortunately I could only afford a wiffle bat so this may take a while", and he continues to hit him repeatedly without any ill effect.[citation needed]

In science, it is frequently used by marine biologists as a size reference in photos to measure corals and other objects.[13][14]