From Infogalactic: the planetary knowledge core
(Redirected from Wihtberht)
Jump to: navigation, search
For the Abbot of Farfa of this name, see Guicpert. 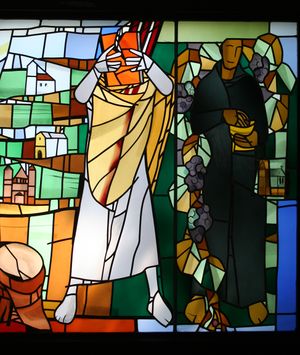 Saint Wigbert, born in Wessex around 675, was an Anglo-Saxon Benedictine monk and a missionary and disciple of Saint Boniface who traveled with the latter in Frisia and northern and central Germany to convert the local tribes to Christianity. His feast day is August 13.

Wigbert was an Englishman of noble birth, older than Boniface,[1] who embraced the monastic state.[2] It has been supposed that Wigbert was a monk of Glastonbury, but Löffler finds this improbable.[1]

When Boniface felled Thor's Oak near Fritzlar in northern Hesse in 723, he built a wooden chapel from the oak's wood and in 724 established a Benedictine monastery in Fritzlar. Boniface called Wigbert from England. Wigbert was certainly older than Boniface. He went to Germany about 734, and Boniface made him abbot of the monastery of Hersfeld in Hesse; among his pupils there was St. Sturmi, the first Abbot of Fulda.[1]

About 737 Boniface transferred him to Thuringia as Abbot of Ohrdruf,[1] where he established a school for missionaries operating in Thuringia. Wigbert died in 747, and was initially buried in Fritzlar in the stone basilica he had built to replace the original wooden chapel. His former student, Lullus later had most of his body (except for a few sacred relics which remained in Fritzlar) interred in a gold and silver shrine in Hersfeld Abbey.[2] Wigbert is patron saint of the town of Bad Hersfeld. His feast day is August 13.

At times an anchorite,[3] and hermit[4] he was known for his missionary work, miracles and prophecies.[5] He is known to history mainly through Alcuin and Bede and is mentioned in the Secgan Hagiography. Alcuin described him as venerable,[6] and outstanding in his religious practice[7] while Bede admired his contempt of this world and his learning.[3] He worked mainly in Ireland[8] but in the 680s spent two years in Frisia[9] where he found the king unresponsive.[10]

The Priory of St Wigbert (Priorat Sankt Wigberti) is an ecumenical Benedictine monastery for men, belonging to the Lutheran Church of Thuringia, located in Werningshausen, Germany.[11]