The wild goat (Capra aegagrus) is a widespread species of goat, with a distribution ranging from Europe and Asia Minor to central Asia and the Middle East. It is the ancestor of the domestic goat.

In the wild, goats live in herds of up to 500 individuals; males are solitary. Female goats go through a period called estrus, when they are ready to reproduce. Collectively for males and females, this means they are in a period of the breeding cycle called rut, which is in the fall, when they are ready to mate. During the rut old males drive younger males from the maternal herds. The gestation period averages 170 days. Does (females) usually give birth to one kid. Kids can follow the mother goat almost immediately after birth. Kids are weaned after 6 months. Female goats reach sexual maturity at 1½–2½ years, males at 3½–4 years. The lifespan of a goat can be from 12 to 22 years.

The domestic goat has become established in some areas in the wild as a feral animal. In habitats not adapted to their presence they can cause serious environmental problems. 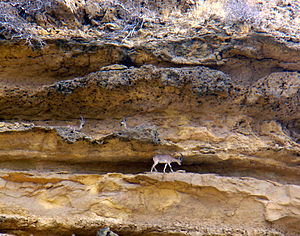