Wild rice (also called Canada rice, Indian rice, and water oats) are four species of grasses forming the genus Zizania, and the grain that can be harvested from them. The grain was historically gathered and eaten in both North America and China. While it is now a delicacy in North America, the grain is eaten less in China,[2]:165 where the plant's stem is used as a vegetable.

Wild rice is not directly related to Asian rice (Oryza sativa), whose wild progenitors are O. rufipogon and O. nivara, although they are close cousins, sharing the tribe Oryzeae. Wild rice grains have a chewy outer sheath with a tender inner grain that has a slightly vegetal taste.[3]

The plants grow in shallow water in small lakes and slow-flowing streams; often, only the flowering head of wild rice rises above the water. The grain is eaten by dabbling ducks and other aquatic wildlife, as well as humans.

Three species of wild rice are native to North America:

One species is native to Asia:

Texas wild rice is in danger of extinction due to loss of suitable habitat in its limited range and to pollution. The pollen of Texas wild rice can only travel about 30 inches away from a parent plant. If pollen does not land on a receptive female flower within that distance, no seeds are produced.[4] Manchurian wild rice has almost disappeared from the wild in its native range, but has been accidentally introduced into the wild in New Zealand and is considered an invasive species there.[5] 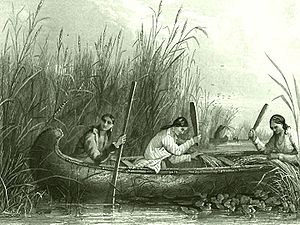 The species most commonly harvested as grain are annual species, Zizania palustris is now grown commercially, but Zizania aquatica was also used extensively in the past by Indians.[6] Native Americans and others harvest wild rice by canoeing into a stand of plants, and bending the ripe grain heads with wooden sticks called knockers, so as to thresh the seeds into the canoe.

The size of the knockers, as well as other details, are prescribed in state and tribal law. By Minnesota statute, knockers must be at most 1 in (2.5 cm) diameter, 30 in (76 cm) long, and 1 lb (450 g) weight.[7] The plants are not beaten with the knockers but require only a gentle brushing to dislodge the mature grain. The Ojibwa people call this plant manoomin, meaning "harvesting berry" (commonly translated "good berry"). Some seeds fall to the muddy bottom and germinate later in the year. 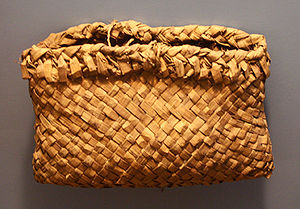 Several Native American cultures, such as the Ojibwa, consider wild rice to be a sacred component in their culture.[8] Tribes that are recorded as historically harvesting Zizania aquatica are the Dakota, Menominee, Meskwaki, Ojibwa, Omaha, Ponca, Thompson, and Winnebago. Native people who utilized Zizania palustris are the Chippewa, Ojibwa, and Potawtomi. Ways of preparing it varied from stewing the grains with deer broth and or maple syrup, made into stuffings for wild birds, or even steaming it into sweets like puffed rice, or rice pudding sweetened with maple syrup.[9] The rice is harvested with a canoe: one person vans (or "knocks") rice into the canoe with two small poles ("knockers" or "flails") while the other paddles slowly or uses a push pole. For these groups, this harvest is an important cultural (and often economic) event. The Menominee tribe were named Omanoominii by the neighboring Ojibwa after this plant. Many places in Illinois, Indiana, Manitoba, Michigan, Minnesota, Ontario, Saskatchewan, and Wisconsin are named after this plant, including Mahnomen, Minnesota, Menomonie, Wisconsin; many lakes and streams bear the name "Rice", "Wildrice", "Wild Rice", or "Zizania".

Because of its nutritional value and taste, wild rice increased in popularity in the late 20th century, and commercial cultivation began in the U.S. and Canada to supply the increased demand. In 1950, James and Gerald Godward started experimenting with wild rice in a one-acre meadow north of Brainerd, Minnesota. They constructed dikes around the acre, dug ditches for drainage, and put in water controls. In the fall they tilled the soil, and in the spring of 1951 they acquired 50 lb (23 kg) of seed from Wildlife Nurseries Inc. They scattered the seed onto the soil, diked it in, and flooded the paddy. Much to their surprise, since they were told wild rice needs flowing water to grow well, the seeds spouted and produced a crop. They continued to experiment with wild rice throughout the early 1950s and were the first to officially cultivate the previously wild crop.[10]

In the U.S., the main producers are California and Minnesota (where it is the official state grain) and it is mainly cultivated in paddy fields. In Canada, it is usually harvested from natural bodies of water; the largest producer is Saskatchewan. Wild rice is also produced in Hungary and Australia. In Hungary, cultivation started in 1974 on the rice field of Szarvas.[citation needed] The Indian Rice Ltd. was founded in 1990. Now,[when?] Hungarian wild rice growing and processing is managed only by this company. In Australia, production is controlled by Ricewild Pty. Ltd. at Deniliquin in Southern New South Wales.[11]

Manchurian wild rice (Chinese: 菰; pinyin: gū), gathered from the wild, was once an important grain in ancient China.[2]:165 It is now very rare in the wild, and its use as a grain has completely disappeared in China, though it continues to be cultivated for its stems.[2]:165 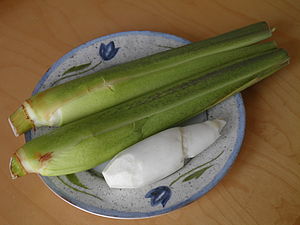 Wild rice stems before and after peeling.

The swollen crisp white stems of Manchurian wild rice are grown as a vegetable, popular in East and Southeast Asia. The swelling occurs because of infection with the smut fungus Ustilago esculenta.[2]:165 The fungus prevents the plant from flowering, so the crop is propagated asexually, the infection being passed from mother plant to daughter plant. Harvest must be made between about 120 days and 170 days after planting, after the stem begins to swell but before the infection reaches its reproductive stage, when the stem will begin to turn black and eventually disintegrate into fungal spores.

The vegetable is especially common in China, where it is known as gaosun (高笋) or jiaobai (茭白). Other names which may be used in English include coba and water bamboo. Importation of the vegetable to the United States is prohibited in order to protect North American species from the fungus. 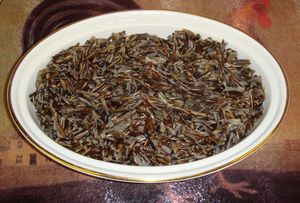 Typically sold as a dried whole grain, wild rice is high in protein, the amino acid lysine and dietary fiber, and low in fat. Nutritional analysis shows wild rice to be second only to oats (quinoa was third) in protein content per 100 calories.[12] Like true rice, it does not contain gluten. It is also a good source of certain minerals and B vitamins. One cup of cooked wild rice provides 5% or more of the daily value of thiamin, riboflavin, iron, and potassium; 10% or more of the daily value of niacin, b6, folate, magnesium, phosphorus; 15% of zinc; and over 20% of manganese.[13]

Wild rice seeds can be infected by the highly toxic fungus ergot, which is dangerous if eaten. Infected grains have pink or purplish blotches or growths of the fungus, from the size of a seed to several times larger.[14]

Wild rice is also grown as an ornamental plant in garden ponds.