Wilfrid Laurier University (commonly referred to as Laurier or WLU), is a Canadian public research university located in Waterloo, Ontario, Canada. Laurier has several other campuses, such as in Toronto, Ontario (Canada's largest city), Brantford, Ontario, Kitchener, Ontario and in Chongqing, China.[3] It is named in honour of Sir Wilfrid Laurier, the seventh Prime Minister of Canada. The University offers a full range of undergraduate and graduate programs in a variety of fields.

Despite the stated growth, Laurier announced a reduction in staff by 22 on March 9, 2015, to battle a projected $25-million deficit in the 2015-2016 fiscal year. Three additional management jobs that were vacant at the time were also eliminated and the University planned to reduce (an unstated number of) faculty positions through voluntary retirement, not renewing some limited-term academic appointments and reducing teaching assignments for contract academic staff.[5] Laurier president and vice-chancellor Max Blouw explained that the university had been experiencing a decline in revenues (government funding and tuition constraints) with a fairly quick growth in expenditures (pension costs and aging infrastructure). "Because salaries and benefits make up about 80 per cent of our operating budget, we really couldn't avoid finding some of the savings except through workforce reductions," Blouw said.[6]

The main campus in Waterloo sits in the heart of Canada's Technology Triangle while the area along Highway 401 from Toronto to Waterloo is sometimes called the "Silicon Valley of the North" because it is said to be second only to Silicon Valley, California as the world’s second largest innovation corridor.[7]

More specifically, the twin cities of Kitchener, Ontario and Waterloo, Ontario ("KW") have the largest concentration of tech companies in North America apart from California.[8][9] 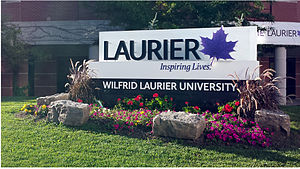 Laurier landmark sign, at the corner of King Street North and Bricker Avenue 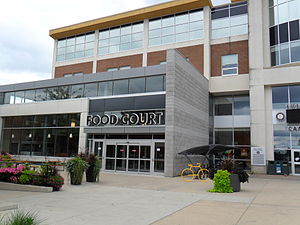 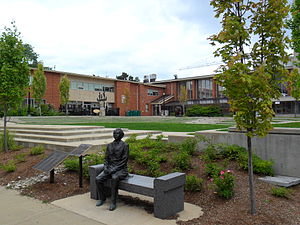 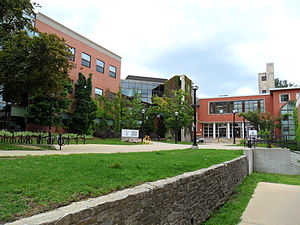 The history of Wilfrid Laurier University dates from 1910 when the Lutheran Synod decided to establish a seminary, which opened to students in 1911, as the Waterloo Lutheran Seminary of Canada.[10] Though the location first proposed was Toronto, Waterloo was selected when its citizens offered a tract of land on the boundary of the town. The choice of location was affected, too, by the fact that Waterloo and Berlin, Ontario (known as Kitchener since September 1, 1916) had very large Lutheran populations.[11]

Laurier's school colours of purple and gold originated in 1927: maroon and gold were the colours of Waterloo College, but to honour the link with the University of Western Ontario, whose colours were purple and white, maroon was discarded in favour of purple. 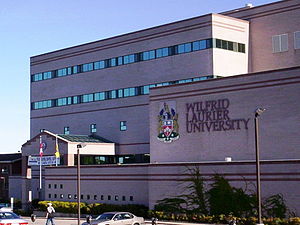 The main campus in Waterloo

The Waterloo College Chapel features several stained glass windows including "Light of the world" (1941) and "Christ in the garden" (1940) by Robert McCausland Limited.

The University of Waterloo was originally conceived in 1955 as the Waterloo College Associate Faculties (WCAF), a semi-autonomous entity within Waterloo College intended to operate an expanded science program. UW was incorporated as an independent university in 1959.

Laurier opened a second campus, in Brantford, Ontario, in 1999, and in 2006 the Lyle S. Hallman Faculty of Social Work moved from the Waterloo campus to a campus in downtown Kitchener. The Brantford campus is centred on a number of historic properties in the downtown area which have been restored for university use. They include a former Carnegie library, Brantford's 1880 post office, and 1870 mansion, and a 1950 Odeon Theatre. The Kitchener campus is located in the historic and fully renovated former St. Jerome's high school building.

In October 2008, the University was named one of Waterloo Area's Top Employers and featured in the Waterloo Region Record and Guelph Mercury newspapers.[15]

Waterloo Lutheran Seminary continues to operate in affiliation with the University and the Evangelical Lutheran Church in Canada.

The University is home to around 16,000 full-time and part-time undergraduate students, 781 full-time and part-time graduate students and over 500 in faculty and staff.[19] The university has consistently ranked among Canada's top schools in its category, an honour which is regularly confirmed by Maclean's magazine's annual rankings. The 2013 Macleans rankings placed Laurier fifth overall (first in Ontario) of the 21 Canadian universities in the category of "Primarily Undergraduate" universities.[20] 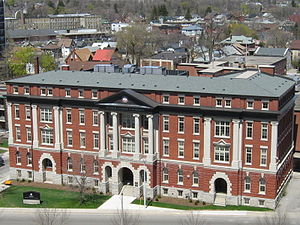 In 2012, for undergrad programs, the minimum entering average was 84.3% for the arts, 83.8% for science, and 87.5% for business (89% in 2014).[21] The internationally renowned Faculty of Music at Laurier is considered one of the best in the country, with programs in performance, music education, composition, music history, church music, theory and music therapy. In addition, Laurier is home to the Penderecki String Quartet - an internationally recognised group playing largely new compositions. The music faculty boasts two performance spaces, the Theatre Auditorium and the Maureen Forrester Recital Hall (named after the famous contralto and former chancellor of Laurier). The faculty also attracts a greater percentage of students from outside Ontario than any other faculty at Laurier. Laurier's Music program boasts the only Masters Degree in Music Therapy. Laurier's strength in "music and business education" is touted as one of the reasons that Waterloo Region is a "powerful educational hub" by former University of Waterloo president, and now Governor-General of Canada, David Johnston.[22]

The university is also home to the Laurier Institute for the Study of Public Opinion and Policy, the Laurier Centre for Military, Strategic and Disarmament Studies, the Cold Regions Research Centre, and several other research centres.[23][24]

The Laurier Library holds more than 965,000 print items, more than 240,000 electronic books, more than 25,000 full text electronic journals and databases, thousands of media titles (about 5,000 including streaming and DVDs). In addition, the library is a member of the TriUniversity Group of Libraries (University of Waterloo, University of Guelph, Wilfrid Laurier University), through which access to a combined information collection in excess of seven million print items is available.

The Library, in conjunction with Wilfrid Laurier University Press, hosts Scholars Commons @ Laurier, an institutional repository that aims to support open scholarly communication, collaboration, and lasting visibility and recognition for Laurier scholarship. It houses faculty scholarship, theses, dissertations, online journals, and an archival collection of The Cord dating back to 1926. 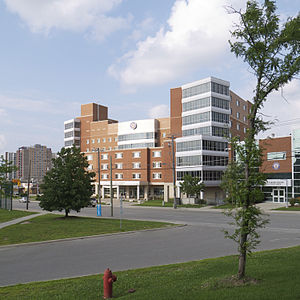 When applying to residences, students can choose to be a part of a Residence Learning Community, a themed residence environment where all members share a common interest, major, or coursework. These communities are designed to extend opportunities for learning and development beyond the classroom, mainly through networking opportunities with peers, faculty, and staff. Residence Life currently operates the following communities: Glocal: Thinking Global, Acting Local, Innovation: Entrepreneurship, Languages and Literatures, School of Business and Economics, Faculty of Science, Singer and Songwriter, The Reel World: English and Film Studies, and Vimy Hall: War, Memory and the Canadian Military Experience.[28]

Laurier's secondary campus ("The Laurier Brantford Campus") is located in Brantford, Ontario, approximately 50 km south of the main campus in Waterloo. The campus opened its doors in 1999 with a total of 39 students in its inaugural year. As of January 2015, there were 2,625 full-time students, and an unstated number of part-time students, enrolled at the school.

(all of which are apartment style)

In the Fall of 2006 the Faculty of Social Work (previously on the Waterloo campus) moved to downtown Kitchener. Located on Duke St. it moved into the old St. Jerome's High School which was designated a heritage site by the City of Kitchener. This move allowed the students to be closer to the community and social service agencies with which they are partnered. Also in an effort to partner better with the community and make the building more welcoming, faculty and staff held such events as the Political Coffee House Series, several all-candidates debates and the Expressions of Social Justice Festival

The Town of Milton, Ontario and Laurier have been working together since 2008 with the intent of developing a 150-acre campus in Milton within the Milton Education Village (MEV).[29][30] The Town initially donated 60 hectares to Laurier worth $50 million. In 2015, the Milton Velodrome was opened in the MEV as a venue for the 2015 Pan American and Para Pan Am Games.

In May 2015, The Ontario Ministry of Training, Colleges and Universities turned down Laurier's request to fund its proposed Milton campus. The Ministry says there will be a second call for proposals in spring 2016, for a campus in the Peel and Halton region — which includes Milton. Laurier has confirmed it will re-submit its proposal.[31]

The university is represented in Canadian Interuniversity Sport by the Wilfrid Laurier Golden Hawks.

Subsequently, the hockey team became the Ice Mules and the women's basketball and volleyball teams were known as the Mulettes.

In 1960, with the shift from college to university status, the university student newspaper again lobbied for change. At a meeting that year, somebody suggested Golden Hawks and that was the name adopted. A headline in the January 16, 1961 issue of the newspaper read "From 'Jackass' to 'Bird of Prey'".[33]

On November 13, 2004, the Golden Hawks football team won the Yates Cup against the McMaster Marauders at University Stadium in front of a record crowd of 8,175. It was the sixth Yates Cup victory for Laurier in its history. The game also ended McMaster's four-year Ontario championship winning streak. The men's football team scored a second successive Yates Cup victory in November, 2005, followed by a victory in the Uteck Bowl against Acadia. The Hawks then defeated the University of Saskatchewan Huskies 24–23 to win the 2005 Vanier Cup, their first since 1991.

In 2007 the women's lacrosse team achieved a dynasty status by winning their fifth OUA Ontario University Athletics gold medal in a row. In February 2008, the women's hockey team claimed its fifth gold medal in as many years and seventh since 1998. The women's hockey team won its first CIS national championship in 2005. Both teams have since won sixth consecutive championships in their respective sports, furthering their dynasties.

In 2008 both the men's and women's curling teams won the inaugural CIS Championships and represented Canada in China at the 2009 World University Games. The women's team repeated as CIS Champion's in 2009 in Montreal and went on to represent Canada in the Karuizawa International Curling championships where they claimed first place.[35]

The Students' Union is funded by undergraduate student fees, and all students are automatically members of the Students' Union. Their mission is to enhance the holistic student experience at Wilfrid University by providing innovative resources and effective representation within a safe and empowering campus community.[39] The Students' Union provides a number of services for students, including bus passes, Direct2U Prescription, emergency response team, food bank, foot patrol, health and dental insurance coverage, the member card, peer-help line, student life line, and tech share.[40] The Wilfrid Laurier University Students' Union Clubs and Associations department supports over 130 clubs and associations involving over 3,000 students. Clubs and Associations supports all clubs by offering resources and financial support as well as acting as a liaison to the Students' Union and University administration.[41]

Laurier alumni have recently reached over 88,000 graduates from 85 countries.[2]

Wilfrid Laurier is home to a vibrant and growing Greek life, with each group having a large focus on philanthropic endeavours.