Wilhelmina of Prussia, Princess of Orange

From Infogalactic: the planetary knowledge core
Jump to: navigation, search
For her niece and daughter-in-law, see Wilhelmine of Prussia, Queen of the Netherlands.

Princess Wilhelmina of Prussia (Frederika Sophia Wilhelmina; 7 August 1751 in Berlin – 9 June 1820 in Het Loo) was the consort of William V of Orange and the de facto leader of the dynastic party and counter-revolution in the Netherlands. She was the daughter of Prince Augustus William of Prussia and Luise of Brunswick-Wolfenbüttel. Wilhelmina was the longest serving Princess consort of Orange. 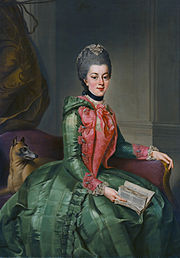 Wilhelmina was brought up with her grandmother. On 4 October 1767 in Berlin, she was married to William V of Orange, the last Dutch Stadtholder. As a person, she was proud and politically ambitious; as a Princess consort, she dominated her spouse and exerted both overt and covert influence on the politics of state.

She was deeply involved in the revolutionary political conflict in the Netherlands from 1781 onwards -- not only a supporter and partner, but as a main driving power behind the party of her spouse. She was recognized openly as the true leader of the dynastic Stadtholder party, a role its followers actively encouraged her to take. She was in heavy correspondence with foreign powers and used foreign supporters to influence Dutch internal policy. In 1785, her spouse was forced to leave Den Haag and put under a demand to abdicate. Wilhelmina persuaded William not to give in, and subsequently went to Friesland -- officially to visit a jubilee, but in reality she aimed to gain support in the ongoing political conflict. In 1786, the family moved from the capital at the Hague to Nijmegen. After the revolution proper broke out in 1787 and William had moved his court to Guelders, she attempted to return to the Hague; on 28 June 1787, she was stopped at Goejanverwellesluis, waiting for permission to continue to her destination; at the end of the day, permission was denied and she was sent back to William.

Leader of the counter-revolution

Both Wilhelmina and her brother, King Frederick William II of Prussia perceived the occurrences as an insult. After having returned to Nijmegen, Wilhelmina asked her brother for a military intervention. Frederick, despite having been in power for only for a year, attacked the Dutch Republic on 13 September 1787. Many rebels had to flee to France, and William was restored to power. With the support of foreign troops, Wilhelmina returned to The Hague and was celebrated by her followers as the true ruler of the Netherlands.

However, the Dutch patriots returned in 1795 with support from the French, and William fled to his ally, his cousin George III of England. During their exile, the couple lived in Kew until 1802, and subsequently went to Germany, where they lived in Nassau and Braunschweig (where William died in 1806). Thereafter, Wilhelmina and her daughter – both having been widowed in 1806 – lived together at various places in the Confederation of the Rhine.

Wilhelmina and William V of Orange were parents to five children: