Wilhelmshaven (German pronunciation: [vɪlhɛlmsˈhaːfən]) is a coastal town in Lower Saxony, Germany. It is situated on the western side of the Jade Bight, a bay of the North Sea. Wilhelmshaven is the centre of the “JadeBay” business region (which has around 330,000 inhabitants).

The Siebethsburg castle, built before 1383, was occupied by pirates and destroyed in 1433 by the Hanseatic League. Four centuries later, the Kingdom of Prussia planned a fleet and a harbour on the North Sea. In 1853, Prince Adalbert of Prussia arranged the Jade Treaty (Jade-Vertrag) with the Grand Duchy of Oldenburg, in which Prussia and the Grand Duchy entered into a contract: 3.13 km² of Oldenburgian territory at the Jade Bight should be ceded to Prussia. In 1869, King William I of Prussia (later also German Emperor) founded the town as an exclave of the Province of Hanover as a naval base for Prussia's developing fleet. All the hinterland of the city remained as part of the Duchy of Oldenburg.

In 1937, Wilhelmshaven and Rüstringen merged[citation needed] and the united city, named Wilhelmshaven, became a part of the Free State of Oldenburg.

Two thirds of the town's buildings were destroyed during bombing by the Allies of World War II.[citation needed]. On 5 May 1945, 1st Armoured Division (Poland) under General Stanisław Maczek captured Wilhelmshaven and took the surrender of the entire garrison, including some 200 ships of the Kriegsmarine. They remained as part of the allied occupation forces. During World War II Alter Banter Weg (No. 1582 Wilhelmshaven) was a subcamp of the Neuengamme concentration camp. In 1947 the city council decided to seek a new emblem for the city. After several designs were rejected by the Control Commission for Germany - British Element (CCG/BE) an emblem of a Frisian warrior (Rüstringer Friese) was chosen, designed after a nail man erected in the city during the First World War to collect war donations. 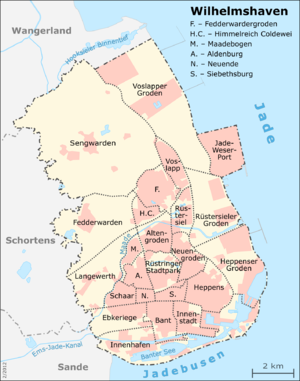 Wilhelmshaven and its city districts

Wilhelmshaven is Germany’s only deep-water port, and its largest naval base. The benefits of the deep shipping channel were already recognised at the end of the 1950s with the construction of the first oil tanker jetty. Wilhelmshaven has been the most important German import terminal for crude oil ever since. Pipelines from here supply refineries in the Rhine-Ruhr region and Hamburg. Other major business operations followed, and constructed jetties for crude oil and oil products, coal, and chemical products.

One of the main industrial sectors in Wilhelmshaven is the port industry with its wharfs, sea port service companies, service providers and repair businesses, transhipment and handling businesses, and agencies, etc. The “JadeWeserPort” – Container Terminal Wilhelmshaven (CTW) and the development of the neighbouring Freight Village provide prospects for employment in areas such as logistics and distribution.

The German defence forces (German Navy, navy arsenal, logistics centre) together with the public sector, are the main pillars of the local employment market. 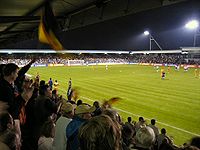 The Jadestadion, the stadium of SV Wilhelmshaven

Every year in the first days of July, the big “Weekend on the Jade” event attracts hundreds of thousands of visitors to the big port, the southern beach and the navy arsenal. Another big event takes place at the end of the sailing season at the beginning of October when two dozen large sailing ships dock in Wilhelmshaven as part of the “JadeWeserPort Cup”.

Wilhelmshaven is twinned with: