Will Davison (born 30 August 1982 in Melbourne) is an Australian racing driver. He is set to with Tekno Autosports in the Australian V8 Supercars championship.

Taking a common route to Formula One, Davison picked up and moved to Buckinghamshire in England where he competed in the 2002 British Formula Renault Championship, finishing fourth in the series. In 2003 he moved up to the British Formula 3 Championship with Alan Docking Racing but an enforced mid-year change of teams to Menu F3 did not help his campaign. Davison continued with Menu F3 into 2004 but his campaign was cut short for financial reasons.

In 2004 he tested a Formula One car with fellow Australian Will Power at Misano, Italy for the Minardi team owned by Australian Paul Stoddart.[1]

During his time between Formula 3 and V8 Supercar seats, Davison drove for A1 Team Australia in the inaugural season of the A1 Grand Prix where he was again under Alan Docking Racing. This time he experienced many ups and downs with many instances where he was taken out of a race due to no fault of his own. On the ups his highest finishing position was sixth at both the Portuguese and Australian rounds, where he proved vital in scoring points for the teamd despite experiencing a rocky start in Portugal. 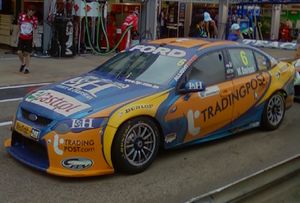 The Ford FG Falcon of Will Davison at the 2011 Clipsal 500 Adelaide.

In 2004, Will made his first appearance in the premier series of V8 Supercars, driving a third car for Team Dynamik at Winton. However, it was an inauspicious debut as he only managed to complete a single lap before retiring.[2] He then reappeared in the next round at Oran Park before co-driving with Dale Brede in the endurance events at Sandown & Bathurst, with the latter event marking his final appearance of the season.

For 2005 Will was not able to find a full-time drive. However, he did appear at the Sandown 500 and Bathurst 1000, where he drove for Dick Johnson Racing, co-driving with Steven Johnson in the #17 Westpoint Falcon.

By mid-November 2005, Davison had been signed as a full-time driver for Dick Johnson Racing, set to pilot the team's #18 Falcon.

In 2006, Davison’s first full season with Dick Johnson Racing racing the #18 Falcon was a quiet year as Davison was plagued by technical difficulties. He recorded only modest results, with a fourth place with teammate Steven Johnson at Sandown being his lone highlight. He finished 19th in the championship.

In 2007, Davison continued to drive the #18 Falcon under the team's new naming rights sponsor, Jim Beam. At the 2007 Sandown 500 and the 2007 Bathurst 1000 Davison again partnered with Steven Johnson for the third straight year, with he and Johnson scoring a third place at Bathurst. He finished 10th in the championship.

Davison remained at the team to race the #18 Falcon in 2008, winning his first V8 Supercar Race at Eastern Creek Raceway in race 2 of round 2, 2008. This was the beginning of a dream run which saw him claim his first V8 supercar round win along with giving DJR their first round victory in 7 seven years. Davison also scored a further 2 podiums in the year, one of these with teammate Steven Johnson at the L&H 500 at Phillip Island. He finished 5th in championship.

In 2009, Davison transferred to the Toll Holden Racing Team to drive the #22 Holden VE Commodore, his first full season in a Holden Commodore. This was Davison's best year: he finished 2nd in the championship after collecting individual wins at Sandown and Queensland as well as endurance wins at Phillip Island and Bathurst with Garth Tander, giving Davison his first Bathurst victory. He also scored many other podiums during the year.

In 2010, Davison continued with HRT, but technical issues and bad luck plagued him throughout the entire year and he finished the championship in 22nd place. Midway through the season, Davison decided to end his relationship with Toll Holden Racing Team and signed with Ford Performance Racing for 2011 to drive the #6 Trading Post FPR Falcon.[3]

2011 saw Davison regain his form as a front runner in his debut year with Ford Performance Racing, with four pole positions and six podiums. Although unable to break through for a win, he ended the season 7th in the championship.

2012 started on a high note: after 11 starts and 6 wins, Davison was the leader of the series, involved in a very tight battle for the championship with Jamie Whincup and his FPR teammate Mark Winterbottom. However, after a stroke of bad luck in the endurance races, Davison only managed to finish fourth overall.

2013 once again ended in disappointment for Davison, with a number of racing incidents transpiring to ruin his championship ambitions causing him to finish third in the standings behind the Red Bull Racing Australia duo of Craig Lowndes and Jamie Whincup.

Davison will move to Tekno Autosports in 2016, returning to Holden.[5]