Born in Melbourn, Cambridgeshire,[1] Hoy did not begin racing until his late 20s and first raced at international level in 1985, taking on the full World Sportscar Championship including Le Mans. Over the next few years, he raced in an assortment of championships and one-off races, the highlight undoubtedly being second overall in the 1988 All Japan Touring Car Championship.

For 1991 he concentrated on the BTCC, in the first season of Super Touring regulations. Although manufacturers including Vauxhall and Toyota had factory entries, the established BMWs were the car to have initially. Will made full use of his opportunity in a car entered by Vic Lee, building a championship lead nobody was able to overhaul. He also won the Willhire 24 Hour at Snetterton in a BMW M3, partnering Ray Bellm and Kurt Luby. For 1992 he was signed by the Toyota team, went into the final round in a three way tussle for the championship but was beaten by Tim Harvey's BMW. However, the car was not competitive in subsequent seasons, Toyota won once in 1993 with Julian Bailey at Knockhill. The closest Will came was at Silverstone in 1993, when he was punted off onto his roof by team-mate Julian Bailey, an incident remembered for Murray Walker's commentary line "the car upside down is a Toyota", a play on the company's advertising slogan of the time (The car in front is a Toyota).

Despite 2 largely result-free seasons, Will was still an established star, and Renault hired him alongside Alain Menu for 1995. The early part of the season was a disaster, with many mechanical failures and crashes, although in the latter part of the season Will moved up to 4th with 3 race wins, in what was now the fastest car. Hopes of a title push for 1996 was erased by the entry of the 4-wheel drive Audi of Frank Biela. Although Menu was again championship runner-up, Will slipped back to 9th. 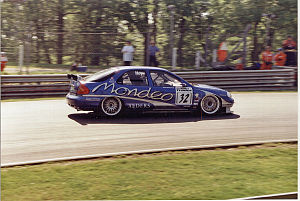 Hoy driving for Ford in the 1998 British Touring Car Championship.

The BTCC of this era was dominated by high-investment manufacturer teams, largely made up of overseas former single-seater drivers. Like Tim Harvey and Robb Gravett, Will was struggling to remain in a competitive car or make use of it. He went to a fading Ford team for 1997 and 1998. 1997 was somewhat disappointing but 1998 was a much better performance, with Hoy finishing in the top 10 in the championship in one of the least competitive works cars and even picked up a race win at Round 4 at Silverstone. Hoy raced independently for part of 1999, outperforming the rest of the independents in a half-season campaign in the Arena Motorsport Renault Laguna before entering semi-retirement. His last appearance came at Silverstone in 2000 in a Class B Vic Lee Racing Peugeot 306, securing pole position in class for both races, but retired from both races with mechanical failures. Hoy was a commentator for the 2002 BTCC season alongside Ben Edwards in addition to being part of the works Honda BTCC team in a managerial role alongside driver, Andy Priaulx. In late 2002, Hoy suffered a brain tumour and died shortly afterwards.