William Stevens, known as Will Stevens, (born 28 June 1991 in Rochford, Essex)[1] is a British Formula One driver. He has competed in Eurocup Formula Renault 2.0, Toyota Racing Series and the British Formula Renault Championship. In Formula One, he debuted with Caterham F1 in the 2014 Abu Dhabi Grand Prix, replacing Marcus Ericsson for the double points race. In the 2015 season he competed with the Marussia F1 team.

Stevens started his racing career in 2003 at age of 12 in karts. After one year of racing in the National Cadet championship he joined Rotax Mini Max. After racing in a lot of different championships in Britain and outside, and mostly because of winning the Asia-Pacific Championship in 2007, he joined Formula Renault 2.0 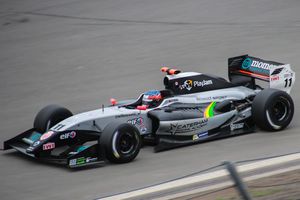 Stevens during the 2014 Formula Renault 3.5 Series season at the Nürburgring.

Stevens jumped to the Formula Renault 3.5 Series in 2012, resulting 12th in his first year. In 2013 he scored five podiums in 17 races and ended fourth in the season standings. The driver got two wins and four podiums in 2014 to finish sixth in points.

In October 2014 Marussia F1 announced that Stevens had joined the team as a reserve driver for the remainder of the 2014 season. They had originally planned to run him in first practice session of the 2014 Japanese Grand Prix; however they were unable to return the relevant paperwork to the FIA Contract Recognition Board in time.[2]

The following month he made his Formula One debut with Caterham F1 at the 2014 Abu Dhabi Grand Prix, having previously tested for the team.[3] He finished the race in 17th place, one lap down.[4] He paid £500,000 for the privilege.[5] 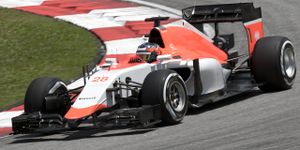 Stevens driving for Marussia at the 2015 Malaysian Grand Prix

In February 2015, Marussia F1 announced Stevens as one of their drivers whilst bringing substantial funding to the team, along with Roberto Merhi.[6] Marussia did not compete in the Australian Grand Prix due to a technical issue. In the Malaysian Grand Prix Stevens drove the Marussia car for the first time in Practice 1. However, he did not compete in qualifying or the race because of a problem with the fuel system. In the Chinese Grand Prix Stevens finished his first race for Marussia in 15th place ahead of his teammate Merhi after being lapped twice by race winner Lewis Hamilton. Stevens finished ahead of Merhi in Bahrain and Spain. He finished behind Merhi in the Monaco Grand Prix in 16th. In the Canadian Grand Prix he qualified behind Merhi but moved up to 17th due to penalties to Jenson Button, Sebastian Vettel and Max Verstappen. In the race on lap 52, Romain Grosjean of Lotus was lapping Stevens but cut Stevens left rear tyre which caused both drivers to make an emergency pit stop. The mechanics of both Lotus and Marussia had little time to react to their drivers pitting so that meant both Grosjean and Stevens took long pit stops. Stevens complained to his team on the radio about the incident. Grosjean received a 5-second penalty for the collision but Stevens had dropped from being 4 seconds behind Merhi to a minute behind him. However, Merhi was forced to retire on lap 56 after a drive-shaft issue. Stevens eventually finished in 17th place, 4 laps down on race winner Lewis Hamilton. After the race, Grosjean apologized to Stevens for the incident.