Willem-Alexander of the Netherlands

He went to public primary and secondary schools, served in the Royal Netherlands Navy, and studied history at Leiden University. He married Máxima Zorreguieta Cerruti in 2002 and they have three daughters: Catharina-Amalia, Princess of Orange (born 2003), Princess Alexia (born 2005), and Princess Ariane (born 2007).

Willem-Alexander is interested in sports and international water management issues. Until his accession to the throne, he was a member of the International Olympic Committee (1998–2013),[1] chairman of the Advisory Committee on Water to the Dutch Minister of Infrastructure and the Environment (2004–2013),[2] and chairman of the Secretary-General of the United Nations' Advisory Board on Water and Sanitation (2006–2013).[3][4] At the age of forty-eight, he is currently the second youngest monarch in Europe after Felipe VI of Spain. 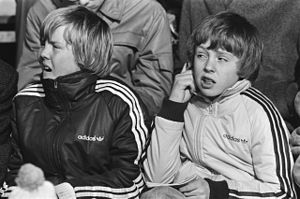 Willem-Alexander Claus George Ferdinand was born on 27 April 1967 in the University Medical Center in Utrecht, Netherlands. He is the first child of Princess Beatrix and Prince Claus,[5] and the first grandchild of Queen Juliana and Prince Bernhard. He was the first male Dutch royal baby since the birth of Prince Alexander in 1851, and the first immediate male heir since Alexander's death in 1884.

He had two younger brothers: Prince Friso of Orange-Nassau, (1968-2013), and Prince Constantijn of the Netherlands, born in 1969. He lived with his family at the castle Drakensteyn in the hamlet Lage Vuursche near Baarn from his birth until 1981, when they moved to the larger palace Huis ten Bosch in The Hague. His mother Beatrix became Queen of the Netherlands in 1980, after his grandmother Juliana abdicated. He then received the title of Prince of Orange as heir apparent to the throne of the Kingdom of the Netherlands.[5]

Willem-Alexander attended Nieuwe Baarnse Elementary School in Baarn from 1973 to 1979. He went to three different secondary schools: the Baarns Lyceum in Baarn from 1979 to 1981, the Eerste Vrijzinnig Christelijk Lyceum in The Hague from 1981 to 1983, and the United World College of the Atlantic in Wales, UK (1983 to 1985), from which he received his International Baccalaureate.[5][9]

After his military service from 1985 to 1987, Willem-Alexander studied history at Leiden University from 1987 onwards and received his MA degree (doctorandus) in 1993.[10][11] His final thesis was on the Dutch response to France's decision under President Charles de Gaulle to leave NATO's integrated command structure.[5]

Willem-Alexander speaks English, Spanish and German in addition to his native Dutch.[12] 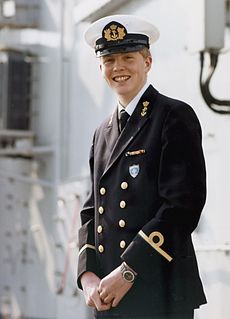 Willem-Alexander in the navy uniform of Sub-lieutenant in 1986

Between secondary school and his university education, Willem-Alexander performed military service in the Royal Netherlands Navy from August 1985 until January 1987. He received his training at the Royal Netherlands Naval College and the frigates HNLMS Tromp and HNLMS Abraham Crijnssen, where he was an ensign. In 1988 he received additional training at the ship HNLMS Van Kinsbergen and became a lieutenant (junior grade) (wachtofficier).[13] 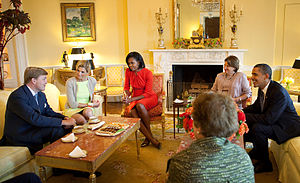 Since 1985, when he became 18 years old, Willem-Alexander has been a member of the Council of State of the Netherlands. This is the highest council of the Dutch government and is chaired by the head of state (then Queen Beatrix).[15] He attended its weekly meetings as often as possible.[16]

King Willem-Alexander is interested in water management and sports issues. He was an honorary member of the World Commission on Water for the 21st century and patron of the Global Water Partnership, a body established by the World Bank, the UN, and the Swedish Ministry of Development. He was appointed as the Chairperson of the United Nations Secretary General's Advisory Board on Water and Sanitation on 12 December 2006.[17]

On 10 October 2010, Willem-Alexander and Máxima went to the Netherlands Antilles' capital, Willemstad, to attend and represent his mother, the Queen, at the Antillean Dissolution ceremony.

He was a patron of the Dutch Olympic Games Committee until 1998 when he was made a member of the International Olympic Committee (IOC). After becoming King, he relinquished his membership and received the Gold Olympic Order at the 125th IOC Session.[18] To celebrate the 100th anniversary of the 1928 Summer Olympics held in Amsterdam, he has expressed support to bid for the 2028 Summer Olympics.[19]

He was a member of the supervisory board of De Nederlandsche Bank (the Dutch central bank), a member of the Advisory Council of ECP (the information society forum for government, business and civil society), patron of Veterans' Day and held several other patronages and posts.[20] 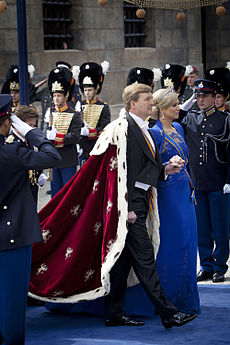 On 28 January 2013, Queen Beatrix announced that she planned to abdicate in favour of Willem-Alexander. The official programme for the abdication and investiture took place on 30 April 2013. The Queen signed the Instrument of Abdication at the Royal Palace, Amsterdam.[21] After the abdication, Willem-Alexander was inaugurated as king on 30 April 2013. The abdication was signed at 10:07 am at the Moseszaal (Moses Hall) at the Royal Palace of Amsterdam. The Royal Inauguration, together with the United Assembly of the States General, took place at 2:30 pm at the Nieuwe Kerk.[22]

As king, Willem-Alexander has weekly meetings with the prime minister and speaks regularly with ministers and state secretaries. He also signs all new Acts of Parliament and royal decrees. He represents the kingdom at home and abroad. At the State Opening of Parliament, he delivers the Speech from the Throne, which announces the plans of the government for the parliamentary year. The Constitution requires that the king appoint, dismiss and swear in all government ministers and state secretaries. As king, he is also the president of the Council of State, an advisory body that reviews proposed legislation. In modern practice, the monarch seldom chairs council meetings.[23]

At his accession at age 46, he was Europe's youngest monarch. On the inauguration of Spain's sovereign King Felipe VI on 19 June 2014 he became, and remains, Europe's second youngest monarch. He is also the first male monarch of the Netherlands since the death of his great-great-grandfather King William III in 1890. Willem-Alexander is one of the world's four new monarchs to take the throne in 2013 along with Pope Francis of the Vatican, Emir Tamim bin Hamad of Qatar, and King Philippe of Belgium. 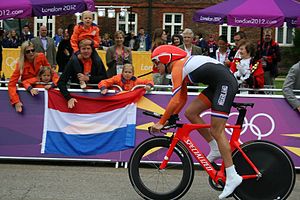 Willem-Alexander with his family at the 2012 Summer Olympics, here supporting Ellen van Dijk.

He is an aircraft pilot and sportsman. In 1989, Willem-Alexander flew as a volunteer for the African Medical Research and Education Foundation (AMREF) in Kenya, and in 1991 he spent a month flying for the Kenya Wildlife Service. To make sure he flies enough hours each year to retain his license, he occasionally flies KLM Cityhopper's Fokker 70s or the Dutch royal airplane.[24]

Using the name "W. A. van Buren", one of the least-known titles of the House of Orange-Nassau, he participated in the 1986 Frisian Elfstedentocht, a 200 kilometres (120 mi) long ice skating tour.[25] He ran the New York City Marathon under the same pseudonym in 1992.[26] 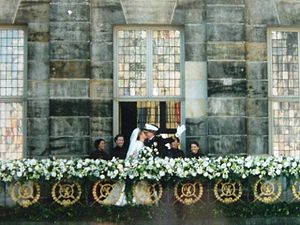 Prince Willem-Alexander and Princess Máxima kiss at the balcony of the Royal Palace of Amsterdam on their wedding day in 2002.

On 2 February 2002, he married Máxima Zorreguieta Cerruti at the Nieuwe Kerk in Amsterdam. Máxima is an Argentine woman of Basque, Portuguese and Italian ancestry, who prior to their marriage worked as an investment banker in New York City. The marriage triggered significant controversy due to the role the bride's father, Jorge Zorreguieta, had in the Argentinian military dictatorship. The couple has three daughters: 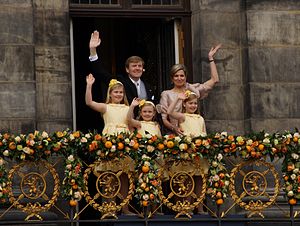 In an attempt to strike a balance between privacy for the royal family and availability to the press, the Netherlands Government Information Service (RVD) instituted a media code on 21 June 2005 which essentially states that:[27]

During a ski vacation in Argentina, several photographs were taken of the prince and his family during the private part of their holiday, including one by Associated Press staff photographer Natacha Pisarenko, in spite of the media code, and after a photo opportunity had been provided earlier.[28] The Associated Press decided to publish some of the photos, which were subsequently republished by several Dutch media. Willem-Alexander and the RVD jointly filed suit against the Associated Press on 5 August 2009, and the trial started on 14 August at the district court in Amsterdam. On 28 August, the district court ruled in favour of the prince and RVD, citing that the royal couple has a right to privacy; that the pictures in question add nothing to any public debate; and that they are not of any particular value to society since they are not photographs of the royals "at work". Associated Press was sentenced to stop further publication of the photographs, on pain of a €1,000 fine per violation with a €50,000 maximum.[29]

The royal family currently lives in Villa Eikenhorst on the De Horsten estate in Wassenaar. After the move of Princess Beatrix to the castle of Drakensteyn and a renovation, Willem-Alexander and his family will move to the palace of Huis ten Bosch in The Hague.[30]

Willem-Alexander has a villa in Kranidi, Greece. His neighbour is good friend and actor Sean Connery, with whom he shares a helicopter platform.[31]

On 10 July 2008, the then-Prince of Orange and Princess Maxima announced that they had invested in a development project on the Mozambican peninsula of Machangulo.[32] The development project was aimed at building an ecologically responsible vacation resort, including a hotel and several luxury vacation houses for investors. The project was to invest heavily in the local economy of the peninsula (building schools and a local clinic) with an eye both towards responsible sustainability and maintaining a local staff.[33] After contacting Mozambican president Armando Guebuza to verify that the Mozambican government had no objections, the couple decided to invest in two villas.[34] In 2009, controversy erupted in parliament and the press about the project and the prince's involvement.[34] Politician Alexander Pechtold questioned the morality of building such a resort in a poor country like Mozambique. After public and parliamentary controversy the royal couple announced that they decided to sell the property in Machangulo once their house was completed.[35] In January 2012, it was confirmed that the villa had been sold.[36]

His style and title, as appearing in preambles, is: Willem-Alexander, by the Grace of God, King of the Netherlands, Prince of Orange-Nassau, etc. etc. etc., by which the triple 'etc.' refers to the monarch's many dormant titles. 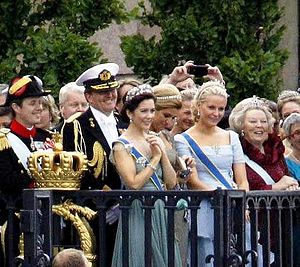 In his capacity as the Sovereign, Willem-Alexander is Grand Master of the Military Order of William (Militaire Willemsorde) and the other Dutch orders of merit.

Main article: Coat of Arms of the Netherlands

Through his father, a member of the House of Amsberg, he is descended from families of the lower German nobility, and through his mother, from several royal German/Dutch families such as the House of Lippe, Mecklenburg-Schwerin, the House of Orange-Nassau, Waldeck and Pyrmont, and the House of Hohenzollern. He is descended from the first King of the Netherlands, William I of the Netherlands, who was also a ruler in Luxembourg and several German states, and all subsequent Dutch monarchs. By his mother, Willem-Alexander also descended from Paul I of Russia and thus from German princess Catherine the Great. Through his father, he is also descended from several Dutch/Flemish families who left the Low Countries during Spanish rule, such as the Berenbergs. His paternal great-great-grandfather Gabriel von Amsberg (1822–1895), a Major-General of Mecklenburg, was recognized as noble as late as 1891, the family having adopted the "von" in 1795.[64][65]

King Willem-Alexander is a descendant of King George II and more relevant for his succession rights of King George III. Under the British Act of Settlement, King Willem-Alexander temporarily forfeited his (distant) succession rights to the throne of the United Kingdom by marrying a Roman Catholic. This right has since been restored in 2015 under the Succession to the Crown Act 2013.[66]