Born in Perry, Ohio, Allison was educated at Wooster Academy.[1] Afterward, he spent a year at Allegheny College in Pennsylvania, then graduated from Western Reserve College (then located in Hudson, Ohio) in 1849. He then studied law and began practicing in Ashland, Ohio. While practicing law there from 1852 until 1857, he was a delegate to the 1855 Ohio Republican Convention and an unsuccessful candidate for district attorney in 1856.[1] In 1857, he moved to Dubuque, Iowa, which would serve as his hometown for the last fifty years of his life.

After his arrival in Dubuque, Allison took a prominent part in the politics of the nascent Republican Party. Allison was a delegate to the 1860 Republican National Convention in Chicago,[2] which nominated Abraham Lincoln for President of the United States.

During the subsequent Civil War, he was on the staff of Iowa Governor Samuel J. Kirkwood, who ordered him to help the state raise regiments for the war. He personally helped raise four regiments. He was given the rank of lieutenant colonel during the war, although it was unlikely he actually served in uniform.

In 1862, in the midst of the war, Allison was elected to the United States House of Representatives as the representative of Iowa's newly created 3rd congressional district.[3] As a congressman and member of the House Ways and Means Committee,[1] he pushed for higher tariffs. 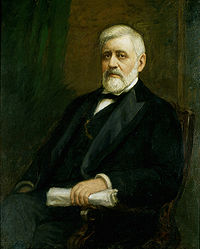 Portrait of Senator Allison which hangs in the U.S. Capitol.

Following the war, Allison continued to serve in the House after winning re-election in 1866 and 1868. In January 1870, he was an unsuccessful candidate for election by the Iowa General Assembly to the United States Senate seat for 1871–1877, losing to Iowa Supreme Court Justice George G. Wright.[4] Allison declined to be a candidate for renomination to his own House seat later that year, but instead focused on laying the groundwork to run for Iowa's other Senate seat (then held by James Harlan), which was up in January 1872, following November 1871 state legislative races.[5] In the 1871 state legislative races, candidates were nominated and elected on the direct issue of whether they would vote for Harlan, Allison or James F. Wilson for senator.[6] Enough legislators who favored Allison were nominated and elected in 1871 that in January 1872 he won the required number of votes to take Harlan's U.S. Senate seat, effective March 4, 1873.[5][6]

Allison chaired the 1884–1886 Allison Commission, a bipartisan joint congressional committee "among the first to explore the question of whether federal intervention politicizes scientific research."[7] It considered the charge that parts of the government were engaged in research for theoretical, not practical, purposes. The majority report favored the status quo, and Congress upheld it.[7] In 1885, the Commission's finding of misuse of funds at the U.S. Coast and Geodetic Survey led to the dismissal of several officials but exonerated Charles Sanders Peirce.

He was twice asked to serve as the Secretary of the Treasury, first by President Chester Arthur (to which Allison agreed but then the next day declined),[8] then by President Benjamin Harrison. In 1897, President William McKinley offered him the position of U.S. Secretary of State.[1] Again, Allison declined.[9]

It was just as well. No Republican senator was so well fitted for the duties of responsible statesmanship, or positioned so well. For thirty years he sat on the Senate Finance Committee and took a critical role in framing legislation. In 1881, he became chairman of the Appropriations Committee, and continued to serve there until his death in 1908. After 1897, he was chosen as chairman of the Republican caucus, an unofficial position, but one generally accorded to the most venerable and respected party member in the Senate.

Eminently conservative, trusted by the railroad interests, Allison's pragmatism made him the centrist that everybody could deal with, even the Democrats. When in 1888 a Republican alternative was needed to the Mills tariff bill coming out of the House, Allison handled the details. The bill that emerged from committee was purely for campaign purposes. Nobody thought that it could pass, but it put the best face on protectionist principles and later served as a model for the 1890 McKinley Tariff, which Allison played a large part in framing. In 1897, when the Dingley Tariff bill reached the Senate, Allison did most of the work reconciling discontented interests. When the Bland bill, allowing the free coinage of silver, came to the Senate, Allison altered it. The resulting Bland-Allison Act of 1878 simply had the government buy a certain, more limited amount of silver, which the Treasury was permitted to put into circulation as silver dollars. It was far less inflationary than Bland's original bill. The Act passed over the veto of President Rutherford B. Hayes. It remained unchanged until the Sherman Silver Purchase Act of 1890. In 1892, Allison chaired the Brussels Monetary Conference and in 1900 was one of the fathers of the Gold Standard Act.

In 1896, he became a dark-horse candidate for the presidency.[10] However, support for his candidacy faded when it became clear that McKinley would be nominated on the first ballot.[11]

"Allison is the man of experience," an admiring reporter wrote in 1906, "the sage old pilot of the Senate. They say that no man who has ever been in the Senate knew so much about it as he does. He is the political forecaster, the compromiser, the weather prophet, the man who brings irreconcilable things together. It is said that the oldest inhabitant cannot recall having heard Allison give utterance to an opinion on any subject whatever. Doubtless he does give utterance to them, but never except in the inner councils of the Caesars. Sagacious to the point of craft, it does not annoy him to know that the epithet most frequently applied to him is 'the Old Fox.'...When he rises in his place in the Senate, he disdains to talk as if he were making a speech; he leaves all that to the youngsters, whose sum of knowledge does not equal all that he has forgotten. He never rises except to shed light on some knotty point, and when he does it is always as briefly as possible, and in a conversational voice that is almost an undertone. Then he drops back into his seat and, with sublime indifference, lets the talk go on."[12]

Allison was married twice. The first marriage was to Anna Carter, who died in 1859, four years after the marriage. His second marriage was to Mary Neally, who died in 1883, ten years after their marriage. Although Allison was a rich man, he did not spend much time thinking about money-making; rather, he was very focused on public and political affairs.

In 1908, as Allison neared his 44th year in Congress, and his 80th birthday, he sought a record seventh term in the Senate.[13] However, Iowa's Republican Governor at the time, Albert B. Cummins, had aspired to become a U.S. Senator for several years, and as leader of Republican progressives had targeted his party's "old guard" for retirement or (if necessary) defeat. After seeming to promise that he would not challenge Allison in 1908, Cummins ran against Allison for the Republican nomination in the state's first-ever congressional primary on June 2, 1908. Much like Allison's 1873 race for the Senate against incumbent Harlan,[5] Cummins' 1908 race for the Senate against incumbent Allison was very acrimonious.[6] However, this time the incumbent prevailed; Allison won a clear victory over Cummins by over ten thousand votes.[14] As a reflection of the nature of its preference for Allison over Cummins, the Ames Times reported the primary results under a two-level banner headline simply stating "GLORY TO GOD!"[15]

Death and his legacy 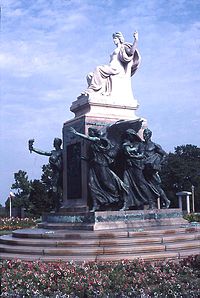 Allison did not live to see the 1908 general election or a seventh term. Two months after his primary win, he died in Dubuque.[16] While many were surprised by his death, news reports soon indicated that he had been under constant medical care for more than two years, and that those familiar with his condition had expected his death.[1] He was interred in Linwood Cemetery in Dubuque.

Governor Cummins was elected by the Legislature to fill the unexpired term of Senator Allison and for the term beginning March 4. 1909, and was re-elected in 1914 and 1920, but in 1926 he lost in the Republican primary to Smith W. Brookhart. Senator Cummins died shortly after his loss in the June 1926 primary.

Senator Allison was the namesake of Allison, Iowa, the county seat of Butler County.

The Allison-Henderson Park in Dubuque was named in honor of Allison and fellow Dubuque icon, U.S. Speaker of the House David B. Henderson.

There is an imposing memorial to Allison by sculptor Evelyn Longman on the grounds of the Iowa State Capitol in Des Moines.