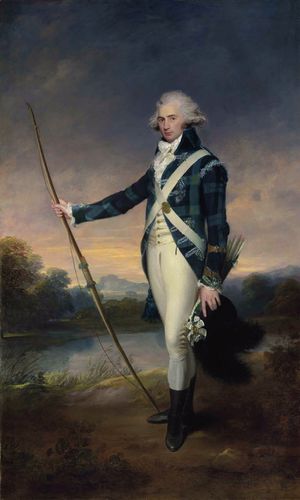 Beechey was born at Burford, Oxfordshire, on 12 December 1753, the son of William Beechey and Hannah Read. Both his parents died when he was still quite young, and he and his siblings were brought up by his uncle Samuel.[1] He was interested in painting from an early age, being admitted to the Royal Academy Schools in 1772, although, according to some accounts, his family intended him to follow his uncle Samuel into a legal career.[2]

In the early part of his painting life Beechey specialised in small-scale full-length portraits.[3] Between 1782 and 1787 he lived in Norwich, and eventually painted four works for the collection of civic portraits hung in St Andrew's Hall in the city, only one was done during his residence there.[4]

Beechey returned to London in 1787. Eventually he came to the notice of the royal family, and in 1793 painted a full-length picture of Queen Charlotte, who appointed him her official portrait painter. In the same year he was elected an associate of the Royal Academy.[5] He painted not only the portraits of the royal family, but of nearly all the most famous or fashionable people of the time. His George III and the Prince of Wales reviewing troops a large composition showing the king and prince surrounded by a brilliant staff on horseback, was painted in 1798. It obtained for him the honour of knighthood, and his election as a full member of the Royal Academy.[6] The painting was destroyed in the 1992 Windsor Castle fire.

His portraits were deficient in grace, his draperies poor and ill cast, and he showed no ability to overcome the graceless stiffness which then prevailed in dress. Yet he possessed much merit, and his portraits have maintained a respectable second rank.[7]

A monograph by W. Roberts, Sir William Beechey, R.A., was published in London 1907 and includes Beechey's account books and a list of works exhibited in his lifetime.