William Black (13 November 1841 – 10 December 1898) was a novelist born in Glasgow, Scotland. During his own lifetime Black's novels were immensely popular, and were compared favourably with those of Anthony Trollope. However, his fame and popularity did not survive long into the twentieth century.

William was born to James Black and his second wife Caroline Conning. He was educated to be a landscape painter, a training that influenced his literary life, and as a writer he became celebrated for the detailed and atmospheric descriptions of landscapes and seascapes in novels such as White Wings: A Yachting Romance (1880).

At the age of twenty-three he went to London, after some experience with Glasgow journalism, and joined the staff of The Morning Star, and, later, the Daily News, of which journal he became assistant-editor. He wrote a weekly serial in "The Graphic". During the Austro-Prussian War he acted as a war correspondent. [1]

His first novel, James Merle, appeared in 1864, and had little success. Black later disowned the novel and reputedly bought copies to destroy them. Two further early novels Love or Marriage (1868) and The Monarch of Mincing Lane (1871) did little to advance his career, and all three were omitted from the collected edition of Black's works issued by the publishing firm Sampson Low from 1892.

It was the publication of A Daughter of Heth in 1871 that at once established his popularity. It is the story of a young girl brought up in Catholic France, who comes to live with her more austere Protestant relatives in southern Scotland, and ends with personal tragedy. The travel story The Strange Adventures of a Phaeton followed in 1872, and in 1874 A Princess of Thule was another big success and was later adapted into a musical play, The Maid of Arran, by a young L. Frank Baum.

Retiring from journalism the next year he devoted himself entirely to fiction. Several collections of short stories and a further 22 novels followed; the last – Wild Eelin – in 1898, just before his death on 10 December of that year.

During his own lifetime Black's novels were immensely popular, and were compared favourably with those of Anthony Trollope, though some critics complained that his writings revealed too much his interest in hunting and fishing.[2] However, his fame and popularity did not survive long into the twentieth century. His works were bootlegged in the United States, not being protected by copyright laws. He teamed with such well-known authors as Rudyard Kipling, Thomas Hardy, and Walter Besant to abolish this procedure, resulting in the passing of new laws in 1891, but unlike the others, he held no grudge against those who sold unauthorised copies of his books while it was legal to do so, which made relations easier and friendlier between him and his American publishers.[3] Baum's play was written without regard to copyright courtesy when such was legal: it is uncertain if Black was even aware of its existence, as Reid never mentions it in his biography.

Among his later novels may be mentioned two further "tragic" tales: Madcap Violet (1876) and Macleod of Dare (1879); Sunrise (1881) a novel of international political intrigue; Shandon Bells (1883) largely set in Ireland; Yolande (1883) which in part deals with drug addiction; Judith Shakespeare (1884) a historical novel featuring the playwright's daughter; and The New Prince Fortunatus (1890) a novel of London theatrical life. Friendship with actor Mary Anderson resulted in him stage acting twice, with mute roles known as "thinkers" (in Romeo and Juliet and The Winter's Tale), but his nervousness interrupted the performance.[4] 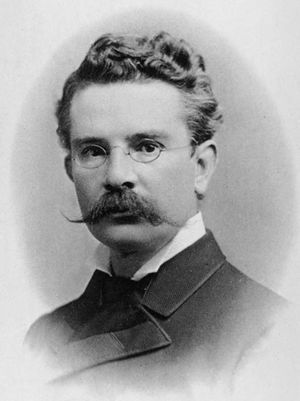 Black is remembered by a lighthouse built in the form of a Gothic tower "on a spot that he knew and loved, by his friends and admirers from all over the world," as recorded on a carved plaque over the door. The building was erected in 1901 and is still in use as a lighthouse. It stands a mile or so south of Duart Castle, at the eastern extremity of the Isle of Mull.[1]

A collection of sketch-stories, including portions of the suppressed James Merle were published posthumously as With the Eyes of Youth, and Other Sketches (1903).

Black's first wife, Augustus Wenzel, died on 14 May 1866 of a fever contracted not long after the birth of their son, Martin. They had only been married since 8 April 1865. Martin would die on 29 March 1871.

He first met his second wife, Eva Simpson, daughter of Wharton Simpson, a fellow journalist and fellow member of Whitefriars Club, in 1869. He saw her again in 1872 and used her as the basis for Bell in The Phaeton. They were married in April 1874 and she was still alive when Wemyss Reid, who had offered Black a contributor's role on the Leeds Mercury, published his biography.

From 1879 until his death he lived at 1 Paston Place, Brighton.