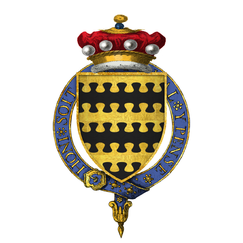 William Blount, 4th Baron Mountjoy (c.1478–1534), KG, of Barton Blount, Derbyshire, was an English courtier, scholar and patron of learning. He was one of the wealthiest English nobles of his time.

Blount was a pupil of Erasmus, who called him inter nobiles doctissimus ("The most learned amongst the nobles"). His friends included John Colet, Thomas More and William Grocyn.

In 1497 he commanded part of a force sent to suppress the rebellion of Perkin Warbeck. In 1509 he was appointed Master of the Mint. In 1513 he was appointed Governor of Tournai, and his letters to Cardinal Wolsey and King Henry VIII describing his vigorous government of the town are preserved in the British Library.[2]

In 1520 he was present with Henry VIII at the Field of the Cloth of Gold, and in 1522 at the king's meeting with Charles V, Holy Roman Emperor. Having served since 1512 as Chamberlain to Queen Catherine of Aragon, it fell to him in that office to announce to her the intention of Henry VIII to divorce her. He also signed the letter to the Pope conveying the king's threat to repudiate papal supremacy unless the divorce were granted.

Mountjoy died on 8 November 1534 and was buried at Barton Blount.