File:Earl of Kilmarnock 1746.JPG
Portrait of William Boyd, from The Newgate Calendar.

William Boyd was educated at Glasgow. Like his father in the rebellion of 1715, William initially supported the Government side, but in the rebellion of 1745, owing either to a personal affront or to the influence of his wife or to his straitened circumstances he deserted George II and joined Charles Edward Stuart, the Young Pretender.

Made a Privy Counsellor to Charles, he was appointed a colonel of guards and subsequently a general. He fought at Falkirk and Culloden, where he was taken prisoner, and was beheaded on Tower Hill on 18 August 1746. 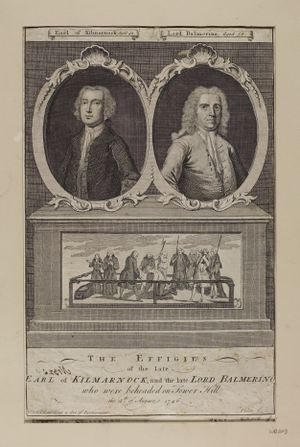 Effigies of Earl of Kilmarnock Lord Balmerino with a scene of execution.

Before his execution, he wrote to a friend from prison about his indebtedness to the shoemakers of Elgin: "Beside my personal debts mentioned in general and particular in the State, there is one for which I am liable in justice, if it is not paid, owing to poor people who gave their work for it by my orders. It was at Elgin in Murray, the Regiment I commanded wanted shoes. I commissioned something about seventy pair of shoes and brogues, which might come to 3 shillngs or three shillings and sixpence each, one with the other. The magistrates divided them among the shoemakers of the town and country, and each shoemaker furnished his proportion. I drew on the town, for the price, out of the composition laid on them, but I was afterwards told at Inverness that, it was believed, the composition was otherwise applied, and the poor shoemakers not paid. As these poor people wrought by my orders, it will be a great ease to my heart to think they are not to lose by me, as too many have done in the course of that year, but had I lived I might have made some inquiry after: but now it is impossible, as their hardships in loss of horses and such things, which happeened through my soldiers, are so interwoven with what was done by other people, that it would be very hard, if not impossible, to separate them. If you'll write to Mr Innes of Dalkinty at Elgin (with whom I was quartered when I lay there), he will send you an account of the shoes, and if they were paid to the shoemakers or no; and if they are not, I beg you'll get my wife, or my successors to pay them when they can......"

On his coffin was a plate with the inscription, 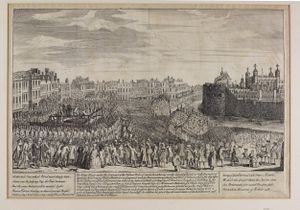 Execution of the Earl of Kilmarnock and Cromarty, and Lord Balmerino