William Carlos Williams (September 17, 1883 – March 4, 1963) was an American poet closely associated with modernism and imagism. Williams is often counted as being among a group of four major American poets who were all born in a twelve-year period that began in 1874. The group also consists of Robert Frost, who was born in 1874; Wallace Stevens, who was born in 1879; and Hilda "H.D." Doolittle, who was born in 1886. Of these four, Williams died last, several weeks after Frost. (Stevens was first to die, in 1955, while H.D. lived until 1961).

In addition to his writing, Williams had a long career as a physician practicing both pediatrics and general medicine. He was affiliated with what was then known as Passaic General Hospital in Passaic, New Jersey, where he served as the hospital's chief of pediatrics from 1924 until his death. The hospital, which is now known as St. Mary's General Hospital, pays tribute to Williams with a memorial plaque that states "we walk the wards that Williams walked".[1]

Williams was born in Rutherford, New Jersey. His grandmother, an Englishwoman deserted by her husband, had come to the United States with her son, remarried, and moved to Puerto Rico. Her son, Williams's father, married a Puerto Rican woman of French Basque and Dutch Jewish descent.

Williams received his primary and secondary education in Rutherford until 1897, when he was sent for two years to a school near Geneva and to the Lycée Condorcet in Paris. He attended the Horace Mann School upon his return to New York City and, having passed a special examination, was admitted in 1902 to the medical school of the University of Pennsylvania, from which he graduated in 1906.[2][3] Upon leaving University of Pennsylvania, Williams did internships at both French Hospital and Child's Hospital in New York before going to Leipzig for advanced study of pediatrics.[2] He published his first book, Poems, in 1909.

Williams married Florence Herman (1891–1976) in 1912, after he returned from Germany.[2] They moved into a house in Rutherford, New Jersey, which was their home for many years. Shortly afterward, his second book of poems, The Tempers, was published by a London press through the help of his friend Ezra Pound, whom he met while studying at the University of Pennsylvania. Around 1914, Williams had his first son, William E. Williams, followed by his second son, Paul H. Williams, in 1917.[4] His first son would grow up to follow Williams in becoming a doctor.[5]

Although his primary occupation was as a family doctor, Williams had a successful literary career as a poet. In addition to poetry (his main literary focus), he occasionally wrote short stories, plays, novels, essays, and translations. He practiced medicine by day and wrote at night. Early in his career, he briefly became involved in the Imagist movement through his friendships with Pound and H.D. (whom he also befriended at the University of Pennsylvania), but soon he began to develop opinions that differed from theirs.

In 1915 Williams began to associate with a group of New York artists and writers known as "The Others."[6] Founded by the poet Alfred Kreymborg and the artist Man Ray, this group included Walter Conrad Arensberg, Wallace Stevens, Mina Loy, Marianne Moore and Marcel Duchamp.

In 1920, Williams was sharply criticized by many of his peers (such as H.D., Pound, and Wallace Stevens) when he published one of his most experimental books, Kora in Hell: Improvisations. Pound called the work "incoherent" and H.D. thought the book was "flippant."[7] The Dada artist and poet Baroness Elsa von Freytag-Loringhoven critiqued Williams's sexual and artistic politics in her experimental prose poem review entitled "Thee I call 'Hamlet of Wedding Ring'", published in The Little Review in March 1921.[8]

A few years later, Williams published one of his seminal books of poetry, Spring and All, which contained the classic poems "By the road to the contagious hospital," "The Red Wheelbarrow," and "To Elsie." However, in 1922, the year before Williams published Spring and All, T.S. Eliot published The Waste Land which became a literary sensation and overshadowed Williams's very different brand of poetic Modernism. In his Autobiography, Williams would later write, "I felt at once that The Waste Land had set me back twenty years and I'm sure it did. Critically, Eliot returned us to the classroom just at the moment when I felt we were on a point to escape to matters much closer to the essence of a new art form itself—rooted in the locality which should give it fruit." And although he respected the work of Eliot, Williams became openly critical of Eliot's highly intellectual style with its frequent use of foreign languages and allusions to classical and European literature.[9] Instead, Williams preferred colloquial American English.[10]

–Say it, no ideas but in things–
nothing but the blank faces of the houses
and cylindrical trees
bent, forked by preconception and accident–
split, furrowed, creased, mottled, stained–
secret–into the body of the light!

In his modernist epic collage of place entitled Paterson (published between 1946 and 1958), an account of the history, people, and essence of Paterson, New Jersey, Williams wrote his own modern epic poem, focusing on "the local" on a wider scale than he had previously attempted. He also examined the role of the poet in American society and famously summarized his poetic method in the phrase "No ideas but in things" (found in his poem "A Sort of a Song" and repeated again and again in Paterson).

In his later years, Williams mentored and influenced many younger poets. He had an especially significant influence on many of the American literary movements of the 1950s, including the Beat movement, the San Francisco Renaissance, the Black Mountain school, and the New York School.[11]

One of Williams's most dynamic relationships as a mentor was with fellow New Jersey poet Allen Ginsberg. Williams included several of Ginsberg's letters in Paterson, stating that one of them helped inspire the fifth section of that work. Williams also wrote the introduction to Ginsberg's important first book, Howl and Other Poems in 1956.

Williams suffered a heart attack in 1948 and after 1949, a series of strokes. Severe depression after one such stroke caused him to be confined to Hillside Hospital, New York, for four months in 1953. He died on March 4, 1963, at the age of 79 at his home in Rutherford.[12][13] He was buried in Hillside Cemetery in Lyndhurst, New Jersey.[14] 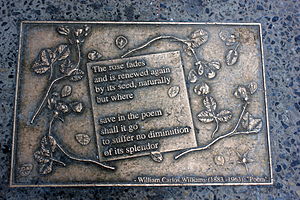 The poet and critic Randall Jarrell said of his poetry, "William Carlos Williams is as magically observant and mimetic as a good novelist. He reproduces the details of what he sees with surprising freshness, clarity, and economy; and he sees just as extraordinarily, sometimes, the forms of this earth, the spirit moving behind the letters. His quick transparent lines have the nervous and contracted strength, move as jerkily and intently as a bird."[15] R. P. Blackmur said of Williams poetry "the Imagism of 1912 , self-transcended."[16]A contemporary, Harriet Monroe said of Williams 'to assert his freedoms he must play the devil, showing himself rioting in purple and turquoise pools of excess.'[17]

Williams's major collections are Spring and All (1923), The Desert Music and Other Poems (1954), Pictures from Brueghel and Other Poems (1962), and Paterson (1963, repr. 1992). His most anthologized poem is "The Red Wheelbarrow", an example of the Imagist movement's style and principles (see also "This Is Just To Say"). However, Williams, like his peer and friend Ezra Pound, had already rejected the Imagist movement by the time this poem was published as part of Spring and All in 1923.

Williams is strongly associated with the American modernist movement in literature and saw his poetic project as a distinctly American one; he sought to renew language through the fresh, raw idiom that grew out of America's cultural and social heterogeneity, at the same time freeing it from what he saw as the worn-out language of British and European culture. In 1920, this project took shape in Contact, a periodical launched by Williams and fellow writer Robert McAlmon: "The two editors sought American cultural renewal in the local condition in clear opposition to the internationalists—Pound, The Little Review, and the Baroness."[18] Yvor Winters, the poet/critic, judged that Williams's verse bears a certain resemblance to the best lyric poets of the 13th century.[19]

Williams sought to invent an entirely fresh and uniquely American form of poetry whose subject matter centered on everyday circumstances of life and the lives of common people. He came up with the concept of the "variable foot" which Williams never clearly defined, although the concept vaguely referred to Williams's method of determining line breaks. The Paris Review called it "a metrical device to resolve the conflict between form and freedom in verse."[20]

One of Williams's aims, in experimenting with his "variable foot", was to show the American (opposed to European) rhythm that he claimed was present in everyday American language. Stylistically, Williams also worked with variations on a line-break pattern that he labeled "triadic-line poetry" in which he broke a long line into three free-verse segments. A well-known example of the "triadic line [break]" can be found in Williams's love-poem "Asphodel, That Greeny Flower."[21]

In a review of Herbert Leibowitz's biography of William Carlos Williams, "Something Urgent I Have to Say to You": The Life and Works of William Carlos Williams, book critic Christopher Benfey wrote of Williams's poetry: "Early and late, Williams held the conviction that poetry was, in his friend Kenneth Burke's phrase, 'equipment for living, a necessary guide amid the bewilderments of life.' The American ground was wild and new, a place where a blooming foreigner needed all the help he could get. Poems were as essential to a full life as physical health or the love of men and women."[22] Williams expressed this viewpoint most famously in a line from his poem "Asphodel, That Greeny Flower" in which he wrote:

It is difficult
to get the news from poems
yet men die miserably every day
for lack
of what is found there.[23] 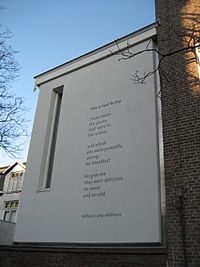 This Is Just To Say (wall poem in The Hague)

The U.S. National Book Award was reestablished in 1950 with awards by the book industry to authors of 1949 books in three categories. Williams won the first National Book Award for Poetry, recognizing both the third volume of Paterson and Selected Poems.[24]

In May 1963, he was posthumously awarded the Pulitzer Prize for Pictures from Brueghel and Other Poems (1962) and the Gold Medal for Poetry of the National Institute of Arts and Letters. The Poetry Society of America continues to honor William Carlos Williams by presenting the prestigious William Carlos Williams Award annually for the best book of poetry published by a small, non-profit or university press.

Williams's house in Rutherford is now on the National Register of Historic Places. He was inducted into the New Jersey Hall of Fame in 2009.[25]