He was elected MP for Derbyshire in 1741 and 1747. Devonshire was a supporter of Sir Robert Walpole and, after Walpole's fall from power, of the Pelhams. Henry Pelham wrote to Devonshire's father that he was "our mainstay among the young ones, of themselves liable to wander".[2]

Horace Walpole described him as "a favourite by descent of the Old Whigs"[3] and as "errant [a] bigot to the Pelham faction as ever Jacques Clément was to the Jesuits".[4]

He had been offered the post of governor to the Prince of Wales but he declined.[5]

Pelham appointed him Master of the Horse, a post he held until 1755 and which necessitated his leaving the House of Commons for the House of Lords by writ of acceleration as Baron Cavendish and joining the Privy Council.[6] Devonshire supported the Duke of Newcastle after Henry Pelham's death in 1754 and was Lord Lieutenant of Ireland from 2 April 1755 until 3 January 1757 in Newcastle's administration. In April 1755 Devonshire was one of the Lords Justices of the realm upon the King's absence in Hanover.[7]

Devonshire succeeded to the dukedom in December 1755 after his father died.

The Seven Years' War was going badly for Britain under the leadership of the Duke of Newcastle and when he resigned in October 1756, George II eventually asked Devonshire to form an administration.[8] Devonshire accepted on the condition that his tenure would last only until the end of the parliamentary session. Devonshire believed his duty to the King required an administration capable of prosecuting the war successfully.[9]

Devonshire was given the Garter and appointed First Lord of the Treasury (most historians consider him Prime Minister during this service) in November 1756, and he served as First Lord until May 1757 in an administration effectively run by William Pitt. Devonshire's administration secured increased money for the war, troops were sent to America and a Militia Act was passed.[10]

The administration was eventually brought down for a variety of reasons including the opposition of George II and the alleged mishandling of the trial and execution of Admiral John Byng. It was replaced by the Second Newcastle Ministry headed by the Duke of Newcastle and including Pitt, Henry Fox and the Duke of Bedford. This government steered Britain through most of the Seven Years' War leading the country to ultimate victory.

Devonshire was Lord Chamberlain in Newcastle's government (with a seat in the inner Cabinet) and his relations with him were close.[11] George II died in October 1760 and was succeeded by his grandson George III, who was suspicious of Devonshire and Newcastle. When Newcastle resigned in May 1762 Devonshire said that he would rarely attend Lord Bute's Councils. When in October George III requested that he attend a Cabinet meeting on peace terms, Devonshire declined, claiming he had inadequate knowledge of the subject.[12] On 28 October, travelling from Kew to London, the King overtook Devonshire and Newcastle's coach in the belief that the two dukes were plotting and that Devonshire was coming to tender his resignation. Devonshire in fact was passing through London to Chatsworth and had come to give his leave to the King. When Devonshire arrived, George III refused to see him, as he later wrote: "I ordered the page to tell him I would not see him, on which he bid him ask me with whom he should leave his wand...I said he would receive my orders...On the Duke of Devonshire's going away he said to the page, “God bless you, it will be very long before you see me here again”." At a meeting of the Privy Council four days later the King personally struck out Devonshire's name from the list of Privy Councillors. In the opinion of one of his biographers, John Brooke, "Few things in King George III's long life show him in so poor a light".[13]

Devonshire resigned his Lord Lieutenancy of Derbyshire in solidarity with Newcastle and Rockingham when they were dismissed from their Lord Lieutenancies.[14]

He had long had a weak constitution and he gradually grew more ill during these years. He ultimately died in the Austrian Netherlands where he had gone to take the waters at Spa. His death was a large political loss to his allies, the Whig magnates such as the Duke of Newcastle. Dying at the age of 44 years and 147 days, he remains the shortest lived British Prime Minister. Devonshire was buried at Derby Cathedral.[15]

He married Lady Charlotte Elizabeth Boyle, 6th Baroness Clifford (1731–1754), the daughter and heiress of Richard Boyle, 3rd Earl of Burlington of the first creation, a famous architect and art collector. Through her, the Devonshires inherited Chiswick House and Burlington House in London; Bolton Abbey and Londesborough Hall in Yorkshire; and Lismore Castle in County Waterford, Ireland. The Duke employed Capability Brown to landscape the garden and park at Chatsworth House, his main residence. He hired James Paine to design the new stable block.

The Duke had four children: 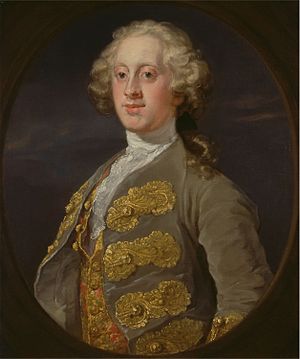 The Duke of Devonshire

Horace Walpole described Devonshire as possessing "an impatience to do everything, and a fear to do anything, he was always in a hurry to do nothing".[16] Paul Langford said Devonshire was "eminently sensible and highly respected", and that his death "left a marked gap in the ranks" of the opposition and "effectively destroyed a generation in the ‘Old Whig’ leadership".[17] Gerald Howat summed up Devonshire's life:

Devonshire had been a moderate among men of great political passion. If scarcely a spectator in the play of events, he had never bestrode the stage. His death, coming just after those of Hardwicke and Legge, deprived the Whigs of three material men. Given health, he might have returned to office in the Crown's restless pursuit of ministers up to 1770. He had been a man with a concern for king and country. He died the acknowledged leader of the Whigs.[14]

Devonshire was a man of solid if not outstanding abilities. He was endowed with the qualities—devotion to friends and duty, patriotism, and unswerving integrity—which made him the ideal sounding board and factotum among the prominent politicians of his day. Unlike Pitt or Fox he lacked a brilliant mind, and his diary provides evidence of devotion to king, country, and duty rather than quickness of intellect. A political broker rather than a leader, he exploited his personal popularity and family prestige to mediate between the factious and egotistical individuals who dominated Dublin and Westminster politics in the 1750s and early 1760s.[18]