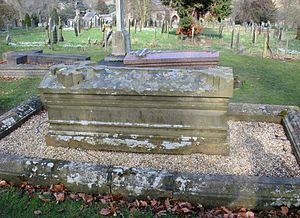 Born in Paris, France, Devonshire was the son of William Cavendish, 5th Duke of Devonshire, and Lady Georgiana, daughter of John Spencer, 1st Earl Spencer.[1] He was educated at Harrow and Trinity College, Cambridge.[2] His mother died in 1806 and in 1811, aged 21, he succeeded his father in the dukedom.[3] Along with the title he inherited eight stately homes and 200,000 acres (809 km² or 80,900 ha) of land. He went on to improve his houses and gardens (including the rebuilding of the village of Edensor) and travelled extensively.[citation needed]

Politically Devonshire followed in the Whig family tradition. He supported Catholic emancipation and the abolition of slavery and reduced factory working hours.[4] He held office as Lord Chamberlain of the Household under George Canning and Lord Goderich between 1827 and 1828 and under Lord Grey and Lord Melbourne between 1830 and 1834. In 1827 he was sworn of the Privy Council[5] and made a Knight of the Garter.[5] He was appointed Ambassador Extraordinary to the Russian Empire on the coronation of Czar Nicholas I in 1826.[6]

Devonshire was also Lord Lieutenant of Derbyshire between 1811 and 1858[7] and carried the Orb at the coronation of George IV in 1821. However, increasing deafness from an early age prevented him from taking an even greater part in public life.[4]

Devonshire was a close friend of the Prince Regent.[4] Other friends included Antonio Canova and Charles Dickens.[citation needed] He befriended Sir Joseph Paxton, then employed at the Royal Horticultural Society's Chiswick Gardens, located close to Devonshire's London estate Chiswick House, and appointed him his head gardener at Chatsworth House in 1826, despite Paxton being only in his early twenties at the time. Paxton greatly expanded the gardens at Chatsworth, including the construction of a 300 foot long conservatory, which served as a model for The Crystal Palace constructed in London's Hyde Park. Devonshire himself developed a keen interest in horticulture and was elected President of the Royal Horticultural Society in 1838, a position in which he served for twenty years until his death.[8] It was this interest which led him to establish the Royal Botanic Gardens at Kew as a national botanic garden.[8] He was also patron of The Derby Town and County Museum and Natural History Society, which founded Derby Museum and Art Gallery 1836.[9]

The world's most commercially exploited banana, the Cavendish, was named in honour of William Cavendish, who acquired an early specimen, which he raised in his glasshouse. This plant is the progenitor of almost all the worldwide varieties of Cavendish banana.[10]

Much of Devonshire's private correspondence, including letters to his mistresses (one of whom he installed nearby), was destroyed by his Victorian relatives. He intended to marry Lady Caroline Ponsonby, his cousin, but she married William Lamb, which he found devastating.[1]

Devonshire died at Hardwick Hall, Derbyshire,[4] in January 1858, aged 67. As he was unmarried the dukedom passed to his cousin William Cavendish, 2nd Earl of Burlington. His junior title of Baron Clifford fell into abeyance between his sisters, Georgiana, Countess of Carlisle, and Harriet, Countess Granville.[3]