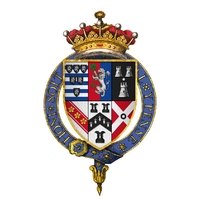 Exeter was the son of Thomas Cecil, 1st Earl of Exeter, and Dorothy Neville, daughter of John Neville, 4th Baron Latimer.[2] He was educated at Trinity College, Cambridge, and travelled on the continent before being admitted to Gray's Inn.[3]

In 1589, William married Elizabeth Manners, the only child of the 3rd Earl of Rutland, and they had one child:

Elizabeth died in 1591 and William married Elizabeth Drury, daughter of Sir William Drury and Elizabeth Stafford, and they had three children: