Sir William Chambers RA (23 February 1723 – 10 March 1796) was a Scottish-Swedish architect, based in London. Among his best-known works are Somerset House, London, and the pagoda at Kew. Chambers was a founder member of the Royal Academy.

William Chambers was born on 23 February 1723 in Gothenburg, Sweden, to a Scottish merchant father.[1][2]

Between 1740 and 1749 he was employed by the Swedish East India Company making three voyages to China[3] where he studied Chinese architecture and decoration.

Returning to Europe, he studied architecture in Paris (with J. F. Blondel) and spent five years in Italy. Then, in 1755, he moved to London, where he established an architectural practice. Through a recommendation of the 4th Earl of Bute in 1757[4] he was appointed architectural tutor to the Prince of Wales, later George III, and in 1766 also, along with Robert Adam, Architect to the King, (this being an unofficial title, rather than an actual salaried post with the Office of Works).[5] He worked for Augusta, Dowager Princess of Wales making fanciful garden buildings at Kew, and in 1757 he published a book of Chinese designs which had a significant influence on contemporary taste. He developed his Chinese interests further with his Dissertation on Oriental Gardening (1772), a fanciful elaboration of contemporary English ideas about the naturalistic style of gardening in China. 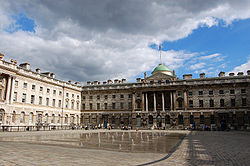 The central courtyard of Chambers' Somerset House in London. The pavement fountain was installed in the 1990s.

His more serious and academic Treatise on Civil Architecture published in 1759 proved influential on builders; it went into several editions and was still being republished in 1826.[citation needed] It dealt with the use of the classical orders, and gave suggestions for decorative elements, rather than dealing with construction and planning; for its third edition it was retitled A Treatise on the Decorative Parts of Civil Architecture. It included ideas from the works of many 16th- and 17th-century Italian architects then still little known in Britain.[6] His influence was also transmitted through a host of younger architects trained as pupils in his office, including Thomas Hardwick (1752–1825), who helped him build Somerset House and who wrote his biography.

He was the major rival of Adam in British Neoclassicism. Chambers was more international in outlook (his knighthood being originally a Swedish honour) and was influenced by continental neoclassicism (which he in turn influenced) when designing for British clients. A second visit to Paris in 1774 confirmed the French cast to his sober and conservative refined blend of Neoclassicism and Palladian conventions.

From around 1758 to the mid-1770s, Chambers concentrated on building houses for the nobility, beginning with one for Lord Bessborough at Roehampton.[7] In 1766 Chambers was elected a foreign member of the Royal Swedish Academy of Sciences. From 1761 he held the unofficial post of Joint Architect to the King,[8] he was then promoted to his first official post in the Office of Works and was from 1769–82 Comptroller of the King's Works, his final promotion put him in charge, from 1782 being Surveyor-General and Comptroller a post he kept until his death.

When a scheme to unite a number of government offices on the site of Somerset House in the Strand was projected, his position did not give him automatic authority over the construction; however when William Robinson, secretary to the board, who had been put in charge of the new building, died in 1775, Chambers became its architect. His initial plans for a great oval courtyard, connected to three smaller, narrow rectangular courts, were soon modified into a simpler rectalinear scheme.[9]

On 10 December 1768 the Royal Academy was founded. Chambers played an important role in the events that led to the Academy's foundation,[10] the Minutes of the General Assembly of the Royal Academy of 14 December 1768 record 'That some time towards the latter end of November 1768, Mr Chambers waited upon the King and informed him that many artists of reputation together with himself are very desirous of establishing a Society that should more effectively promote the Arts of Design'. He was appointed the Academy's first Treasurer.

Chambers died in London in 1796. He is buried in Poets' Corner in Westminster Abbey.[11]