William Chatterton Dix (14 June 1837 – 9 September 1898) was an English writer of hymns and carols. He was born in Bristol, the son of John Dix, a local surgeon, who wrote The Life of Chatterton the poet, a book of Pen Pictures of Popular English Preachers and other works.[1] His father gave him his middle name in honour of Thomas Chatterton, a poet about whom he had written a biography.[2] He was educated at the Grammar School, Bristol, for a mercantile career, and became manager of a maritime insurance company in Glasgow where he spent most of his life.[3] 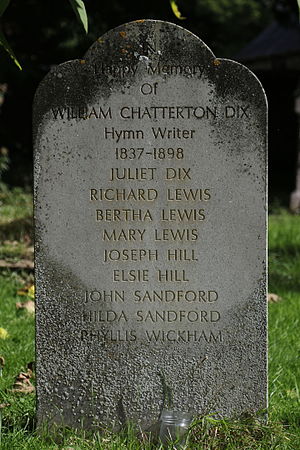 Tomb in the churchyard of St Andrew's Church, Cheddar

Few modern writers have shown so signal a gift as his for the difficult art of hymn-writing.[3] His original hymns are found in most modern hymn-books.[1] He wrote also felicitous renderings in metrical form of Richard Frederick Littledale's translations from the Greek in his Offices of the Holy Eastern Church; and of Rodwell's translations of Abyssinain hymns.[3] Some of his carols, such as The Manger Throne, have been very popular.[3] His hymns and carols also include As with Gladness Men of Old, What Child Is This?, To You, O Lord, Our Hearts We Raise and Alleluia! Sing to Jesus.

At the age of 29 he was struck with a near fatal illness and consequently suffered months confined to his bed. During this time he became severely depressed. Yet it is from this period that many of his hymns date.[4][5] He died at Cheddar, Somerset, England, and was buried at his parish church.