William Damon (born in Brockton, Massachusetts) is a Professor of Education at the Stanford Graduate School of Education, Director of the Stanford Center on Adolescence, and senior fellow at Stanford University's Hoover Institution on War, Revolution, and Peace. He is one of the world's leading researchers on the development of purpose in life and the author of the widely influential book The Path to Purpose. Damon also helped develop innovative educational methods such as peer collaboration, project-based learning, and the youth charter. His current work includes a project to promote good work among professionals in a variety of leading fields, and a scientific study that explores the development of character in adolescence and adulthood. Dr. Damon writes on intellectual and moral development through the lifespan. He is the founding editor of New Directions for Child and Adolescent Development and editor-in-chief of The Handbook of Child Psychology (1998 and 2006 editions). Damon has been elected to the National Academy of Education and the American Academy of Arts and Sciences.

Damon grew up in Brockton, Massachusetts and attended public schools there. His mother Helen was a shoe designer. His father Philip served in the army during World War II and did not return from the war. Damon moved in with his mother's uncle Louis Meyers, who helped raised him and sent him to Phillips Academy and Harvard.[1]

After college, Damon received a doctorate in developmental psychology at U. C. Berkeley in 1974. He was a social worker in New York City for two years and wrote part-time for alternative newspapers, including Rolling Stone. In the 1980s and 1990s, Damon also did part-time work with television and film studios to develop educational content for young people in shows such as Ghost Writer and The Big Bag.

Damon is the author of 18 books and numerous book chapters and articles on education and human development, especially moral development. His work has been influential for research and theory in academic developmental psychology and in the broader society, especially around questions of childrearing and schooling that supports children’s social and moral development. Damon’s editorship of the 5th and 6th editions of the Handbook of Child Psychology places him–along with Carl Murchison, Leonard Carmichael, and Paul Mussen–as one of the great organizers and synthesizers of developmental science. As part of Damon’s commitment to the study of human growth, he also was the founder and long-term editor of the series New Directions for Child and Adolescent Development.

By the time Damon captured the attention of the popular press with his book The Moral Child: Nurturing Children’s Natural Moral Growth (1990), he had written and edited seven scholarly books on the social and moral development of children. His early works include The Social World of the Child (1977), Moral Development (1978), and Social and Personality Development: Infancy through Adolescence (1983). These studies focused on how the moral conduct of children and adolescents plays out in real social situations. Damon emphasized that moral thinking and behavior develop in dynamic relationship with family, peers, teachers, and the larger social world. Moral emotions (such as empathy, shame, and guilt) and the principles of distributive justice (which can be seen in sharing) flourish, or may be smothered, within these relationships.

The Moral Child marked a shift in Damon’s scholarship. The book surveyed and synthesized the large, complex body of research on moral development and translated it for the general public. In addition to bringing him a new audience, the book articulated the implications of the best research for educational practice, childrearing and family relations, communities, and the American culture more broadly.

In 1995, Damon gained an even larger popular audience with his book, Greater Expectations: Overcoming the Culture of Indulgence in Our Homes and Schools (1995), which won the Parent’s Choice Book Award and was the subject of wide media coverage. The book proposed that prevailing child-rearing beliefs and practices are not leading to morally mature or competent young people. Damon argued that, “with best intentions,” parents and schools have been in large part responsible for this situation: our culture's unwavering focus on self-esteem and child-centered practices are misguided and reflect a misunderstanding of “the nature of children and their developmental needs. . . .All the commonly accepted standards for young people’s skills and behavior have fallen drastically. Less is expected of the young, and in turn less is received.” To build character and competence requires high moral standards and expectations. The book received praise from reviewers who agreed with Damon's emphasis on high standards for achievement and service. But the book received criticism from those who believed that children need more attention and more creative freedom to grow rather than, as Damon wrote, the encouragement to take on hard challenges and to develop internal disciple and good habits.

Another important focus in Damon’s work has been his study of moral exemplars. His first book on this subject, Some Do Care: Contemporary Lives of Moral Commitment (1992), written with developmental psychologist Anne Colby, opened up a new perspective on moral development and has been widely cited and built upon in the field. Damon and Colby studied individuals who had shown “a sustained commitment to moral ideals or principles” over many decades of their lives. The authors found a number of qualities that were consistent across the entire group of exemplars, including a sense of certainty about their core moral beliefs, a positive attitude toward hardship and challenge, receptivity toward new ideas and goals, a lifelong capacity for moral growth, and a strong integration of their moral values into their sense of self. This book promoted the "moral identity" theory, which maintains that moral commitment and moral action are a function of how important morality is to a person's sense of self. Damon's theory stands in contrast to theories that emphasize the primary importance of moral reasoning skills (Kohlberg), emotions (Haidt), or cultural background (Shweder). For this reason, Damon has been criticized as an individualist,a universalist, and a neo-Aristotelian, positions which have all been out of vogue in the social sciences in recent years. His work has also been criticized for its case study and interview methodology, which some believe to be less rigorous (though more evocative) than experimental studies. 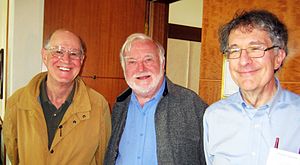 Damon has also worked with Howard Gardner and Mihaly Csikszentmihalyi on the Good Work Project (GWP). The project studies exemplary leaders and practitioners known in their professions for doing work that is both successful in the usual terms of the field as well as highly ethical. The project seeks to understand the values, motives, and adaptive approaches of these individuals, as well as the challenges and pressures they face. Damon coauthored, with Gardner and Csikszentmihalyi, Good Work: When Excellence and Ethics Meet (2001) and has written books on business and philanthropy based on the project (The Moral Advantage and Taking Philanthropy Seriously, in 2004 and 2006).

The Good Work Project aims not only to understand good work but also to promote it in the professions it studies. Damon partnered for several years with the Committee of Concerned Journalists (CCJ) to produce educational curriculum and training workshops to support high quality journalism that reflects the principles identified in the Good Work study of that profession. The program has been delivered to more than 6,000 newspeople in more than 200 print, online, broadcast journalism organizations.

Damon's current work is aimed at promoting "the character and competence of all young people growing up in today’s world . . . [to provide] guidance for parenting, for improved educational practice, and for youth development in a wide variety of community settings.” One study that is currently underway, for example, looks at young people who exhibit a striking sense of moral purpose. This research has been expanded in the works of Dr. Kendall Cotton Bronk and Dr. Jenni Menon Mariano. In addition, Damon's youth purpose work is closely connected with the "positive youth development" approach pioneered by Peter L. Benson and Richard M. Lerner.

In 2008, Damon published The Path to Purpose, the culmination of Damon's twenty-five-year research program on personal identity and moral commitment in human development. The book has been widely cited as the first scientific treatment of how young people find fulfilling purposes in life. The Path to Purpose presents Damon's vision of how schools and parents can help young people find elevated goals to dedicate themselves to, and it contains a critique of prevalent "short-horizons thinking" in today's culture that fosters cynicism and anxiety rather than inspiration and optimism.

In a recent book on civic education, entitled Failing Liberty 101, Damon examined the state of civic participation among American youth. The book followed up findings from research on youth purpose: of all the sources of purpose that today's youth find compelling, civic participation was among the least valued. The book takes up a number of controversial subjects, such as the importance of gratitude, patriotism, and civic virtue, and the validity of the American Dream in today's world.

Damon's most recent book, with his co-author and spouse Anne Colby, is The Power of Ideals: The Real Story of Moral Choice (2015). In the book, Damon and Colby show how people can exert control over their everyday moral choices and remain committed to the ideals they cherish through the cultivation of virtues such as truthfulness, humility, and faith.

Damon is married to Anne Colby, his frequent collaborator on research and writing in human development. He has three children - Jesse, Maria, and Caroline - and a granddaughter Sarah.

Jonathan Yardley of the Washington Post called Damon's book Greater Expectations "A voice of common sense...forthwright, clearheaded and courageous." The book won the Parent's Choice Book Award. Damon's most recent book, The Path to Purpose: How Young People Find Their Calling in Life, received mostly positive reviews. The Library Journal wrote "This brilliant, involving investigation of the 'failure to launch' phenomenon is essential reading for anyone involved in educating, counseling, and directing today's youth." Dawn Friedman of Greater Good magazine, Greater Good Science Center, said, "The book's important message is often lost in dense, academic language, but it still shines through real-world examples." Parker J. Palmer wrote, "Every thoughtful adult I know is concerned that many American youth seem to lack a sense of purpose in their lives. Here is an important book that can help us move beyond concern to insight, public discourse, and action. In “The Path to Purpose: Helping Our Children Find Their Calling in Life,” Bill Damon examines one of the most important personal and social issues of our time, and does so with a rare mix of sound data, compelling theory, practical recommendations and engaging prose. This is a must-read for parents, teachers, civic and religious leaders, and anyone who cares about the fate of the rising generation."