Sir William Davenant (baptised 3 March 1606 – 7 April 1668), also spelled D'Avenant, was an English poet and playwright. Along with Thomas Killigrew, Davenant was one of the rare figures in English Renaissance theatre whose career spanned both the Caroline and Restoration eras and who was active both before and after the English Civil War and during the Interregnum.

Davenant is believed to have been born in late February, 1606 in Oxford, the son of Jane Shepherd Davenant and John Davenant, proprietor of the Crown Tavern (or Crown Inn) and Mayor of Oxford. He was baptised on 3 March, his godfather sometimes being said to have been William Shakespeare,[1] who, according to John Aubrey, had stayed frequently at the Crown during his travels between London and Stratford-upon-Avon.[1] It was even rumoured that he was the Bard's biological son as well. This story was recorded by Aubrey from a comment attributed to Davenant by Samuel Butler:

Mr. William Shakespeare was wont to go into Warwickshire once a year, and did commonly in his journey lie at this house [the Crown] in Oxon, where he was exceedingly respected... Now Sir William [Davenant] would sometimes, when he was pleasant over a glass of wine with his most intimate friends--e.g. Sam Butler, author of Hudibras, etc., say, that it seemed to him that he writ with the very spirit that did Shakespeare, and seemed contented enough to be thought his Son. He would tell them the story as above, in which way his mother had a very light report, whereby she was called a Whore.[2]

It has been suggested that Davenant simply meant that he saw himself as a literary son of Shakespeare, in the same way that followers of Ben Jonson called themselves the "Sons of Ben".[2] However, according to Samuel Schoenbaum, since Aubrey's comment was unpublished, the existence of some other sources saying the same thing suggests that the story that "Sir William was more than Shakespeare's mere poetical offspring was common in Davenant's lifetime."[2] In 1618, after Shakespeare's death, the 12-year-old Davenant wrote an ode "In Remembrance of Master Shakespeare".[3]

He attended Lincoln College, Oxford, for a while in about 1620, but left before gaining any degree, becoming a page to the Duchess of Richmond.[3] In London in 1630, he contracted a venereal disease, and was given a syphilis treatment by Thomas Cademan. As a convalescent, he left for the country in 1632 for a time.[4] The syphilis severely disfigured his nose, resulting in damage that is discreetly depicted in John Greenhill's portrait. His ruined nose was the subject of much ribald comment by his enemies.[5] 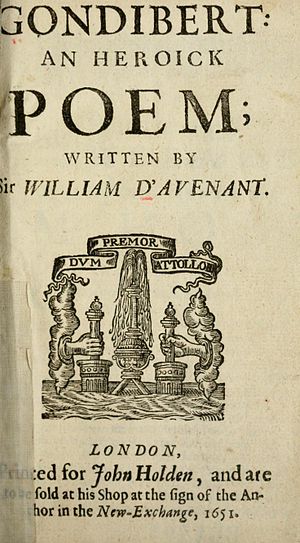 The title page of the 1651 edition of Gondibert

Following the death of Ben Jonson in 1637, Davenant was named Poet Laureate in 1638. He was a supporter of King Charles I in the English Civil War. In 1641, before the war began, he was declared guilty of high treason by parliament along with John Suckling, after he participated in the First Army Plot, a Royalist plan to use the army to occupy London. He fled to France.[6] Returning to join the king's army when the war started, he was knighted two years later by king Charles following the siege of Gloucester.[3]

In 1645, after the decisive Royalist defeat at the Battle of Naseby, he retired to Paris, where he became a Roman Catholic and worked on his epic poem Gondibert. That same year he was appointed Emissary to France, and in 1649 was given the symbolic post of treasurer of the colony of Virginia by the exiled Charles II. The following year, he was made lieutenant governor of Maryland, but was captured at sea, imprisoned, and sentenced to death. He is said to have been saved by the intervention of John Milton.[6] He spent all of 1651 in the Tower of London, where he continued writing Gondibert.[3]

On his release in 1652, he immediately published Gondibert, but he was only pardoned in 1654. In order to avoid the strict laws of censorship in force in all public places at the time, he turned a room of his home, Rutland House, into a private theatre where his works, and those of other writers considered seditious, could be performed. A performance of his The Siege of Rhodes at Rutland House in 1656 is considered to be the first performance of an English opera, and also included England's first known professional actress, Mrs Coleman.[7]

Davenant once again found himself in legal trouble in 1659, when he was imprisoned for his part in Sir George Booth's uprising in Cheshire after the death of Cromwell. He was, however, released the same year, and left once more for France. When Charles II was restored to the throne, Davenant returned to England. The Restoration also led to the re-opening of theatres, which had been closed due to the influence of the puritans under Cromwell. In 1660, he is publicly recorded as being one of the two theatrical patentees, along with Thomas Killigrew, who obtained a monopoly of public theatre performances.[6] He headed the Duke of York's Men and produced highly successful theatrical seasons at Lincoln's Inn Fields from 1660 until his death in 1668. Among his more successful productions were some Shakespeare plays, including: Hamlet, Henry VIII, and Macbeth, as well as non-Shakespeare plays such as Sir Samuel Tuke's The Tragedy of Five Hours and John Dryden's comedy Sir Martin Marall. He had returned to England sometime before the initial production of his adaptation of Shakespeare's The Tempest, written with John Dryden, who would be named the next Laureate in 1670.

He died in London on 7 April 1668, shortly after his final play, The Man's the Master, was first performed. He is buried in Poets' Corner at Westminster Abbey where the inscription on his tablet reads "O rare Sir William Davenant." It has been noted that the original inscription on Ben Jonson's tablet, which was already removed by the time Davenant died, was "O Rare Ben," which was the name Shakespeare supposedly had for Jonson. Both are puns on the Latin "orare", meaning "pray for".

Nine of his works, though they were previously licensed or produced in London during his life as were all of his plays, were finally published in print posthumously. Several of these were included in The Works of Sr William D'avenant Kt., by Henry Herringman in 1673, which was copied from Davenant's own originals.

Epic poems and books of poetry

Each year links to its corresponding "[year] in poetry" article:

Each year links to its corresponding "[year] in poetry" article:

Revisions, adaptations and other productions for the stage