William Derham FRS (26 November 1657 – 5 April 1735)[1] was an English clergyman, natural theologian and natural philosopher. He produced the earliest, reasonably accurate estimate of the speed of sound.

William Derham was the son of Thomas Derham. He was born at Stoulton, in Worcestershire, England. He was educated at Blockley, Gloucestershire and at Trinity College, Oxford from 1675 to 1679.[1] He was ordained on 29 May 1681. In 1682, he became vicar of Wargrave, Berkshire and from 1689 to 1735 he was Rector at Upminster, Essex. While at Upminster, in 1716 he became a Canon of Windsor and the vestry minutes show that thereafter he divided his time between those two places. The parish registers of Upminster record his burial at St. Laurence's in 1735. However, the precise site of his grave is unknown and, in accordance with his wishes, there is no memorial to him in the church.[2] 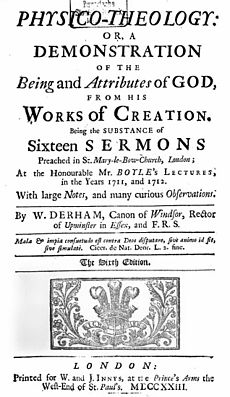 In 1696, he published his Artificial Clockmaker, which went through several editions. The best known of his subsequent works are Physico-Theology, published in 1713; Astro-Theology, 1714; and Christo-Theology, 1730. All three of these books are teleological arguments for the being and attributes of God, and were used by William Paley nearly a century later. However, these books also include quantities of original scientific observations. For example, Physico-Theology contains his recognition of natural variation within species and that he knew that Didelphis virginialis (the Virginia opossum) was the only marsupial in North America. Similarly, Astro-Theology includes several newly identified nebulae (this was the name used at the time for all extended astronomical objects: some of his nebulae are what we would now call star clusters). His 16-feet long telescope (also used when measuring the velocity of sound) was at the top of the tower of St Laurence's Church, where the necessary doors are still in place.[2]

On 3 February 1703, Derham was elected Fellow of the Royal Society. He was Boyle lecturer in 1711–1712. His last known work, entitled A Defence of the Church's Right in Leasehold Estates, appeared as early as 1731.

But besides the works published in his own name, Derham contributed a variety of papers to the Transactions of the Royal Society. He revised the Miscellanea Curiosa. He edited the correspondence and wrote a biography of John Ray, whose 'physico-theology' (natural theology) tradition he continued, making him an early parson-naturalist.[3]

He edited Eleazar Albin's Natural History, and published some of the manuscripts of the scientist Robert Hooke. His meteorological observations at Upminster (in the Transactions of the Royal Society) are amongst the earliest series in England.