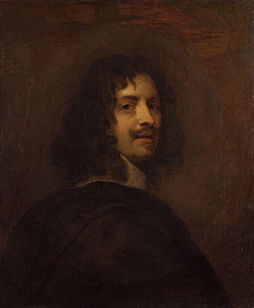 Self-portrait
For other people of the same name, see William Dobson (disambiguation).

William Dobson (24 February 1611 (baptised) – 28 October 1646 (buried)[1]) was a portraitist and one of the first notable English painters, praised by his contemporary John Aubrey as "the most excellent painter that England has yet bred".[2] 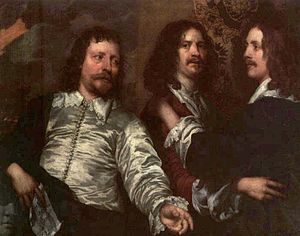 The artist with Nicholas Lanier and Sir Charles Cottrell, circa 1645. 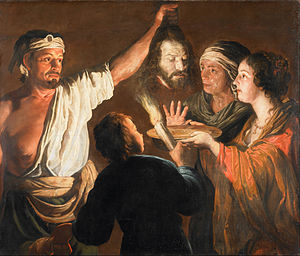 William Dobson - The Executioner with the Head of John the Baptist

Dobson was born in London, the son of a decorative artist also called William Dobson, and was apprenticed to William Peake and probably later joined the studio of Francis Cleyn. He is believed to have had access to the Royal Collection and to have copied works by Titian and Anthony van Dyck, the court painter of King Charles I of England. The colour and texture of Dobson's work was influenced by Venetian art, but Van Dyck's style has little apparent influence on Dobson. One story tells that Van Dyck himself discovered Dobson when he noticed one of the young artist's pictures in a London shop window. There is, however, no evidence to support this, nor do we know how he gained his introduction to the King, who had Dobson paint himself, his sons and members of the court. 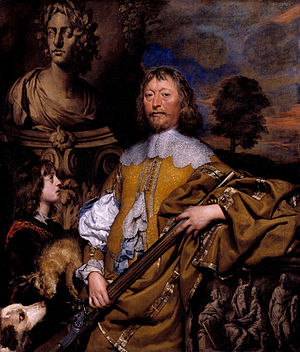 Dobson was only able to make a modest living in the 1630s, but when Van Dyck died in 1641, he was able to get more royal commissions. He became serjeant painter to the king and groom of the privy chamber.[1] During the English Civil War Dobson was based at the Royalist centre of Oxford and painted many leading Cavaliers. His portrait of the future Charles II as Prince of Wales at the age of around twelve is a notable baroque composition, and perhaps his finest work. He also painted the Duke of York, Prince Rupert of the Rhine and Prince Maurice. 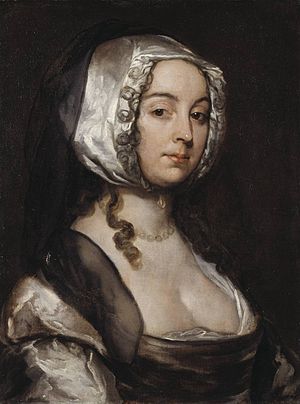 Portrait thought to be of the artist's second wife, Judith[3]

Around sixty of Dobson's works survive, mostly half-length portraits dating from 1642 or later. The thick impasto of his early work gave way to a mere skim of paint, perhaps reflecting a wartime scarcity of materials. After Oxford fell to the Parliamentarians, in June 1646, Dobson returned to London. Now without patronage, he was briefly imprisoned for debt and died in poverty at the age of thirty-six.

Ellis Waterhouse described Dobson as "the most distinguished purely British painter before Hogarth",[4] and in the view of Waldemar Januszczak he was "the first British born genius, the first truly dazzling English painter."[5]

The anniversary of his birth in 2011 was marked by exhibitions, a 'Dobson Trail' listing his paintings on a website, and a BBC television profile by Januszczak, The Lost Genius of British Art: William Dobson.[6]

He was married twice, first to Elizabeth, whose surname and the date of their marriage is unknown. She was buried in St Martin-in-the-Fields on 26 September 1634. On 18 December 1637 he married Judith Sander, who survived him.[1]