Born to William and Ann Forster, Quaker parents at Bradpole, near Bridport in Dorset, he was educated at the Quaker school at Tottenham, where his father's family had long been settled, and on leaving school he was put into business. He declined to enter a brewery and became involved in woollen manufacture in a large way in Burley-in-Wharfedale, Bradford, Yorkshire. In 1850 he married Jane Martha, eldest daughter of Dr Thomas Arnold. She was not a Quaker and so her husband was formally read out of meeting for marrying her, but the Friends who were commissioned to announce the sentence "shook hands and stayed to luncheon". Forster thereafter ranked himself as a member of the Church of England.

The Forsters had no natural children, but when Mrs Forster's brother, W. D. Arnold, died in 1859, leaving four orphans, the Forsters adopted them as their own. One of these children was H. O. Arnold-Forster, a Liberal Unionist member of parliament, who eventually became a member of Balfour's cabinet. Another was Florence Arnold-Forster, who wrote a journal about family life and politics in the 1880s.[1] The youngest child, Frances, compiled the first systematic study of English church dedications, published in 1899 as 'Studies in English Church Dedications or England's Patron Saints (London 1899)

William Forster became known as a practical philanthropist early. In 1846–47, he accompanied his father to Ireland as distributor of the Friends' relief fund for the famine in Connemara, and the state of the country made a deep impression on him. He gradually began to take an active part in public affairs by speaking and lecturing.

In 1859, he stood as Liberal candidate for Leeds, but lost. But he was highly esteemed in the West Riding, and in 1861 was returned unopposed for Bradford. He was returned again in 1865 (unopposed) and in 1868 (at the head of the poll). He took a prominent part in parliament in the debates on the American Civil War, and in 1865 was made Under-Secretary of State for the Colonies in Lord John Russell's ministry. It was then that he first became a prominent advocate of imperial federation. In 1866, his attitude on parliamentary reform attracted a good deal of attention. 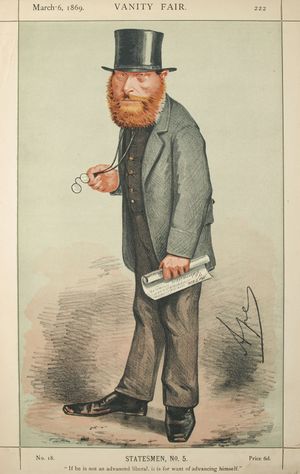 Directly after the Reform Bill had passed, Forster and Edward Cardwell brought in Education Bills in 1867 and 1868. In 1868, when the Liberal party returned to office, Forster was appointed Vice-president of the Council, with the duty of preparing a government measure for national education. The Elementary Education Bill was introduced on 17 February 1870 and school boards were set up with elected representatives (for example, Charles Reed in London) the same year where possible. The religious difficulty at once came to the front. The Manchester Education Union and the National Education League/Birmingham Education League had already formulated in the provinces the two opposing theories, the former standing for the preservation of denominational interests, the latter advocating secular rate-aided education as the only means of protecting Nonconformity against the Church.

The Dissenters were by no means satisfied with Forster's "conscience clause" as contained in the bill, and they regarded him, the ex-Quaker, as a deserter from their own side. They resented the "25th clause", permitting school boards to pay the fees of needy children at denominational schools out of the rates, as an insidious attack upon their interests. By 14 March, when the second reading came on, the controversy had assumed threatening proportions; and George Dixon, the Liberal member for Birmingham and chairman of the National Education League, moved an amendment, the effect of which was to prohibit all religious education in board schools. The government made its rejection a question of confidence, and the amendment was withdrawn; but the result was the insertion of the Cowper-Temple clause (which prohibited the use of distinctive religious formularies in a rate-supported school) as a compromise before the bill passed. The bill of 1870, imperfect as it was, established at last some approach to a system of national education in England.

Forster's next important work was in passing the Ballot Act 1872. In 1874, he was again returned for Bradford. In 1875, when Gladstone "retired," Forster was strongly supported for the leadership of the Liberal party, but declined to be nominated. In the same year he was elected to the Royal Society, and made Lord Rector of Aberdeen University. In 1876, when the Eastern question was looming large, he visited Serbia and Turkey, and his subsequent speeches on the subject were marked by moderation. On Gladstone's return to office in 1880, he was made Chief Secretary for Ireland. He carried the Compensation for Disturbance Bill through the Commons, only to see it thrown out in the Lords. On 24 January 1881, he introduced a new Coercion Bill in the House of Commons, to deal with the growth of the Land League, and in the course of his speech declared it to be "the most painful duty" he had ever had to perform. The bill passed, among its provisions being one enabling the Irish government to arrest without trial persons "reasonably suspected" of crime and conspiracy. 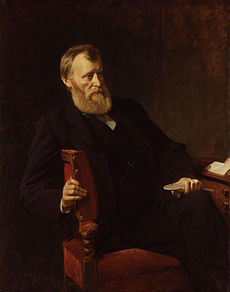 The Irish party used every opportunity to oppose this act, and Forster was kept constantly on the move between Dublin and London, conducting his campaign and defending it in the House of Commons.

He was nicknamed "Buckshot" by the Nationalist press, on the supposition that he had ordered its use by the police when firing on a crowd.

On 13 October, Charles Stewart Parnell was arrested, and soon after the Land League was proclaimed. From that time Forster's life was in danger, and he had to be escorted by mounted police in Dublin.

Several plans to murder him were frustrated by the merest accidents. On 2 May 1882, Gladstone announced that the government intended to release Parnell and his fellow-prisoners in Kilmainham, and that both Lord Cowper-Temple and Forster had in consequence resigned; on the following Saturday, Forster's successor, Lord Frederick Cavendish, was murdered in Phoenix Park, Dublin.

During the remaining years of his life, Forster's political record covered various interesting subjects, but his efforts in Ireland threw them all into shadow. He died on the eve of the introduction of the First Home Rule Bill, which he opposed.

Forster is referred to as 'Buckshot' in the Irish folk song "Monto" made famous by The Dubliners.

There is a memorial to him in his home village of Bradpole.[1]