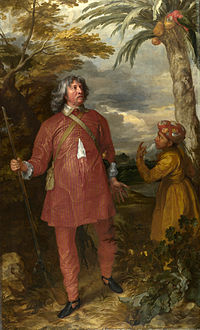 The 1st Earl of Denbigh by Anthony van Dyck

William Feilding was the son of Basil Fielding of Newnham Paddox in Warwickshire, (High Sheriff of Warwickshire in 1612), and of Elizabeth, daughter of Sir Walter Aston (1530–1599) and his wife, Elizabeth (née Leveson).[2][3][lower-alpha 1]

Feilding matriculated at Queens' College, Cambridge in 1603.[5] Knighted on 4 March 1607,[1] he was created Baron and Viscount Feilding in 1620. Two years later he was appointed Master of the Great Wardrobe and Custos Rotulorum of Warwickshire and Earl of Denbigh on 14 September 1622.,[1][2] He attended Prince Charles on the Spanish adventure, served as Admiral in the unsuccessful Cadiz Expedition in 1625, and commanded the disastrous attempt upon Rochelle in 1628, becoming the same year a member of the Council of war, and in 1633 a Member of the Council of Wales and the Marches. In 1631, Lord Denbigh visited the East.[2]

On the outbreak of the English Civil War he served under Prince Rupert of the Rhine and was present at the Battle of Edgehill. On 3 April 1643 during Rupert's attack on Birmingham he was wounded and died from the effects on the 8th, being buried at Monks Kirby in Warwickshire. His courage, unselfishness and devotion to duty are much praised by the Edward Hyde, Earl of Clarendon.[2]

In 1606 Feilding married Susan, daughter of Sir George Villiers, sister of the future Duke of Buckingham, and on the rise of Buckingham received various offices and dignities. Sir William and his wife Susan Villiers had five children:

His daughter, Lady Margaret Feilding (1613–1638), also known as Mary, was married to James Hamilton, 1st Duke of Hamilton, one of the heirs to the throne of Scotland after the descendants of James VI (James I of England). Her portrait was painted by Anthony van Dyck and Henry Pierce Bone. One of his two sons, George Feilding, was the 1st Earl of Desmond.