Not to be confused with Sir William Fettes Douglas 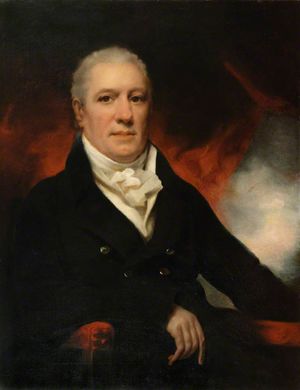 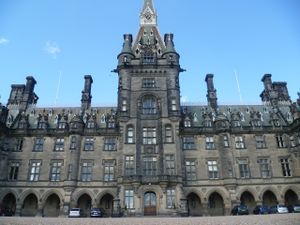 Sir William Fettes, 1st Baronet (25 June 1750 – 27 May 1836) was a wealthy Scottish businessman and philanthropist, who left a bequest which led to the foundation of Fettes College, in Edinburgh.

Fettes' family came from north east Scotland, where the name can be encountered in such variants as "Vettese" (cf. the Scottish writer Raymond Vettese), "Fittes" and "Fiddes".

The eldest son of William Fettes, an Edinburgh merchant, and his wife Margaret, daughter of James Rae, he was born on 25 June 1750 and at 8 years old was sent to the Royal High School in Edinburgh.[1] When he was eighteen years old he commenced his business life, trading in wine and tea from premises in the High Street. In 1787 he married Maria Malcolm and very quickly they had their only son, also William. His life covered a period of economic expansion in Scotland and, at the commencement of the Napoleonic Wars, he was ideally placed to establish connections with Durham, Leeds and Newcastle becoming an Underwriter, a military contractor and, in 1800, a director of the British Linen Bank.

A merchant, and underwriter, Fettes lived not far from the school’s present location on Comely Bank, in the Stockbridge district of Edinburgh. He had made his money trading tea during the Napoleonic wars, and used this to buy the estate of Comely Bank.[2] He was by then living at Comely Bank in the Stockbridge district of Edinburgh and he had other estates which he had bought but he was to retire from trade in 1800 to look after these interests. He was involved in many public charities and the general welfare of Edinburgh, serving as Lord Provost of Edinburgh from 1804 to 1806 (two elected sessions). He became a baronet in 1804.

In 1815, his only son, William Fettes died of typhoid in Berlin, on a tour of Europe, at the young age of 27. He had been admitted to the Faculty of Advocates in 1810 five years previously. Now without an heir, Fettes was to live on to May 1836, predeceasing his wife by just three weeks.

In later life Fettes lived at 13 Charlotte Square and this is where he died.[3]

Fettes had originally intended that money from his estate should pay for a hospital rather than a school but he later decided to make it a school for orphans and the needy. In his will he made a bequest which was to lead to the foundation of Fettes College.

His bequest, of £166,000, in memory of his only son, was for the endowment of a school for orphaned or needy children. Fettes College, cannot be taken to fulfil this bequest as it is an exclusive and expensive private school these days. 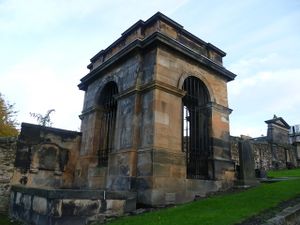 "It is my intention that the residue of my whole estate should form an endowment for the maintenance, education and outfit of young people whose parents have either died without leaving sufficient funds for that purpose, or who from innocent misfortune during their lives, are unable to give suitable education to their children."

After his death the bequest was effected and invested. His Trustees allowed the investments to accumulate for more than twenty five years before they decided that with £166,000, there was enough capital with which to acquire the land, to found the school, and to fund scholarships.

The main school building was designed by David Bryce, nearly twenty years after Fettes’ death, and the school itself opened in 1870, 34 years after Sir William’s death. Fettes College thus opened with 53 pupils (40 were Foundation Scholars with 11 others boarding & 2 day pupils) and by 1875 there were 200 boys enrolled.