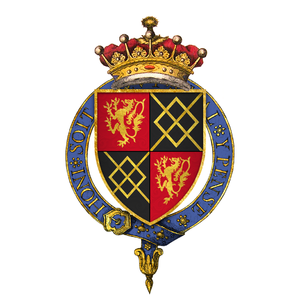 He was a son of John FitzAlan, 13th Earl of Arundel, and Eleanor Berkeley. His mother was a daughter of John Berkeley and Elizabeth Betteshorne, granddaughter of Thomas de Berkeley, 3rd Baron Berkeley, and his second wife Catherine Clivedon.

His elder brother John FitzAlan, 14th Earl of Arundel, died on 12 June 1435. The title passed to John's nephew Humphrey FitzAlan, 15th Earl of Arundel, who was only a six-year-old with no descendants. William thus became the heir presumptive and, when Humphrey died three years later on 24 April 1438, he succeeded to the title.

William and Joan had six children:

William was summoned to the 'Loveday' council of February 1458, designed to reconcile feuding noble factions (and indeed, he was instructed to stop 'foot-dragging' and attend),[2] and later fought in the Second Battle of St Albans (22 February 1461) as a supporter of the House of York. The Yorkists were commanded by his brother-in-law Richard Neville, 16th Earl of Warwick.

Edward IV of England named him a Knight of the Garter in 1471, probably in honour of his support during the Wars of the Roses. He was Warden of the Cinque Ports in 1471 and from 1483 to 1488.