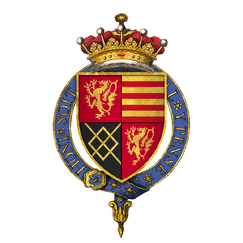 FitzAlan was the son of Thomas FitzAlan, 17th Earl of Arundel, and Margaret Woodville (d. before 6 March 1490), second daughter of Richard Woodville, 1st Earl Rivers, and a younger sister of Elizabeth Woodville, wife of Edward IV.[1]

He married firstly, after 1501, Elizabeth Willoughby, daughter of Robert Willoughby, 1st Baron Willoughby de Broke, and secondly, on 15 February 1510 he married Lady Anne Percy, a daughter of the 4th Earl of Northumberland. He succeeded to the title of 18th Earl of Arundel on the death of his father Thomas in 1524 and became Lord Chamberlain in 1526.

FitzAlan bore the Sceptre with the Dove at the coronation of Anne Boleyn in 1533 and later took part in her trial in 1536. During the Dissolution of the Monasteries he was given large areas of land in Sussex, including Michelham Priory. He died in 1544 and was buried at Arundel Castle.

His only son was Henry Fitzalan, 19th Earl of Arundel.