Sir William Fox, KCMG (2 September 1812[1] – 23 June 1893) was the second Premier of New Zealand on four occasions in the 19th century, while New Zealand was still a colony. He was known for his confiscation of Māori land rights, his contributions to the education system (such as establishing the University of New Zealand), and his work to increase New Zealand's autonomy from Britain. He has been described as determined and intelligent, but also as bitter and "too fond" of personal attacks. Different aspects of his personality are emphasised by different accounts, changing mainly due to the reviewers' political beliefs.

Fox was born on 2 September 1812 at 5 Westoe Village in South Shields, in north east England. His family was a relatively successful one. He was educated initially at Durham School and then at Wadham College, Oxford. His activities for several years after graduating are a mystery: some speculate that he was not in England. In 1838 he studied law in London.[2]

Shortly after qualifying to practice as a lawyer, Fox married Sarah Halcomb. The couple decided that they would emigrate to New Zealand, joining an increasing number of other colonists. Upon his arrival in Wellington Fox's legal qualifications were recognised, but there was little work, and so he supplemented his income by writing for local periodicals. Fox lost the right to practice as a lawyer when, in 1843, he refused to swear an oath that he considered "degrading". This event forced him to focus almost entirely on writing and journalism.

Initially, Fox was opposed to government negotiations with Māori over land, stating that Māori had a right only to land that they used. He also condemned the colonial government's "weak" response to the killing of Arthur Wakefield, a New Zealand Company official who had attempted to expand the settlement at Nelson into Māori-held lands. Fox's criticism of Governor Robert FitzRoy eventually played a part in FitzRoy's removal from office. In 1843 Fox was chosen by the New Zealand Company as Wakefield's replacement in Nelson.

In Nelson, Fox met with mixed success. There was little direct conflict with the Māori, and most of Fox's work was related to economic development. Poor planning and inaccurate land surveying had left colonists with considerably less than had been promised them, and Fox was responsible for resolving the matter. While many modern historians believe that he did a good job, Fox himself found that even his best efforts were not good enough for the angry colonists. Fox increasingly spent his time leading parties into the wilderness near Nelson, an activity which he seems to have enjoyed. Fox was physically active all through his life.

In 1848, William Wakefield died. As the New Zealand Company's senior officer in the colony, he was Fox's superior. Fox quickly travelled to Wellington, and managed to secure himself Wakefield's position. He accomplished this mainly because of the short distance between Nelson and Wellington, which enabled him to win the position before instructions could be received from other cities. He was not the first choice of the Company's board in London, which preferred Dillon Bell, but his quick action managed to gain him enough support to receive the appointment.

The Company was in decline after the deaths of both Edward and Arthur Wakefield. Fox gradually became less active in the Company, taking more of an interest in the colonial government. He was a strong opponent of Governor George Grey, who was refusing to grant self-government to the settlers. He frequently denounced the administration and the judiciary as corrupt and incompetent.

In 1851, Fox travelled to London on behalf of a group of Wellington settlers. There he met Edward Gibbon Wakefield, elder brother of William and Arthur. He discussed his ideas about a constitution for New Zealand, strongly supporting self-rule, provincial autonomy, and two elected houses of parliament. He also attempted to meet Earl Grey, the British minister for colonial possessions, but was refused. When a constitution was promulgated the following year it incorporated some of Fox's ideas, but was not satisfactory to him.

Before returning to New Zealand, Fox and his wife spent some time travelling in Canada, the United States, and Cuba. When they returned to New Zealand, the new constitution was in effect, and elections had already been held. In 1855 Fox was elected MP for Wanganui. He fought on a strong platform of provincial autonomy, and was particularly opposed to the government formed the following year by Henry Sewell, who took the newly created office of Premier of New Zealand. Fox managed to oust Sewell from the new post in only 13 days, becoming New Zealand's second Premier. Fox, however, lasted only 13 days himself before being ousted by Edward Stafford. Fox spent the first years of Stafford's premiership in semi-retirement, but later returned to be Stafford's primary opponent in parliament.

Fox appears to have changed his views somewhat regarding Māori land rights, as he strongly opposed the government's policy on that issue. He blamed Stafford's administration, along with Governor Thomas Gore Browne, for the wars in Taranaki, which broke out when a Māori chief refused to sell his land. Fox was widely believed to have converted to support of the Māori, although many modern historians claim that his opposition to land seizure was due to a pragmatic wish to avoid war, not a change of philosophy. Lack of evidence makes it difficult to tell which was the case. 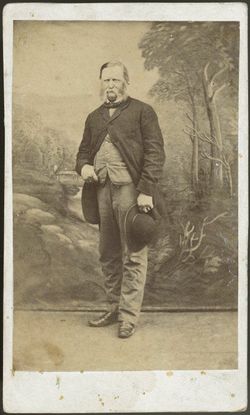 In 1861, Fox successfully proposed a vote of no confidence in Stafford, and took the premiership again. Among the measures introduced were law changes designed to accommodate Māori political structures, a halt on attempts to acquire Māori land, and a less confrontational attitude in existing conflicts. Again, dispute exists as to whether this was motivated by pragmatism or support of Māori rights. His attempts to reduce conflict with Māori were undermined by Governor Grey, who had returned for another term, and was a strong believer in the need to confront Māori militarily. Grey's construction of military infrastructure and his deployment of troops reduced Māori trust of any initiatives by the government.

After becoming increasingly involved in a dispute with Grey over responsibility for policy towards Māori, Fox lost a vote of confidence in 1862. The following year he returned to government, but only as a minister - the premiership went to Frederick Whitaker. Fox appears to have had little to do with the policies of this government, which involved considerable confiscations of land from the Māori. After his term as a minister ended, Fox and his wife travelled in Australia for several years.

Upon returning to New Zealand, Fox was encouraged by the Opposition to return to politics, which was once again dominated by Fox's rival Edward Stafford. Fox was elected to parliament, and relaunched his attack on Stafford's policies on Māori relations and provincial affairs. Fox defeated Stafford in 1869, taking the premiership for the third time. Fox set about reducing military activities, and ceased any major attempts to engage the Māori with force. Increasingly Fox found himself overshadowed by his treasurer, Julius Vogel. Vogel's extensive plans for the development of New Zealand, involving borrowing money to finance public works, soon became the most prominent feature of Fox's government, but had little to do with Fox himself. Eventually, Fox began to abandon his leadership role within the government, and the resulting disunity allowed Stafford to defeat Fox in 1872.

After this, Fox decided that he would not seek further office. His role in politics, however, was not quite over - when George Waterhouse, Stafford's successor, suddenly resigned, Fox was called upon to assume the premiership as a caretaker until a new leader was found. When Vogel returned to New Zealand from an overseas trip Fox stepped down, and Vogel's premiership began.

In 1868 at Te Ngutu O Te Manu (Beak of the bird), a battle took place between the forces of the Hah Hau rebel Titokaworu and the Colonial army commanded by Thomas McDonnell. The colonial forces were ambushed and retreated. During the retreat, two Maori scouts found 2 boys about 6. One boy was killed. The Maori scout, Pirimona, gave the other boy to Herewini of the Ngati Te Upokoiri Iwi. The captive was Ngatau Omahuru.

While in Whanganui he came to the attention of the magistrate Walter Buller, who purchased the boy a set of European clothes and boots. The boys picture was taken in these clothes. The Buller family looked after the boy.

He was baptised William Fox in the presence of William Fox senior, then an MP. The boy was taken to Wellington by coach, probably on 25 January 1869. He was housed at the Native Hostelry where visiting Maori lodged, lived there for 3 years, and was educated at a private school called Mowbray's near the hostelry. Three other Maori students - 2 of them the sons of Chief Wi Tako, attended the same school. The adopted son then moved in with the Fox family. According to Maori sources William Junior and Mrs Sarah Fox, who had no children, became very close. He lived with the family until he was about 12.

In 1874 he was enrolled in the new Wellington College where he had a photo taken with the other students and staff on Inauguration Day 1874. In 1875 The Fox family took William Junior on a world tour - San Francisco by paddle steamer, then across the USA and onto Great Britain to visit Fox relatives.

At 16 William junior joined a law firm as a clerk with Buller, Lewis and Gully, where he received about 5 years training. On a trip to the Taranaki area in 1878 he met members of his tribe and a young Maori woman Hinemoa. He met the Maori leaders; Te Whiti and Tohu at Parihaka, and made the decision to live in Taranaki. It appears he was heavily influenced by Te Whiti and Tohu and at some stage had an office in Tohu's meeting house at Parihaka. He set up a Maori school near Parihaka.

Later after the closure of Parihaka he worked as a translator and interpreter in Whanganui and then set up a business in Hawera teaching Maori language. He never married. He corresponded with old soldiers about the Taranaki Wars and died in 1918.

In 1879 Fox was created a Knight Commander of the Order of St Michael and St George.

The town of Foxton, founded in 1885, was named after Sir William.