Grenville was the son of Whig Prime Minister George Grenville. His mother Elizabeth was daughter of the Tory statesman Sir William Wyndham Bart. He had two elder brothers Thomas and George - he was thus uncle to the 1st Duke of Buckingham and Chandos.

He was also related to the Pitt family by marriage; William Pitt, 1st Earl of Chatham had married his father's sister Hester, and thus the younger Grenville was the first cousin of William Pitt the Younger.

Grenville entered the House of Commons in 1782. He soon became a close ally of the Prime Minister, his cousin William Pitt the Younger, and served in the government as Paymaster of the Forces from 1784 to 1789. In 1789 he served briefly as Speaker of the House of Commons before he entered the cabinet as Home Secretary. He became Leader of the House of Lords when he was raised to the peerage the next year as Baron Grenville, of Wotton under Bernewood in the County of Buckingham.[2] The next year, in 1791, he succeeded the Duke of Leeds as Foreign Secretary. Grenville's decade as Foreign Secretary was a dramatic one, seeing the Wars of the French Revolution. During the war, Grenville was the leader of the party that focused on the fighting on the continent as the key to victory, opposing the faction of Henry Dundas which favoured war at sea and in the colonies. Grenville left office with Pitt in 1801 over the issue of Catholic Emancipation.

In his years out of office, Grenville became close to the opposition Whig leader Charles James Fox, and when Pitt returned to office in 1804, Grenville did not take part. Following Pitt's death in 1806, Grenville became the head of the "Ministry of All the Talents", a coalition between Grenville's supporters, the Foxite Whigs, and the supporters of former Prime Minister Lord Sidmouth, with Grenville as First Lord of the Treasury and Fox as Foreign Secretary as joint leaders. Grenville's cousin William Windham served as Secretary of State for War and the Colonies, and his younger brother, Thomas Grenville, served briefly as First Lord of the Admiralty. The Ministry ultimately accomplished little, failing either to make peace with France or to accomplish Catholic emancipation (the later attempt resulting in the ministry's dismissal in March, 1807). It did have one significant achievement, however, in the abolition of the slave trade in 1807.

In the years after the fall of the ministry, Grenville continued in opposition, maintaining his alliance with Lord Grey and the Whigs, criticising the Peninsular War and, with Grey, refusing to join Lord Liverpool's government in 1812. In the post-war years, Grenville gradually moved back closer to the Tories, but never again returned to the cabinet. His political career was ended by a stroke in 1823. Grenville also served as Chancellor of the University of Oxford from 1810 until his death in 1834. 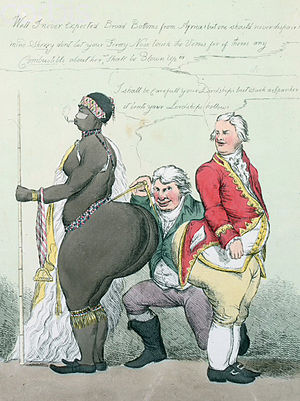 A caricature of Saartjie Baartman, Lord Grenville, and Richard Sheridan by William Heath

Dropmore House was built in the 1790s for Lord Grenville. The architects were Samuel Wyatt and Charles Tatham. Grenville knew the spot from rambles during his time at Eton College, and prized its distant views of his old school and of Windsor Castle. On his first day in occupation, he planted two cedar trees. At least another 2,500 trees were planted. By the time Grenville died, his pinetum contained the biggest collection of conifer species in Britain. Part of the post-millennium restoration is to use what survives as the basis for a collection of some 200 species.[3]

Lord Grenville married the Honourable Anne, daughter of Thomas Pitt, 1st Baron Camelford, in 1792. The marriage was childless. He died in January 1834, aged 74, when the barony became extinct. Lady Grenville died in June 1863.[1]

Main article: Ministry of All the Talents