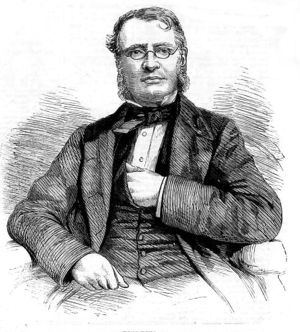 Adams was born in 1809 and was the son of Thomas Adams of Normancross, Huntingdonshire. While still a boy he entered a printing office as a compositor. He read law in his spare time and in 1843 was called to the bar of the Middle Temple. He also worked as a law reporter for the Morning Herald.[2]

His first judicial appointment was as Recorder of Derby in 1858 while still a member of Parliament.

Adams fell ill in 1865 and died, at the age of 56, at the home of his son Captain Adams in Wales on 29 August 1865. Adams had been well liked in Hong Kong and a local paper carried the following eulogy:

"It is almost too painful for us to speak of his many estimable qualities, at a time when admiration ought properly give way to grief. There cannot be two opinions as to the ability with which he discharged the duties of his office. A juster more conscientious and abler man never sat upon the Bench in this Colony. Every one must admit that his judgements were delivered with care and with admirable wisdom. He was one of best men that ever came to China or left it."[5]