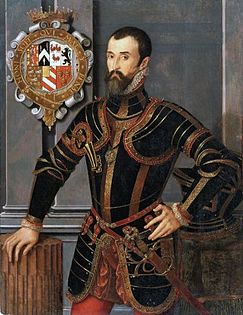 The young William Herbert wearing a Greenwich armour. Portrait at the National Museum in Cardiff. 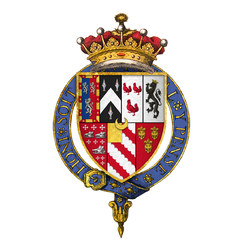 Herbert was the son of Sir Richard Herbert and Margaret Cradock.[1] His father was an illegitimate son of William Herbert, 1st Earl of Pembroke of the eighth creation (1468) by his mistress, Maud, daughter of Adam ap Howell Graunt.[1]

William Herbert's early life was distinguished by intense ambition coupled with an equally fierce temper and hot-headed nature. Described by John Aubrey as a "mad fighting fellow," the young Herbert began his career as a gentleman servant to the earl of Worcester. However, when he killed a city sheriff after being arrested for unknown reasons in Bristol, he fled to France.

Upon arrival, he immediately joined the service of King Francis I as a soldier, earning a reputation for courage and great skill on the battlefield. "In a short time he became eminent, and was favoured by the king, who afterwards recommended him to Henry VIII of England, who much valued him, and heaped favours and honours upon him." For his service to King Henry, Herbert was granted the estates of Wilton, Remesbury, and Cardiff Castle, and his position as a man of means was secured.

Herbert's first wife, Anne Parr, was sister of Queen consort Catherine Parr, sixth wife to King Henry VIII. He rose with the Parrs after his sister-in-law's marriage and was knighted in 1544. He had been granted Wilton Abbey and other land by Henry VIII by 1544. He pulled down the abbey, and built the first Wilton House in the 1540s. 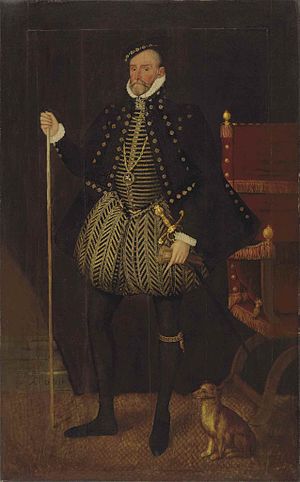 Herbert was a guardian of the young King Edward VI after the death of Henry VIII in 1547. He was made a Knight of the Garter in 1549, and created Baron Herbert of Cardiff on 10 October 1551, and 1st Earl of Pembroke of the [tenth creation] the following day by Edward VI. Herbert made significant improvements and alterations to Cardiff Castle to make it a more appropriate residence for a rising statesman, of which only the Herbert Tower now remains.

After the death of Edward VI, Herbert initially supported Lady Jane Grey's claim to the throne. Herbert arranged the marriage of his eldest son and heir, Henry, to Jane's sister, Lady Catherine Grey, at Durham House on 25 May 1553,[2] the same day as her sister Jane was married to Guilford Dudley. The third couple married that day was the Duke of Northumberland's youngest daughter, Katherine, to Henry Hastings, 3rd Earl of Huntingdon.[2] When it became clear that Lady Mary Tudor would take the throne as Mary I, he cast his daughter-in-law, Catherine, out of his house and had the marriage annulled. Lady Catherine's father and sister, Jane, were both executed for high treason in February 1554 by the orders of Queen Mary I. Herbert managed to distance himself from the Grey family after their fall and obtained the new queen's favour by crushing Thomas Wyatt's rebellion. In 1557 the English army under the Earl of Pembroke did not arrive in time for the battle of St Quentin, but played a significant role in the capture of the city that followed. Pembroke was Mary's most effective commander at the war with France.

According to John Aubrey's very colourful Brief Life, he could "neither read nor write" but "had a stamp for his name." Aubrey says: "He was of good naturall parts, but very colericque. In Queen Mary's time, upon the return of the Catholique religion, the nunnes came again to Wilton Abbey; and this William, Earl of Pembroke, came to the gate which lookes towards the court by the street, but now is walled up, with his cappe in his hand, and fell upon his knees to the Lady Abbess and nunnes, crying peccavi. Upon Queen Mary's death, the Earl came to Wilton (like a tigre) and turned them out crying, "Out, ye jades! to worke, to worke—ye jades, goe spinne!"

Herbert had a secretary 'Robert Streynsham', who lived in the Parsonage in Ospringe (near Faversham in Kent).[3]

Herbert is reported to have had a close bond with his pet dog. Aubrey writes that he "had a little cur-dog which loved him, and the earl loved the dog. When the earl died the dog would not go from his master's dead body, but pined away, and died under the hearse." Herbert's dog can be seen in the portrait at left.

Herbert had issue by his first wife, Anne Parr, Countess of Pembroke:

After his wife, Anne, died on 20 February 1552, Herbert married Anne Talbot, daughter of George Talbot, 4th Earl of Shrewsbury, and widow of Peter Compton. There was no issue from this marriage.

William died on 17 March 1570, in Hampton Court. He was buried on 18 April 1570 in the Old St Paul's Cathedral where his first wife, Anne (Parr) Herbert, had been buried. His grave and monument were destroyed in the Great Fire of London in 1666. A modern monument in the crypt lists him as one of the important graves lost.