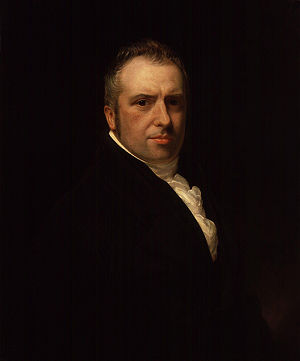 William Hone (3 June 1780 – 8 November 1842) was an English writer, satirist and bookseller. His victorious court battle against government censorship in 1817 marked a turning point in the fight for British press freedom.[2]

Hone was born at Bath, and had a strict religious upbringing. The only education he received was to be taught to read from the Bible. His father moved to London in 1783, and in 1790 Hone was placed in an attorney's office. After two and a half years in the office of a solicitor at Chatham he returned to London to become clerk to a solicitor at Gray's Inn. But he disliked the law, and had learned to think for himself. To the great concern of his father, he joined the London Corresponding Society in 1796, which campaigned to extend the vote to working men and was deeply unpopular with the government, who had tried to charge its leaders with treason.

Hone married in 1800, and started a book and print shop with a circulating library in Lambeth Walk. He soon moved to St Martin's Churchyard, where he brought out his first publication, Shaw's Gardener (1806). It was at this time that he and his friend, John Bone, tried to establish a popular savings bank, and even spoke to the President of the Board of Trade about the project; they were unsuccessful. Bone then joined Hone in a bookseller's business; but bankruptcy was the result.

In 1811, Hone was employed by the booksellers as auctioneer to the trade, and had an office in Ivy Lane. Independent investigations carried on by him into the condition of lunatic asylums led again to business difficulties and failure, but he took a small lodging in the Old Bailey, keeping himself and his now large family by contributions to magazines and reviews. He hired a small shop, or rather box, in Fleet Street but this was twice robbed, and valuable books lent for show were stolen. In 1815 he started the Traveller newspaper, and tried in vain to save Elizabeth Fenning, a cook convicted on thin evidence of poisoning her employers with arsenic. Although Fenning was executed, Hone's 240 page book on the subject, The Important Results of an Elaborate Investigation into the Mysterious Case of Eliza Fenning — a landmark in investigative journalism – demolished the prosecution's case.{ The Laughter of Triumph by Ben Wilson. Pub. 2005 by Faber & Faber}

An unflattering 1819 caricature of the Prince Regent by George Cruikshank, illustrating "The Political House that Jack Built".

From 1 February to 25 October 1817, Hone published the Reformists' Register, using it to criticise state abuses, which he later attacked in the famous political squibs and parodies, illustrated by George Cruikshank. In April 1817 three ex-officio informations were filed against him by the attorney-general, Sir William Garrow. Three separate trials took place in the Guildhall before special juries on 18, 19 and 20 December 1817. The first, for publishing The Late John Wilkes's Catechism of a Ministerial Member (1817), was before Mr Justice Abbot (afterwards Lord Tenterden); the second, for parodying the litany and libelling the Prince Regent in The Political Litany (1817), and the third, for publishing the Sinecurist's Creed (1817), a parody on the Athanasian Creed, were before Lord Ellenborough. 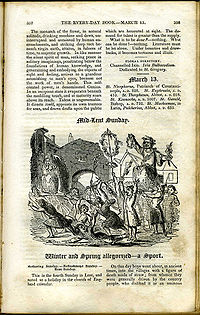 The prosecution took the ground that the prints were harmful to public morals and brought the prayer-book and even religion itself into contempt. The real motives of the prosecution were political: Hone had ridiculed the habits and exposed the corruption of those in power. He went to the root of the matter when he wished the jury "to understand that, had he been a publisher of ministerial parodies, he would not then have been defending himself on the floor of that court." In spite of illness and exhaustion Hone spoke on each of the three days for about seven hours. Although his judges were biased against him, he was acquitted on each count, and the result was received enthusiastically by immense crowds inside and outside the court. Soon afterwards, a public collection was made on his behalf.

Among Hone's most successful political satires were The Political house that Jack built (1819), The Queen's Matrimonial Ladder (1820), Ill favour of Queen Caroline, The Man in the Moon (1820) and The Political Showman (1821), all illustrated by Cruikshank. Many of his squibs are directed against a certain "Dr Slop", a nickname given by him to Dr (afterwards Sir John) Stoddart, publisher of The Times. In researches for his defence he had come upon some curious and at that time little trodden literary ground, and the results were shown by his publication in 1820 of his Apocryphal New Testament, and in 1823 of his Ancient Mysteries Explained. In 1826 he published the Every-day Book, in 1827-1828 the Table-Book, and in 1829 the Year-Book. All three were collections of curious information on manners, antiquities and various other subjects.

These are the works by which Hone is best remembered. In preparing them he had the approval of Robert Southey and the assistance of Charles Lamb, but they were not financially successful, and Hone was lodged in King's Bench Prison for debt. Friends, however, again came to his assistance, and he was established in a coffee-house in Gracechurch Street; but this, like most of his business enterprises, ended in failure. Hone's attitude of mind had gradually changed to that of extreme devoutness, and during the latter years of his life, he became a follower of Rev. Thomas Binney and preached in Binney's Weigh House Chapel, Eastcheap. In 1830 he edited Strutt's Sports and Pastimes of the people of England, and he contributed to the first number of the Penny Magazine. He was also for some years sub-editor of The Patriot. He died at Tottenham and is buried at Dr Watts' Walk in Abney Park Cemetery, Stoke Newington.

A short biography of Hone's life written by his friend and sometime neighbor, Frances Rolleston, was published five years after his death, a revised edition six years later, under the title Some Account of the Conversion from Atheism to Christianity of the Late William Hone.