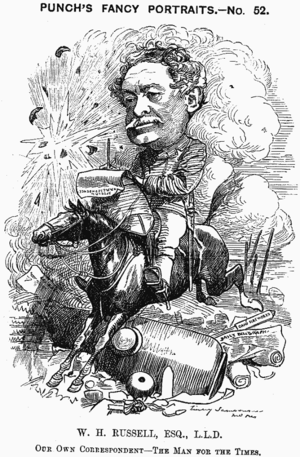 Caricature from Punch, 1881: "Our Own Correspondent—The Man for the Times"

Sir William Howard Russell CVO (28 March 1820, Tallaght, County Dublin, Ireland – 11 February 1907, London) was an Irish reporter with The Times, and is considered to have been one of the first modern war correspondents. He spent 22 months covering the Crimean War, including the Siege of Sevastopol and the Charge of the Light Brigade. He later covered events during the Indian Rebellion of 1857, the American Civil War, the Austro-Prussian War, and the Franco-Prussian War.

As a young reporter, Russell reported on a brief military conflict between Prussian and Danish troops in Denmark in 1850.

Initially sent by editor John Delane to Malta to cover British support for the Ottoman Empire against Russia in 1854, Russell despised the term "war correspondent" but his coverage of the conflict brought him international renown, and Florence Nightingale later credited her entry into wartime nursing to his reports. The Crimean medical care, shelter and protection of all ranks by Mary Seacole[1] was also publicised by Russell and by other contemporary journalists, rescuing her from bankruptcy.

Russell was described by one of the soldiers on the frontlines thus: "a vulgar low Irishman, [who] sings a good song, drinks anyone's brandy and water and smokes as many cigars as a Jolly Good Fellow. He is just the sort of chap to get information, particularly out of youngsters."[2] This reputation led to Russell's being blacklisted from some circles, including British commander Lord Raglan who advised his officers to refuse to speak with the reporter.

His dispatches were hugely significant; for the first time the public could read about the reality of warfare. Shocked and outraged, the public's backlash from his reports led the Government to re-evaluate the treatment of troops and led to Florence Nightingale's involvement in revolutionising battlefield treatment.

On 20 September 1854, Russell covered the battle above the Alma River—writing his missive the following day in an account book seized from a Russian corpse. The story, written in the form of a letter to Delane, was supportive of the British troops though paid particular attention to the battlefield surgeons' "humane barbarity" and the lack of ambulance care for wounded troops. He later covered the Siege of Sevastopol where he coined the phrase "thin red line" in referring to British troops (93rd Highlanders) at Balaclava, writing that "[The Russians] dash on towards that thin red streak topped with a line of steel...".

Following Russell's reports of the appalling conditions suffered by the Allied troops conducting the siege, including an outbreak of cholera, Samuel Morton Peto and his partners built the Grand Crimean Central Railway, which was a major factor leading to the success of the siege.[3]

In 1856 Russell was sent to Moscow to describe the coronation of Tsar Alexander II and in the following year was sent to India where he witnessed the final re-capture of Lucknow (1858).

In 1861 Russell went to Washington, returning to England in 1863. In July 1865 he sailed on the Great Eastern to document the laying of the Atlantic Cable and wrote a book about the voyage[4] with color illustrations by Robert Dudley. He published diaries of his time in India, the American Civil War and the Franco-Prussian War, where he describes the warm welcome given him by English-speaking Prussian generals such as Leonhard Graf von Blumenthal.

He was awarded the title of Commander of the Royal Victorian Order by King Edward VII, who reportedly told Russell "Don't kneel Billy, just stoop"[2] during the ceremony. Russell later accused fellow war correspondent Nicholas Woods of the Morning Herald of lying in his articles about the war to try to improve his stories.

File:William-Howard-Russel-boots.JPG
Display at the Frontline Club featuring the boots of William Howard Russell

In the 1868 General Election Russell ran unsuccessfully as a Conservative candidate for the borough of Chelsea.

He retired as a battlefield correspondent in 1882 and founded the Army and Navy Gazette.

Russell died in 1907 and is buried in Brompton Cemetery, London.

He married twice. His first marriage was to Mary Burrows, of Irish origin. After her death in 1867, he married Countess Antoinette Malvezzi, an Italian. They remained married until his death.

Russell's dispatches via telegraph from the Crimea remain as his legacy; for the first time he brought the realities of war home to readers. This helped diminish the distance between the home front and remote battle fields.

His biography was written by the first special correspondent of the Manchester Guardian[5] John Black Atkins.[6]